Multidrug and toxin extrusion (MATE) proteins are involved in the extrusion of endogenous compounds and xenobiotics across the plasma membrane. They are conserved from bacteria to mammals, with diﬀerent numbers of genes within groups. Here, we present the frst data on identifcation and functional characterization of Mate proteins in zebrafsh (Danio rerio). Phylogenetic analysis revealed six Mates in teleost fsh, annotated as Mate3–8, which form a distinct cluster separated from the tetrapod MATEs/Mates. Synteny analysis showed that zebrafsh mate genes are orthologous to human MATEs. Gene expression analysis revealed that all the mate transcripts were constitutively and diﬀerentially expressed during embryonic development, followed by pronounced and tissue-specifc expression in adults. Functional analyses were performed using transport activity assays with model substrates after heterologous overexpression of fve zebrafsh Mates in HEK293T cells. The results showed that zebrafsh Mates interact with both physiological and xenobiotic substances but also substantially diﬀer with respect to the interacting compounds and interaction strength in comparison to mammalian MATEs/Mates. Taken together, our data clearly indicate a potentially important role for zebrafsh Mate transporters in zebrafsh embryos and adults and provide a basis for detailed functional characterizations of single zebrafsh Mate transporters. 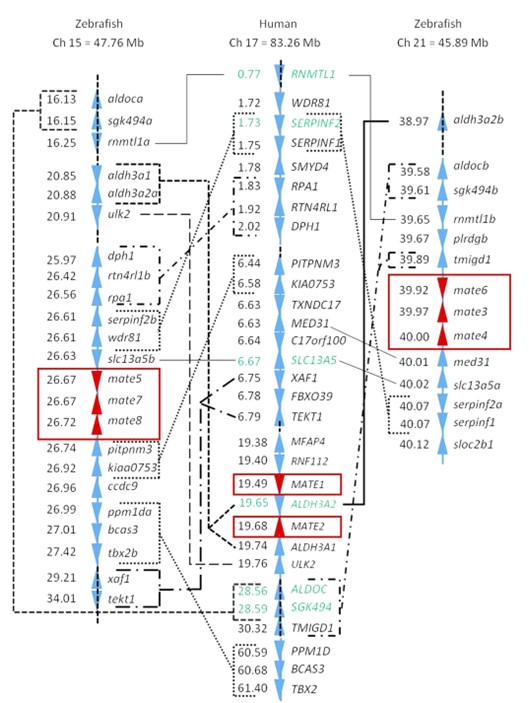