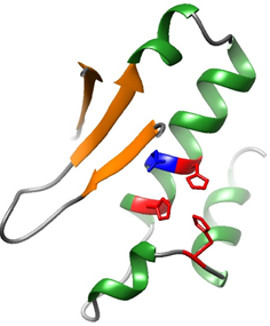 DNA-protein crosslinks (DPCs) are a common type of DNA damage which appear when a protein forms an irreversible covalent bond with the DNA. Under physiological conditions these lesions are caused by reactive oxygen and nitrogen species, DNA helical alterations and increased aldehyde concentration due to histone demethylation, AlkB-type repair, amino acid metabolism, and lipid peroxidation. DPCs are also induced by exogenous sources such as UV light, ionizing radiation and chemotherapeutics. These lesions are very diverse because any protein in proximity to DNA can be crosslinked upon exposure to endogenous or exogenous crosslinking sources. DPCs are also intricately complex due to the diversity of crosslinking chemistries and protein sizes.

DPCs present a physical blockage to all DNA transactions: replication, transcription, recombination and repair and therefore the consequences of impaired DNA-Protein Crosslink Repair (DPCR) are severe. Considering their frequent occurrence and detrimental effect on all DNA transactions, it is not surprising that DPCs are implicated in aging, cardiovascular diseases, neurodegeneration and cancer. On a cellular level, aberrant DPC repair leads to the formation of DSBs, genomic instability and/or cell death, while on the organismal level impaired DPCR was so far shown to cause premature aging phenotypes and cancer.

The mechanism of DNA-Protein Crosslink Repair (DPCR) is still largely unknown. The reason is in part due to the misconception in the field that DPCs are repaired by canonical DNA damage repair pathways, nucleotide excision repair (NER) and homologous recombination (HR). However, we and others have recently shown that DPC repair is a specialised DNA damage repair pathway which relies on the proteolytic digestion of crosslinked proteins. The central players in the pathway are the metalloproteases Wss1 in yeast and SPRTN (syn. DVC1) in mammals which initiate DPCR by the proteolytic cleavage of crosslinked protein, followed by the removal of the protein remnant from DNA backbone via different downstream factors. However, the discovery of the SPRTN protease only scratches the surface of this pathway and the vast majority of questions including the identity of other DPCR factors still remain to be answered. Indeed, all known DNA repair pathways involve a complex machinery consisting of numerous proteins. For example, both homologous recombination-mediated DSB repair and Nucleotide excision repair (NER) each involve >30 proteins.

Other factors with a role in DNA-Protein Crosslink Repair

Specific, enzymatic type of DPCs, Topoisomerase 1 and 2 cleavage complexes (TOP1ccs and TOP2ccs) are in part repaired by tyrosyl phosphodiesterases1 (TDP1) and 2 (TDP2). These enzymes require upstream proteolysis of DPCs, which reduces the size of crosslinked topoisomerases. TDPs then remove the protein remnant from the DNA backbone by incising the DNA around the DPC remnant with their esterase activity. However,in vitro studies suggest that TDPs might not only remove TOPccs, but also other DPC types. Research into these areas has been hindered by the lack of adequate models and we aim to answer the open question with an in vivo model using zebrafish transgenic strains.

Small DPCs(below 8-16 kDa) can be repaired by Nucleotide excision repair pathway (NER). However, direct removal of DPCs via NER machinery has only been shown in vitro and in cell lines. In vivo studies on the organismal level which will ultimately prove under which conditions NER is involved in DPC repair are currently lacking.

The role of homologous recombination (HR) in the DPC repair is still unclear because it is difficult to distinguish the role of HR in DPC removal from the canonical role of HR in DSB repair given that unrepaired DPCs eventually cause DSBs. Recently it was shown that a nucleaseMRE11, known primarily as a component of the MRN complex, a central part of the HR pathway, can remove TOP2ccs and artificially crosslinked streptavidin protein via the endonucleolytic cleavage of DNA near the protein crosslink. It is still unclear whether this action of MRE11 is HR-dependent  or HR-independent. In any case, MRE11 is a novel player in DPC repair and we will investigate its connection to SPRTN-mediated DPC proteolysis and its overall significance and specificity in the DPC removal in vivo.

Zebrafish as a research model

Zebrafish is a well-established vertebrate model in developmental biology, toxicology and biomedicine. It offers a uniquely elegant toolbox to investigate the orchestration of DPC repair in vivo due to the ease of genetic manipulation and very fast developmental cycle. Additional advantages of the model include easy and automated fish maintenance, established methods for forward and reverse genetic studies and high quality of sequenced genome. Indeed, zebrafish is the only vertebrate whose genome is sequenced with similar quality to those of human and mouse. Additionally, given the high degree of evolutionary conservation between zebrafish and mammals, especially in respect to DNA damage related genes, utilizing the zebrafish model to understand the mechanisms of DNA repair pathways is an emerging field with proven benefits.