Nuclear microprobe is a device that uses a system of quadrupole lenses (depending on the application it could be doublet, triplet or quintuplet) to focus an ion beam to the micrometer size.

Ion beam is scanned over the sample surface (typically up to 1x1 mm2). The available beams are protons (0.4 to 8 MeV) and most of other heavier ions up to ME/q2 ratio of 15 MeV. Typical currents used for most of the ion beam analysis (IBA) techniques, such as PIXE, RBS, NRA and iono-luminescence are between 1 and 1000 pA, while for the low current techniques (STIM and IBIC ) currents are reduced to fA range. The beam spot size depends on ion species being focussed, their energy and current. For the most favourable conditions the beam spot size can be as low as 250 nm. 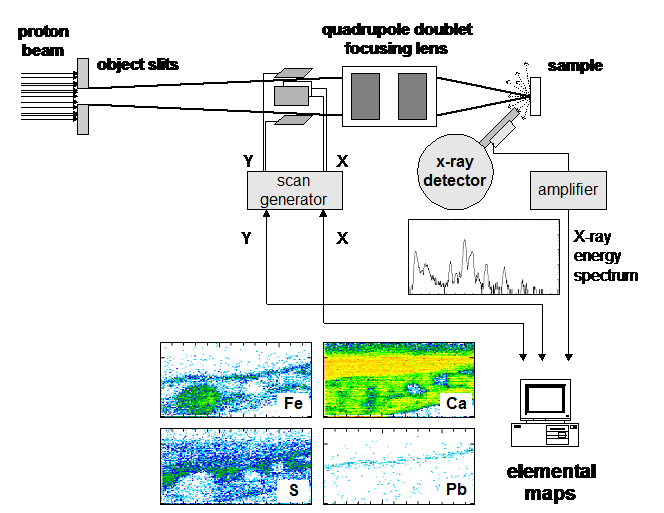 When charged particle (e.g. proton) moves through a material, it loses energy primarily by exciting electrons in the atoms that it passes by. Electrons in the inner shells of the atom (predominantly the K and L shells) are given enough energy to cause them to be ejected. Electrons from outer shells are filling these vacancies, which is accompanied by the emission of X-rays. The energies of these X-rays are characteristic of the element and therefore, if appropriate detector is being used, recorded spectra can be used to identify elemental composition of sample being exposed by the beam.  PIXE is relatively simple and multielemental analytical technique that can be used to identify and quantify elements ranging from Na to U. Due to the high signal to background ratio, PIXE is also nondestructive technique and very sensitive and for a wide range of measured elements with detection limits close to 1 ppm (part-per-million). 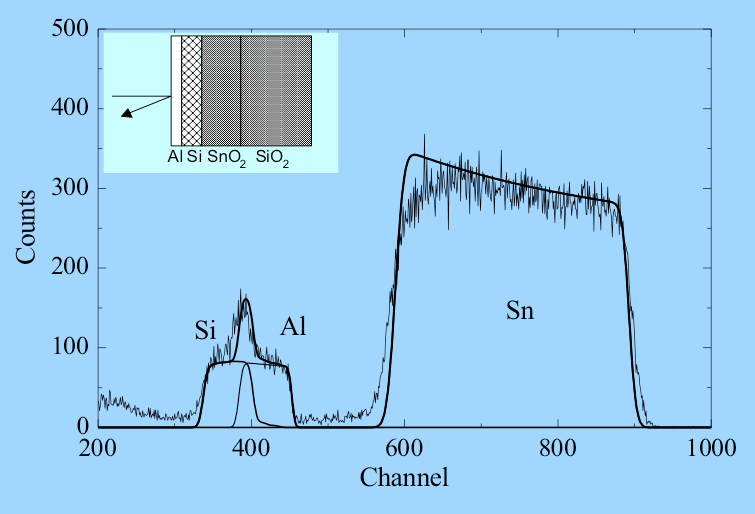 By measuring the energy and intensity of backscattered beam of high energy ions (typically protons and alpha particles), impinging on a sample it is possible to determine the composition and depth profile of elements at the sample surface and below. Although technique can be used to quantify major sample elements (except hydrogen) and as such is complementary to PIXE, RBS is particularly useful for the depth profiling. The best results are obtained for the depth profiling of heavy elements in light substrates.

When a fast ion (typically protons) approaches the nucleus of a target atom, the Coulomb force usually repels it. However, when the incident particle has enough energy to overcome the repulsive Coulomb force a charged particle then penetrates through the electrostatic barrier into the nucleus, resulting in interactions with the nuclear forces.  If nuclear reaction occurs, it can result in emission of particles and/or gamma rays. Detection of particles (usually done by Si particle detector) – is a basis of NRA, while detection of gamma rays (typically by large volume Ge detectors) is a basis of PIGE. Both techniques can run in conjunction with PIXE and RBS and are mostly used to quantify concentrations of low Z elements such as: Li, Be, B, C, N, O, F, Na, Mg and Al.

Ions penetrating the material undergo numerous interactions with the target electrons and nuclei. They lose their energy and are being slowed down. The ion energy loss depends on the ion velocity and its charge (not on the ion mass) as well as on target material. By measuring the energy of transmitted ion at some particular sample position, its structure and density variations within the sample can be studied. By using different ion species and their respective energies, wide range of sample thicknesses can be studied.

Fast moving ions interact with the electrons of atoms in the material creating numerous ionizations along their trajectories. If ions are being stopped in semiconductor device, created charge pairs may drift in the built in electric field (e.g. pn junction) or in field that is externally. This will induce a measurable charge signal at the electrodes. By correlating ion position (using nuclear microprobe system) with signal height, images of charge collection properties are obtained. In addition to IBIC imaging, technique is a suitable for quantifying the transport parameters of the charge carriers in materials being tested. By possibility to inject different ion species with different respective energies, IBIC can also probe electronic transport at different sample depths. 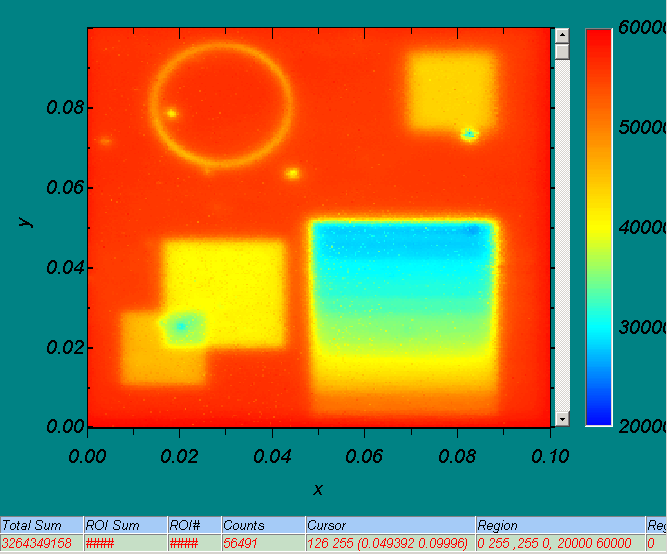 In addition to characterisation, focussed MeV ion beams could be also used for materials modification. Proton microbeam could be used for direct writing lithography (e.g. resists as PMMA), or to induce homogeneous regions of radiation damage with reliable control of ion fluence. Heavier ions could be implanted to certain depth in the sample. A wide span of flunces could be used, from single ions (e.g. luminescence centres) up to extremely high fluence densities (e.g. induction of graphitic lines in diamond by C-ion implantation).