Scattering chamber for routine PIXE/RBS analysis is installed at -45 degree line of the Tandteron accelerator. It can accept up to 16 samples (size between 10 and 25 mm) that are exposed to 2 MeV proton beam of circular shape (3, 5 or 8 mm)

When charged particle (e.g. proton) moves through a material, it loses energy primarily by exciting electrons in the atoms that it passes by. Electrons in the inner shells of the atom (predominantly the K and L shells) are given enough energy to cause them to be ejected. Electrons from outer shells are filling these vacancies, which is accompanied by the emission of X-rays. The energies of these X-rays are characteristic of the element and therefore, if appropriate detector is being used, recorded spectra can be used to identify elemental composition of sample being exposed by the beam.  PIXE is relatively simple and multielemental analytical technique that can be used to identify and quantify elements ranging from Na to U. Due to the high signal to background ratio, PIXE is also nondestructive technique and very sensitive and for a wide range of measured elements with detection limits close to 1 ppm (part-per-million). 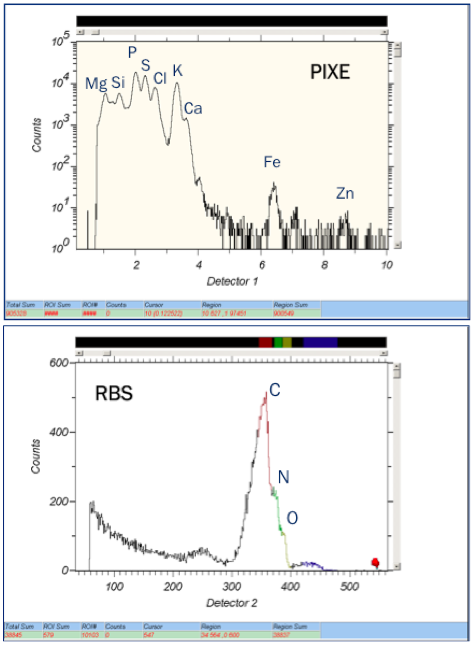 There are two PIXE detectors installed in the chamber. SDD detector is used for the analysis of light element (Na and above). Si(Li) detector having large solid angle and Mylar filter is optimized for the heavy elements (K, Ca and above). Quantification is based on GUPIX software package, using integrated current or RBS normalization.

By measuring the energy and intensity of backscattered beam of high energy ions (typically protons), impinging on a sample it is possible to determine the composition and depth profile of elements at the sample surface and below. Technique is in particular powerful for the depth profiling of heavy elements in light substrates.
When RBS is done in combination with PIXE (see spectrum), it can be used to determine light element concentrations, which is not possible by PIXE. RBS spectra quantification is done by SIMNRA software.