"A Cold Approach to a Hot Problem" by Professor Helmut Schwarz 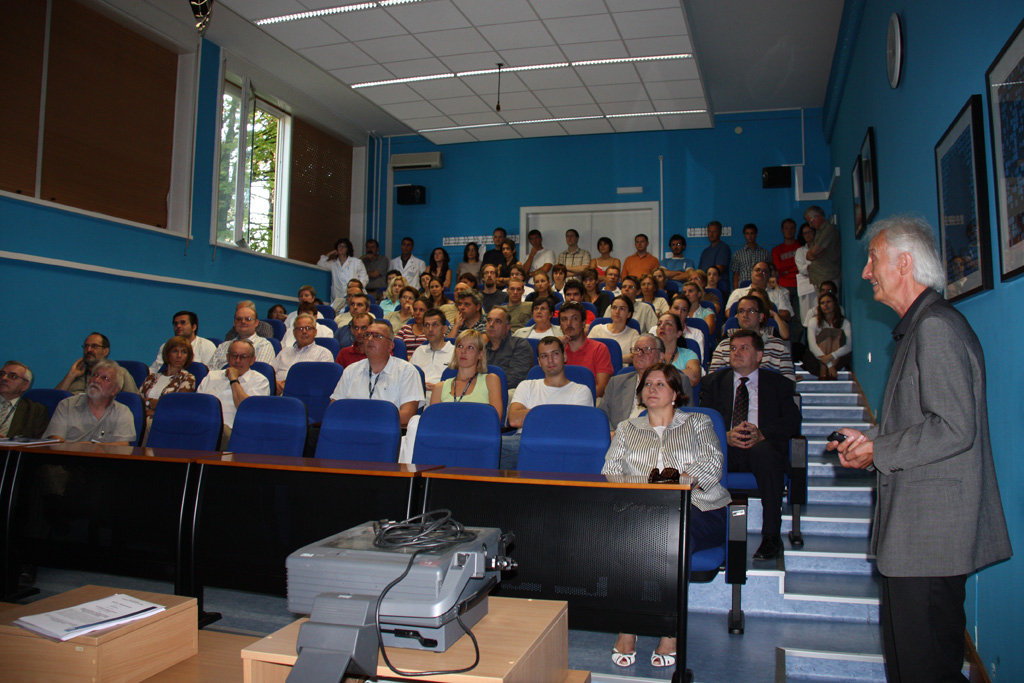 Ruđer Bošković Institute today welcomed the President of the Alexander von Humboldt Foundation Prof. Dr. Drs. h. c. Helmut Schwarz, professor of organic chemistry at Berlin University of Technology (TU) and a member of the RBI International Scientific Council who gave a lecture on: Ligand and Cluster-size Effects in Metal-mediated Activation of Methane: A Cold Approach to a Hot Problem. The lecture by professor Schwarz is the second of the Distinguished scientists at RBI series, organized under auspice of RBI Director.

Professor Helmut Schwarz is one the leading international researchers in the field of molecular chemistry. He started his scientific career at the Berlin TU where he was appointed to a professorship for the theory and practice of mass spectroscopy in 1978 and since 1983 he has been working as a professor for Organic Chemistry there. He has also worked as a visiting professor at a number of research institutions abroad, including Cambridge, Jerusalem and Haifa, Lausanne, Canberra, Innsbruck as well as Paris and Strasbourg. From 2001 to 2007, he was Vice President of the German Research Foundation (DFG) and was appointed President of the Alexander von Humboldt Foundation in January 2008.

For his outstanding scientific work in basic research professor Schwarz has been granted numerous awards, amongst others, the Otto Bayer Award for Chemistry (1989), the Alexander von Humboldt Foundation's Max Planck Research Award (1991), the International Mass Spectrometry Society's J.J. Thomson Medal in Gold (1994), the German Chemical Society's Liebig Medal (1998), the ETH Zürich's Prelog Medal in Gold (2000), the American Chemical Society's F. H. Field und J. L. Franklin Award (2001), the Otto Hahn Award for Chemistry and Physics (2003) and the Erwin Schrödinger Award (2008). The Israel Institute of Technology TECHNION in Haifa (Israel), the Hebrew University of Jerusalem (Israel) and the University of Innsbruck (Austria) have all awarded him honorary doctorates. In addition to his research work, Helmut Schwarz is a busy editor and member of the editorial board of various scientific journals as well as having made a name for himself as a science policy expert.

In the international scientific community, professor Schwarz is known not only as an exceptional scientist and expert on science policy, but as a brilliant lecturer with a great enthusiasm and excitement about science. This excitement is always present in his lectures and his audiences get caught up in it. Today at the crowded RBI lecture hall the audience had such a favourable opportunity to share this unique experience with him. Today's lecture reminded us why professor Schwarz is known as a very sought after lecturer all over the world. Professor Schwarz once again confirmed his status of a true scientific virtuoso constantly provoking and enticing his audience to continue their pursuit for some new incredible understandings of science.

“Most basic research is not planned. It is that people are simply interested in new discoveries. They are driven in a passionate way by curiosity and desire to understand. This is exactly why we are here today. We just wanted to understand.” concluded professor Schwarz.