A Lightning Inferno at the Event Horizon 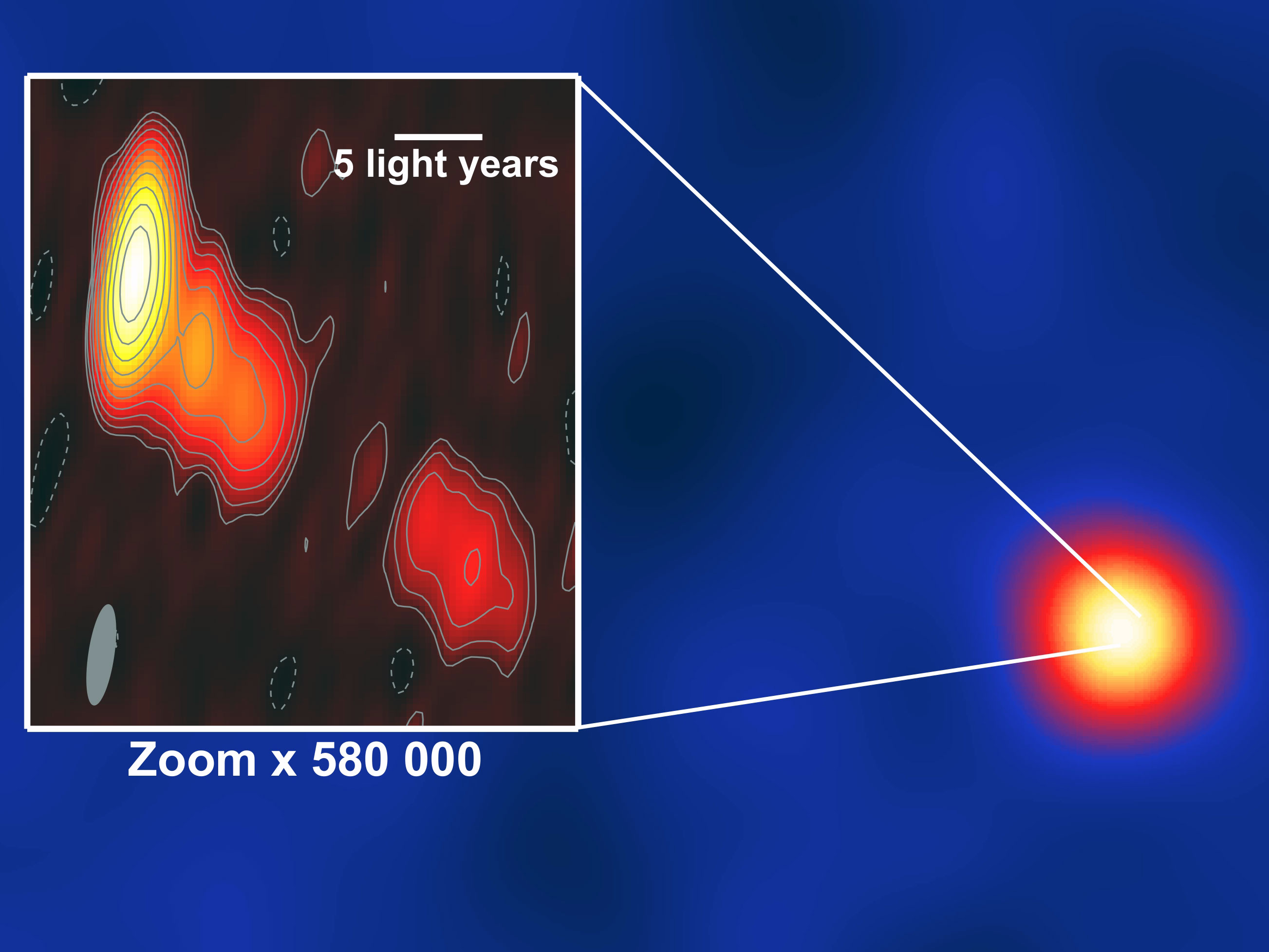 An international team of researchers of the MAGIC Collaboration (Major Atmospheric Gamma-ray Imaging Cherenkov) came to new findings while observing the galaxy IC 310. Specifically, the researchers were able to measure the fastest temporal change of the radiation in relativistic jets of one supermassive black hole, which indicates that the area where gamma rays are produced is much smaller than previously thought.

These exceptional results, obtained by the collaborators using the MAGIC and EVN telescopes, were published today in the prestigious international journal Science.

In a paper to appear in Science, an international team of researchers reports the observation of a powerful flare of very high energy gamma-radiation from the galaxy IC 310 using the MAGIC twin 17 meter telescopes on the Canary Island of La Palma. Ancillary observations using the European VLBI network of radio telescopes showed a remarkably straight plasma jet emerging from the vicinity of a supermassive black hole at the center of the galaxy. The flickering of the gamma-ray flare on time scales of less than five minutes shows that it originated from a region smaller than the event horizon of the black hole.

The finding supports the idea that such a lightning Inferno was due to particles accelerated in an extremely narrow region located near the event horizon of the black hole and permeated by strong electric fields. Such structures are expected to form near rapidly-spinning black holes that power radio jets by their rotational energy loss.

Supermassive black holes, with masses ranging from a million up to few billion times the mass of the Sun, are thought to reside in the center of galaxies. This appears to be the case for IC 310, a galaxy belonging to the Perseus cluster of galaxies at a distance of about 260 million light-years. It is famous for an extended radio jet emerging from its center. For decades, the origin of this jet has been a puzzle. It emits a power that corresponds to the radiation output from ten billion stars and emerges from an extremely compact central part of the galaxy. Employing the EVN network of radio antennas, high-resolution images of the jet revealed a very straight structure emerging from a compact core smaller than a light year.

The recent detection of variable gamma ray emission with the MAGIC telescopes has renewed the interest in this enigmatic source. The angular resolution of astronomical telescopes is usually not sufficient to resolve the direct vicinity of black holes, but the EVN and MAGIC team-up has now yielded an unprecedented view of this violent environment. Information about the structure of the source is encoded in its variability. The shorter the variability time scale, the smaller the size scales that can be probed. “A source region must be smaller than the distance that light can travel during the variability time scale.” explains Julian Sitarek, researcher at IFAE in Barcelona (Spain) and, Co-Investigator of this research. Since the shortest variability time scales arise at the highest photon energies, gamma-ray observations hold the clue to uncover the size of the jet formation region.

In a new campaign including observations with the MAGIC telescopes, the gamma-ray emission was found to vary on time scales of less than five minutes.

The Principal Investigator, Dorit Eisenacher Glawion, PhD student at University of Würzburg (Germany), says: “Since the event horizon of the supermassive black hole in IC 310 is known to be about three times as large as the Sun-Earth distance, finding variable gamma-ray emission at only one quarter of this distance was a complete surprise to us.”

Supermassive black holes flow are expected to expel plasma jets at the expense of their rotational energy. They induce currents in the surrounding accretion flow associated with large-scale magnetic fields, collimating and accelerating charged particles. And indeed, the EVN network of radio antennas, high-resolution images revealed a very straight jet emerging from a compact core smaller than a light year.

“We can directly image these small scales thanks to the technique of Very Long Baseline Interferometry employed by the EVN.” explains Robert Schulz, PhD student at the Erlangen-Würzburg research cluster. According to the current picture, the observed gamma rays arise at shocks traveling down the jet. However, the minimum time scale for the emission originating at shocks is given by the light crossing time across the event horizon which limits the radius of the jet from below. Now, the MAGIC observations tell a different story.

If the plasma around the supermassive black hole is very rarified, the jets should develop regions near the rotational pole where the density is too low for charges to shortcut the electric fields arising due to the rotation of the magnetic field. These intensely electrified regions resemble the vacuum gaps in pulsar magnetospheres which are known to accelerate particles to very high energies, exceeding more than ten thousand times the rest mass equivalent energy of the elementary constituents of matter, protons and neutrons, and tapping a significant fraction of the total outflow energy. Thus, the observations of IC 310 may be the first hint providing direct clues on the enigmatic jet formation process near black holes.

A Lightning Inferno at the Event Horizon