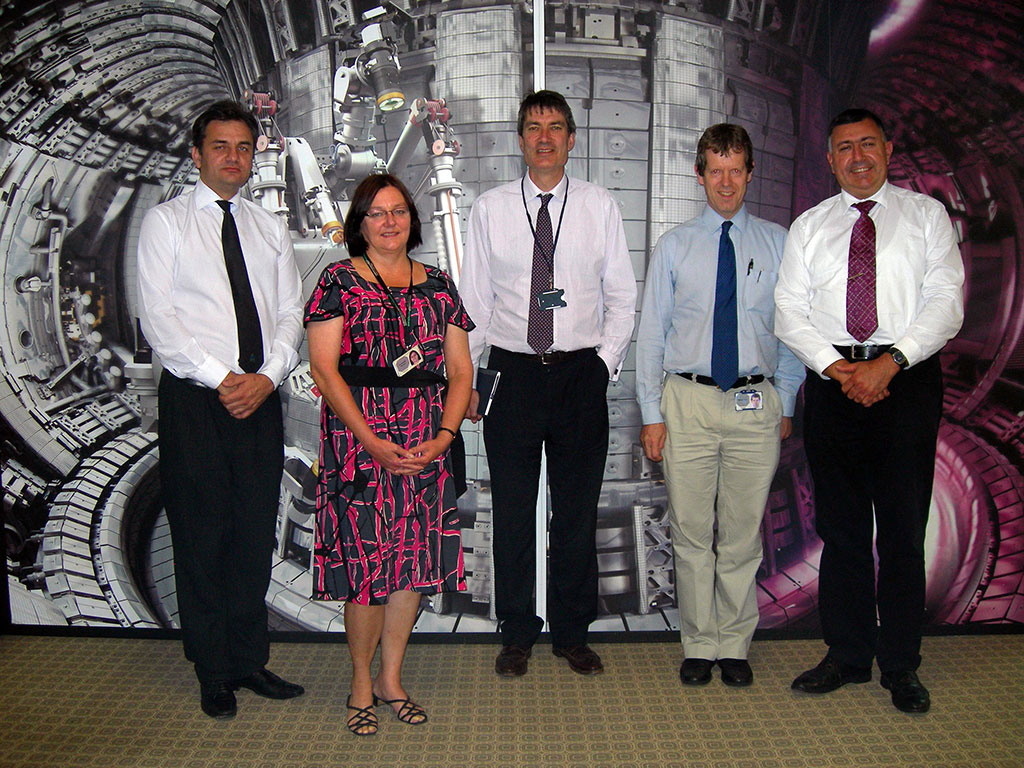 The Croatian Fusion Research Unit (CRU) has joined UK Fusion Association as ‘External Research Unit’ by signing the cooperation agreement in Culham Centre for Fusion Energy, UK. This is of immense significance for the inclusion of Croatian scientists into research development and application of thermonuclear fusion carried out by European Union and the European Atomic Energy Community (Euratom), the EU and Euratom, as well as their participation in ITER project, the world’s most advanced experimental fusion reactor, aimed at obtaining a more cost-effective, cleaner, safer and practically inexhaustible energy source.

It is estimated that in two hundred years humanity will deplete most of its fossil fuel reserves. Many physicists believe that the energy obtained through the process of thermonuclear fusion might present a cheaper and fully environment-friendly alternative to chief contemporary energy sources – fossil fuel and fission nuclear power plants, devised through the ITER (International Thermonuclear Experimental Reactor) project with participation of the EU, USA, China, Russia, India, Japan and Korea. This project is the biggest scientific experiment of our times, valued at € 13 billion, with the EU covering one half of all costs.

The goal of ITER is to prove the feasibility of producing fusion energy devices on an industrial scale, i.e. to achieve the so-called self-sustained burning plasma, which heats itself using the energy from fusion reactions, thus imitating the way in which the Sun produces energy. To clarify, thermonuclear fusion is the process of joining light hydrogen isotope nuclei into a heavier helium nucleus with the release of thermal energy. In order to achieve fusion and create burning plasma, ITER aims to accomplish the temperature as high as 150 million OC, i.e. ten times greater than the temperature in the Sun’s core, while the volume of gas caught by the fusion will be eight times greater than in the largest global fusion devices of today. ITER should be able to produce fusion power of 500 MW, as the first step toward a commercial fusion power plant DEMO of 2.5 GW.

The EU ‘Fusion Roadmap’ predicts the completion of ITER by 2022, with the creation of self-sustaining burning plasma by 2027, while the first fusion power plant DEMO should be constructed by 2035. The realisation deadlines of the fusion power plant have been moved to a prior date, based on the latest scientific insights of research groups in EU member states. Since the reform of the Euratom Fusion Programme aimed at accelerated realization of the EU Fusion Roadmap is to be conducted in the second half of 2013, i.e. by January 2014 at the latest, it is impossible to ratify all the required fusion-related international agreements with the Republic of Croatia in all the EU member states in such a short time, which is why a temporary solution has been found in CRU joining the UK Fusion Association as ‘External Research Unit’.

With the purpose of signing the Cooperation Agreement between CRU and the UK Fusion Association in the Culham Centre for Fusion Energy (CCFE), the Ruđer Bošković Institute Director General Tome Antičić, PhD, and CRU coordinator Tonči Tadić, PhD, have met with Steven Cowley,PhD, the president of the UK Fusion Association, Elizabeth Surrey,PhD, the CCFE’s Technology Programme Leader, and Martin Cox,PhD, the CCFE’s Director of Strategy and Technology. This team has also discussed the possibilities of more rapid inclusion of Croatian scientists from CRU in CCFE projects, as well as Euratom research programs, with the assistance of their British counterparts.

“Participation in Euroatom operations and its Fusion Programme are binding for all EU member states. The choice of CCFE and the United Kingdom as our partners in this transitional stage of the EU Fusion Programme is highly logical. Apart from the significant experience of our colleagues from the UK, one should also bear in mind the fact that the CCFE is the headquarters of the umbrella organisation EFDA (European Fusion Development Agreement) and the home of the largest fusion device in the world – JET. Fusion holds a very important place in the Horizon 2020 programme, as well as the EU Energy Strategy for the period until 2050. Thus, Croatia’s participation in the EU Fusion Programme is an essential prerequisite for including Croatian companies in the construction of the European component of the International Thermonuclear Experimental Reactor (ITER) and an opportunity to grab a slice of the cake worth €6.5 billion” - said Tadić, CRU coordinator.

For over 60 years thermonuclear fusion has been using the so-call tokamak devices, a Russian acronym for ‘toroidal chamber with magnetic coils’. Tokamak confines the gas heated to a very high temperature and brought into the state of plasma, keeping it away from the machine walls, compressing and controlling it using a magnetic field.
The CRU research teams wish to participate in Fusion Roadmap strategic projects and tasks, such as estimates for keeping the fusion fuel within the tokamak machine walls, determination of dust particle origin in the tokamak, the influence of fast neurons on materials and electronics, the development of superconductive magnets, laser spectroscopy of plasma, heating of the gas using radio waves and fast ions, radiation protection and nuclear energy of the fusion power plant, tritium control in the power plant environment and numerical simulations of electromagnetic fields in the tokamak.