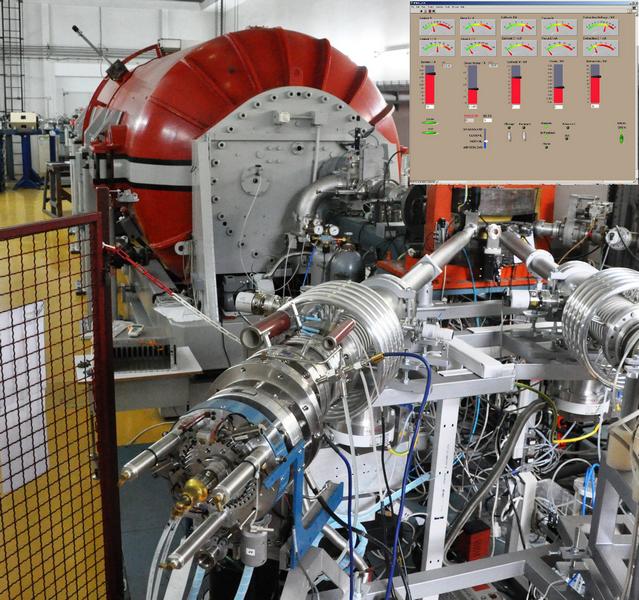 A new sputtering ion source worth 200000€ has been commissioned at the RBI accelerator facility. This ion source will serve as injector to the 6 MV Tandem Van de Graaff accelerator and will contribute to the better transmission of ion beams through the system as well as enhance the number of ion species that will be possible to accelerate in the facility.

With increased currents of light ions important for research in nuclear physics, this extension of the Tandem Van de Graaff accelerator capabilities will also enlarge the possibilities of ion beam applications using microscopic characterisation of materials using ion beam analysis (IBA) techniques. Furthermore, due to the extremely high energy transfer from fast heavy ions to materials, focused or single fast ions can be used as a tool for nanostructuring.

In contrast to the old in house produced sputtering ion source, the new SNICS 40 ion source (made by National Electrostatic Corporation, USA) delivers significantly higher ion currents. With the possibility of changing cathodes without disturbing the vacuum system, the SNICS 40 will enable fast change of ion type injected into the accelerator. Ions that are particular efficiently injected with currents higher than 1 microampers are H, Li, B, C, O, F, Si, P, S, F, Cl, Cu, Br, I, Au, etc. The first experiments using the new ion source demonstrated stable source operation and improved reliability of the whole facility which is important for all existing and future accelerator users.

The major portion of source funding has been secured through an IAEA technical cooperation project and a European Union FP6 project RBI-AF. Source assembly, electrical installation, construction of some mechanical components, as well as computer control programming and hardware have been performed by staff in the Laboratory for ion beam interactions of the Experimental physics division. Several important components such as flexible vacuum tubes, high voltage transformers, high voltage insulators, and source support have been supplied by several small domestic companies.