Seventh Lecture in the Embassy Series Sponsored by the RBI Held

Yesterday, as part of the  Embassy Series Sponsored by the Ruđer Bošković Institute, the Ambassador of China, H.E.  Shen Zhifei, delivered a lecture entitled Scientific and Technological Innovation Is an Inevitable Way to Sustainable Development, in which he presented the accomplishments and goals of China in the areas of the economy, science and technology. The lecture was attended by many scientists and distinguished guests, among whom were the Head of the Delegation of the European Union to the Republic of Croatia, Ambassador Paul Vandoren. 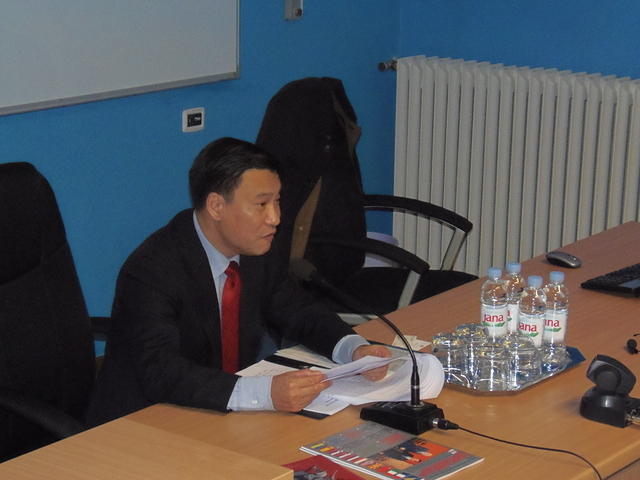 During the introductory part of the lecture, Ambassador Zhifei noted the importance of the Embassy Series, as well as the great Croatian scientist Nikola Tesla and the inventor Slavoljub Penkala, who cintributed to world science. “Scientific and technological progress are the basis for the development of human civilization, and through 5,000 years of scientific and technological history and four great inventions—paper, printing, the compass and gunpowder, China has made a significant contribution, said Ambassador Zhifei.

China today, economically speaking, is the largest developing country and the world's second largest economy, behind the United States. The Chinese GDP in the past five years has grown at an average rate of 11%, and the total amount is approximately 6 trillion American dollars (2010). In 2010, China invested over 100 billion dollars (1.76% of the GDP) in technology, and by 2020 it plans to increase this to 2.5% of the GDP. Today, China has assumed a leading world role in research in the field of nanotechnology.During the period from 1998 to 2008, Chinese scientists have published approximately 112,000 scientific papers, second only to the United States.

As challenges that China faces in building an innovative nation, Ambassador Zhifei emphasized high reliance on foreign technology. China imports 50% of its technology, while, for example, the United States and Japan only 5%. Furthermore, the recognizability of local products is poor, due to which they do not sell well. China currently has 60 million highly educated professionals but it still lacks highly skilled workforce. China insufficiently accepts and uses foreign technology, and although it is a big player in production, it is at the end of the world industrial chain. Production is still focused in low-end products that do not earn much and on high-tech products that are produced in China, most of the profits being taken by international corporations. As an example, Ambassador Zhifei noted that in China it is necessary to produce 800 million T-shifts in order to purchase one Airbus.

Today, China consumes 46% of world steel production, 16% the energy and 50% of the cement, and generates only 1% of the global GDP. From this, it is evident that Chinese development excessively relies on energy, which creates environmental pollution, said Ambassador Zhifei. In the future, reliance on science and technology is the only way for sustainable development, and the speed in which basic research leads to applied research provides an opportunity for developing countries to catch up and overtake developed countries, said Ambassador Zhifei.

At the end of the lecture, Ambassador Zhifel spoke about the relationship between the EU and China and the relationship between Croatia and China. Since 1975, the EU and China have accelerated tbe development of relations and in 1998 the Protocol of Scientific and Technological Cooperation was signed. The relations between the EU and China have today reached the level of strategic partnership, and stable relations are in the interest of both parties. China imports the most technology from the EU, and large numbers of European products are available on Chinese markets. The total trade between China and the countries of the EU is approximately 400 billion EUR and the EU is China's largest trading partner.

Ambassador Zhifei mentioned the joint venture between the Croatian company and its Chinese company TBEA Shenyang Transformer Group, and hopes that Croatia's accession to the EU will make cooperation and trade between Croatia and China even better.

The Embassy Series Sponsored by the RBI was initiated with the purpose of exchanging ideas and improving Croatian cooperation with countries for which science and education are the foundations for the development of high technologies, as a driving force for the economic advancement of modern societies.