The Ambassador of the United States of America to the Republic of Croatia, His Excellency James B. Foley, delivered a lecture entitled "U.S. Science and Innovation Policies—from Research to Prosperity” on Wednesday, March 7, 2012, at the Ruđer Bošković Institute. 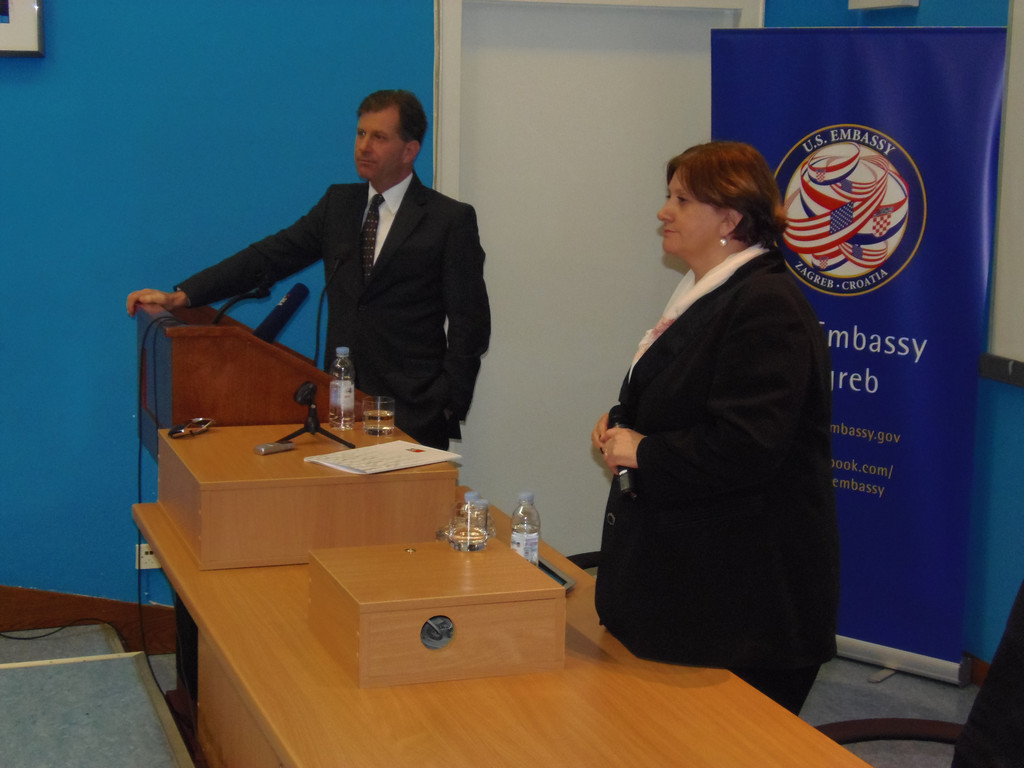 The Ambassador emphasized that the United States, despite strong austerity measures, increased allocations this year for research in the belief that investment in innovation and development is the foundation of economic recovery and that science, education, research and innovation are central to the American economic recovery program, as confirmed by actual figures.

Several weeks ago, U.S. President Barack Obama presented the 2013 budget, which, although generally frugal, provides 140 billion dollars for research and development, an increase of 1.4 percent in comparison to the previous year. Thus, continued progress has been made toward the goal that Obama announced several years ago: for research and development allocations in all sectors of the United States—private, academic and public—to reach approximately 3 percent of the GDP, as they were during the Cold War, when incentive came from competition and the space race. In 2010, investment in science in the United States amounted to 2.7 percent of the GDP. The share of the private sector in this was over 50 percent. The most successful American companies, such as Microsoft, understand the importance of investment in science. The United States stimulates such investment through tax incentives. That investment in science and technology yields concrete economic benefits with time defines the experience of the United States from its beginnings. In this sense, the United States is not unique in the world, although according to the percentage of the GDP allocated for science and research, it ranks among the world leaders, together with counties that set aside even more than it does, such as Japan, Korea and Israel.

Ambassador Foley said that the role of the state is to ensure balance by plugging “holes,” i.e., investment in areas where the private sector may not invest enough, such as, for example, basic research and education. This also applies to introducing innovations as a response to the challenges of the 21st century, such as climate change or the quest for new energy sources. In this strategy, a key role is played by the U.S. National Science Foundation (NSF), which attempts to create synergy between the private and public sectors as the very essence of American scientific policy. Thus, the NSF funds approximately 20 percent of all basic research with government support at colleges and universities. In areas such as mathematics, computer sciences, economics and social sciences, the NSF is the main source of government support in the USA. The NSF also ensures that the results of state-supported research are publically available. It makes it possible for the private sector to compete for the rights to these results, while at the same time protecting the intellectual rights of scientists. In this process, said Ambassador Foley, it is not only important to publish research results but also to bridge the gap between science and industry. The USA attempts to maintain the connection between innovation and commercialization. For this purpose, the United States has launched a new program, American Innovations Corporation, which through public-private partnership attempts to accelerate the flow of results from the laboratory to the market.

A good example of this is Google, which would not exist without a combination of public and private resources. On the other hand, errors in this process tend to be expensive, such as when Xerox developed the first personal computer, the Altair, in 1973. It used a system that included a mouse, which today is an integral part of all computers. This was a key discovery. However, Xerox failed to recognize it and in 1977 withdrew from the project. The story did not stop here. Many leading Xerox scientists left the company, one of whom became a key leader in Microsoft Windows and used ideas that Xerox had developed. In 1979, young Steve Jobs of the Apple team of engineers visited Xerox on two occasions. “He obviously recorded particulars in detail that he observed because Apple came out with the computer Lisa by May 1983, and then the groundbreaking Macintosh, which used a graphic interface developed at Xerox. Thus, Xerox could have been in the vanguard of computer development but missed the chance. The United States is fortunate in this respect because Xerox innovations were commercialized within the country. Today, in the global economy, we would not necessarily have such good fortune. Today, these scientists could easily end up in India, Brazil or China,” explained the Ambassador.

During the lecture, Ambassador Foley emphasized that American scientific strategy throughout history has not been based solely on the development of domestic talent but also on attracting the best from all over the world to come to the United States. Immigration has been a key driver of American innovation and economic success. In the past, persons such as Albert Einstein were fleeing persecution. Although the U.S. is still open for immigration, greater emphasis is placed on cooperation. In this sense, the connection between the scientific and academic communities of the United States and Croatia is increasingly strong. The Ambassador said that he would like to see this connection continue to deepen. “I am impressed by meetings with many Croatian scientists who have gone to work in the United States. The quality of Croatian scientists is at the global level,” said the Ambassador.

“Croatia will soon enter the European Union. However, it currently invests less in science than the European average. According to Eurostat, in 2010 Croatia allocated 0.73 of its GDP for research and development. Obviously, there is a great difference between Croatia and the United States in the participation by the private sector in such financing. In Croatia, there should be a stronger connection between the economy and science,” concluded Ambassador Foley.

The lecture by Ambassador Foley is the ninth in the Embassy Series Sponsored by the RBI, initiated for the purpose of exchanging ideas and improving cooperation between Croatia and other counties for which science and education are the foundations of the development of high technologies, as a driving force for the economic advancement of modern societies.