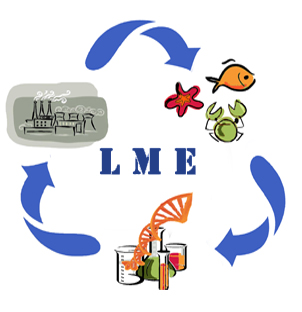 Anthropogenic pollution is characterised by the dispersal of contaminants in all parts of biosphere so there are no ecosystems free from traces of human activity, because even areas unknown to human habitation are contaminated by pollutants carried by the movements of air masses or by marine currents. For the purpose of marine ecosystem protection studies of toxic impact of contaminants on marine organisms in situ and under the controlled laboratory conditions are essential. Previous studies indicated that the major ecotoxic impact on marine organisms include short term effect of natural and anthropogenic factors on macromolecular and cellular level. Due to the insufficient understanding of mechanisms involved in contaminants effects it is necessary to establish a) molecular and cellular mechanisms that allow detection of toxic impact on marine organisms and b) qualitative and quantitative determination of contaminants effect and other ecological factors in selected marine organisms. Therefore, the aim of the proposed project is to analyse cells (hemocytes, coelomocytes, leukocytes) involved in immunological responses to environmental conditions (cell cycle alterations, phagocitosis, apoptosis) and macromolecules such as proteins («protein fingerprinting» and role of DNase in cytotoxic effect). Additionally, it is planned to get an insight in relationship between environmental condition and molecular biodiversity of certain marine species. Due to species specific response to environmental conditions investigations will include organisms from different habitats such as sea bottom and intertidal zone. It is expected that the chosen parameters will contribute to understanding of mechanisms involved in contaminant toxic effect as well as be a good indicators of environmental conditions and impact on marine organisms. Investigation results will be published in international scientific journals and presented at international scientific conferences. Besides contribution to understanding of biological response in marine organisms to ecosystem conditions, results of proposed investigation could be applied in determination of health of marine ecosystem as a major source of food and other different resources necessary for human population.