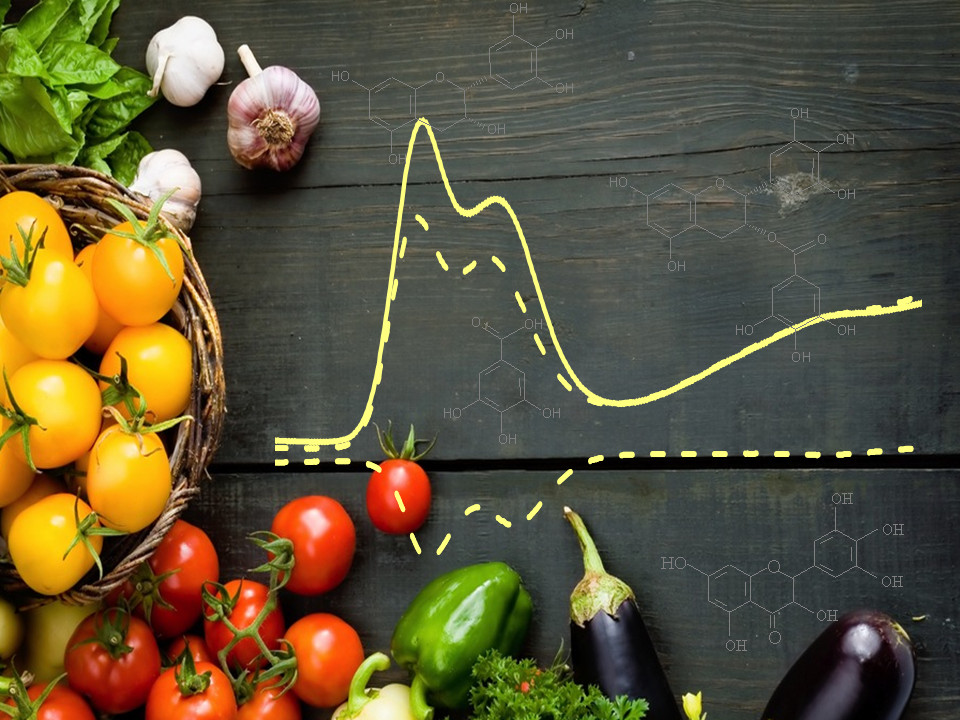 Clinical and epidemiological studies have established an inverse correlation between the intake of fruits and vegetables and the occurrence of diseases such as inflammation, cardiovascular diseases, cancer and other related disorders. Dietary or natural antioxidants are believed to be effective compounds in the prevention of these oxidative stress related diseases. Protective effects of antioxidants are mainly attributed to their ability to scavenge reactive free radical species. Oxidants are formed as a normal product of aerobic metabolism, while antioxidants defense involves both enzymatic and non-enzymatic strategies. A quasi-steady state is maintained by an intricate pattern of antioxidants [1]. If the products of oxidation are free radicals, which start chain reaction, antioxidants remove free radicals and terminate these chain reactions. Antioxidants are either hydrophilic, or hydophobic. The first group acts in cytosol, and the second one in cell membranes. Some of water soluble antioxidants are ascorbic acid, glutathione, lipoic acid and uric acid, while carotenes, o-tocopherol and ubiquinol are soluble in lipids. A major function of vitamin E is to maintain the integrity of long-chain polyunsaturated fatty acids in the membranes of cells by scavenging peroxyl radicals [2]. Furthermore, cells are protected against oxidative stress by antioxidant enzymes, such as superoxide dismutases, catalases and peroxiredoxins [3]. Antioxidants are found in fruits and vegetables (e.g. vitamin C and carotenoids), eggs, meat and oils (e.g. vitamin E and lutein) and tea, coffee, soy and wine (e.g. polyphenols, flavonoids and catechins) [4]. Thus, the determination of free radicals and antioxidants has been widely investigated in the food technology and human health fields. Techniques traditionally used in investigations of antioxidant activity of compounds or natural and biological samples are spectrophotometry, fluorescence and liquid chromatography. However, these techniques are showing numerous disadvantages, and are being replaced by other innovating technologies. In this direction, electrochemical sensors and biosensors are promising tools, suitable for fast analysis, based on inexpensive instrumentation and simple operation protocols. Electrochemistry is shown to be very unique in the evaluation of antioxidant power of natural antioxidants because electric oxidation potential of a compound matches with its expected antioxidant activity. Indeed, oxidation potential and antioxidant power are inversely related, so that when oxidation potential is low it means that analytes could be oxidised easily, i.e. they have more antioxidant capacity. One of the main advantages of electrochemistry over traditionally used assays is that electrochemical approaches evaluate the overall reducing power of antioxidant compound present in food and biological samples, without the use of reactive species. Voltammetric approach allows not only the easy determination of antioxidant activity but also allows to consider such problems as the electrochemical behavior of potential antioxidants and the influence of chemical structure and individual functional groups on their redox properties.

For determination of antioxidative capacity of foods and characterization of natural antioxidants, different cyclic multi-pulse voltammetric techniques will be used, such as cyclic square-wave voltammetry (CSWV) and cyclic normal pulse (CNPV) and differential pulse voltammetry (CDPV) [10]. Voltammetry is an electrochemical technique in which the current-potential behaviour at an electrode surface is measured. The potential is varied in some systematic manner to cause electroactive chemical species to be reduced or oxidized at the electrode. The resultant current is proportional to the concentration of the electrochemical species. Hence, voltammetric response can be used for identification (based on redox potential) and quantification (based on voltammetric current response due to redox reaction at the electrode surface) of compounds. Selection of the type of working electrode is crucial for obtaining an electrochemical response that is useful for analytical purposes. In this investigation three types of working electrodes will be used, including glassy carbon electrode (GCE), paraffin-impregnated graphite electrode (PIGE) and electrode with a catalyst immobilized on its surface (chemically modified electrode).

Our group was engaged in electrochemical characterization of natural antioxidants using GCE and PIGE. We have developed square-wave voltammetric method on glassy-carbon electrode for characterization of gallocatechins in teas, and proved that this method can be used as an alternative method to more expensive, laborious and time-consuming HPLC methods. We have also shown how the antioxidant properties of tea leaves can be quickly assessed by abrasive stripping square-wave voltammetry using paraffin-impregnated graphite electrode without extraction of electroactive compounds from tea leaves. One of the main advantages of using PIGE is that compounds can be measured directly, without previous complicated sample preparation procedures. In one of our recent articles, we presented a new abrasive stripping square-wave voltammetric method on PIGE for qualitative estimation of antioxidant activity of various fruits and vegetables, based on quick estimation of electro-oxidation potentials of some compounds existing in analysed samples.

This project is a continuation of our previous research on antioxidants. One of the goals of this project is to develop and validate simple, fast, reliable, sensitive and precise electroanalytical method for determination of total antioxidant capacity of food, which could be used for routine food analysis in research laboratories as well as in industry. Properties (optimal working conditions, sensitivity and selectivity) of different electrochemical sensors (glassy carbon electrode, paraffin-impregnated graphite electrode) in model and real solutions will be investigated. Furthermore, special attention will be given to development of electrochemical sensor for fast screening of antioxidant capacity of food which would not require complicated sample preparations.For this purpose, paraffin-impregnated electrode will be used.

Many evaluation methods of the antioxidant activity of food components have been developed, such as active oxygen species scavenging capability determination and the measurement of lipid peroxidation suppression [11]. Good free radical scavengers react fast living small amounts of unreduced oxidant [4]. Spectral, acid-base and redox properties of the radicals can be investigated by the pulse radiolysis technique [12]. The chain-breaking activity can be assessed during the oxidation of methyl linoleate in a micellar solution [13, 14]. The kinetics of quenching reactions of singlet oxygen with antioxidants is measured by the laser flash photolysis [15, 16]. In voltammetry, the measurement of antioxidant capacity is based on electrocatalytic mechanism in which a stable electroactive radical is chemically regenerated in the reaction with antioxidants [17]. Alternatively, the radical is generated by electrode reaction and consumed by the antioxidant [18]. In the proposed project these reactions will be applied to the mixture of antioxidants in order to determine the dependence of total antioxidant capacity on the composition of the mixture.

Cyclic multi-pulse voltammetric techniques, which will be used in the envisaged investigation, possess two time windows [10, 19]. The first window depends on the pulse duration and the second one is a function of the rate of staircase ramp. This unique property will be used for the measurement of the rate of electrode reaction and the rate of chemical reaction of  the product with antioxidants, respectively. The rates and mechanisms of these reactions will be determined by the comparison with theoretical models that will be developed for single and consecutive electron transfers [20] and for molecules containing several independent or conjugated redox centers [21]. Our group is specialized in the theory of electrode reactions [22].

Šebojka Komorsky-Lovrić, Efficacy of an antioxidant under equlibrium conditions,  Journal of Electroanalytical Chemistry 748 (2015) 58-60