Incredible efforts are invested in detecting the role of genetics in disease through genome-wide association studies (GWAS). Characterizing the genetic background for the onset of human disease, often measured in thousands, and tens of thousands individuals sequenced produced vast amounts of data, but have so far fallen short of expectations in terms of proposed biological mechanisms. This reflects the complexity of human genomic space and the difficulty of ascertaining exact functions individual genomic loci exert.

The vast majority of disease-associated genetic variants fall outside of coding regions posing significant difficulty in identifying its biological effect. The non-coding variants are presumed to exert their effects by disrupting an element with either functional (e.g. enhancer) or structural role (e.g. boundary of a chromatin loop) leading to deregulated transcription of a target gene. Often GWAS studies assign a non-coding variant’s effect to the closest gene in terms of genomic distance, or the few within relatively short distance. However, this approach neglects the three-dimensional structure of the genome and fails to consider that many genes are subject to long-range regulation by enhancers.

Interestingly, genes that are often under long-range regulation are developmental genes such as SHH, MYC and SOX9 which are under strict spatio-temporal regulation. Furthermore, long-range regulatory elements are found to be grouped together on chromosomes in regions known as genomic regulatory blocks (GRBs). These regions display unusually high levels of sequence conservation, even when hundreds of millions of years have passed from the common ancestor. GRBs contain key developmental genes termed target genes and the genomic region around the gene comprising a multitude of regulatory elements. 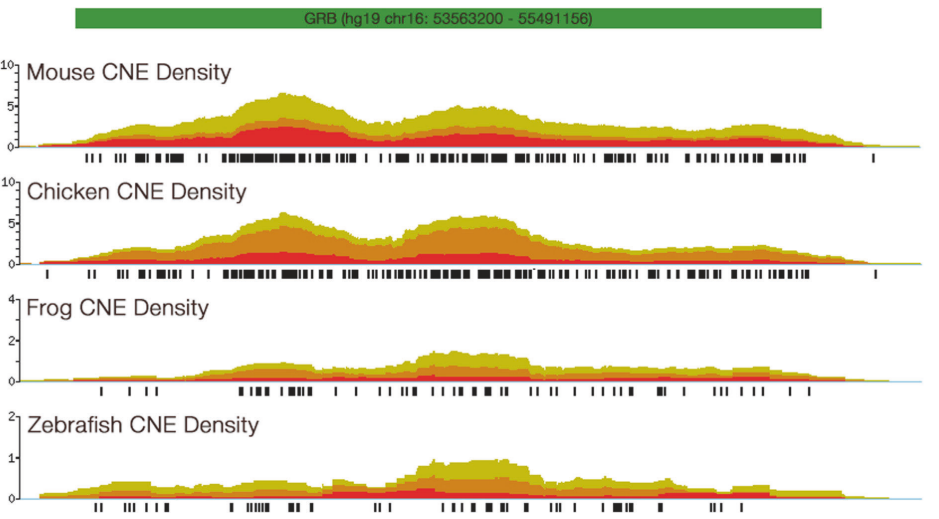 We aim to use the GRB model on a wide range of variants and phenotypes available in the GWAS catalog in order to identify the cases where non-coding GWAS hits are involved in long-range regulation. It would present a starting point in understanding complex disease and the underlying molecular mechanisms with the aim of developing successful advances towards a cure. Finally, the main aim of this project is to start investigating higher-order interactions between regulatory elements within the genome, resulting in combinatorial patterns specific for certain diseases.
GRB model applied on Schizophrenia study: http://targpred.irb.hr/
Soon applied on multiple studies from GWAS catalog (est. 2022)