The RBI accelerator facility is the largest research infrastructure in Croatia and the only one that regularly provides access to foreign researchers. Laboratory for Ion Beam Interactions of the Experimental Physics Division within the RBI manages the facility. The Facility is entirely located in Tandem Van de Graaff building that consists of three halls (Tandem VDG accelerator hall; Tandetron accelerator hall; experimental beam lines hall), offices, mechanical workshop and lecture room.

Since the first Transnational Access that has been provided through the FP7 project SPIRIT in 2011, the international users’ access to accelerator facility continued to grow. Today, international users can apply for a beam time through different channels. Since 2017, when Croatia became a full member of CERIC-ERIC, 5 experimental end stations are offered twice a year through the Call for Proposals of the consortium. Two current Horizon 2020 projects are also providing Transnational Access. The first one is  AIDA2020 through which proposals for detector characterisation have been accepted during the period 2017-2020. The second one is the RADIATE project launched in 2019. RBI is one of 11 partners that participate in RADIATE transnational access for researchers from Europe, with up to 400 hours of beam time per year. Finally, since 1997, when Agreement between IAEA and RBI about the use of accelerator facility was signed, researchers from IAEA and its Member states can also access the accelerator facility. A CRP project that will fund users grants to use beam lines at RBI has been launched recently. 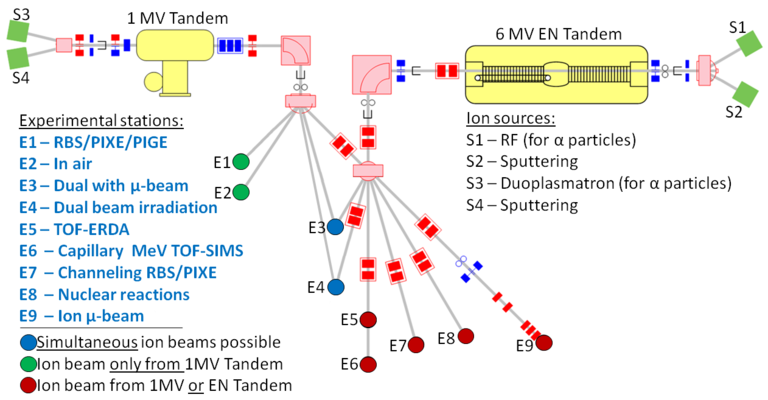 The RBI accelerator laboratory was established in 1987 when 6.0 MV EN Tandem Van de Graaff accelerator was installed after donation and shipment from the Rice University, Huston, USA. At the beginning, only protons and light ions were used mainly for PIXE and RBS analysis applications, as well as for measurements of basic interaction parameters such as x-ray production cross sections and elastic scattering cross sections of importance to PIXE and RBS. The first ion microprobe based on OM magnetic quadrupole doublet was installed and became operational in 1991. The major upgrades of the EN Tandem have been accomplished in the period 2004-2010. These upgrades were funded primarily by EU and IAEA projects and included: installation of the inclined field accelerator tubes (Uppsala University donation), installation of multicathode sputtering ion source 40 MC-SNICS (NEC) and Alphatross (Oxford University donation), new vacuum system, as well as in house developed computer control of the accelerator.

Today EN Tandem is providing between 1500 and 2000 beam time hours per year. Heavy ions, such as Au, I and Cl are typically used for ERDA, W, Cu and Fe ions are used for fusion related experiments while Si, O and C are used for damage studies in detectors. Light ions Li, 4He and 3He are used typically for analytical applications (RBS and NRA), while protons serve mostly as a probe for charge transport properties investigations using IBIC (including in-air experiments) and energies of up to 8 MeV. For the most of the ion beams a sputtering ion source is used, while for helium ions we operate RF gas source with Rb charge exchange. Due to the limited insulating gas pressures in the accelerator tank that can be obtained, maximal terminal voltage of the EN tandem is currently set to 4 MV. Minimal terminal voltage used is 0.5 MV.

1.0 MV Tandetron accelerator has been commissioned in 2005 through the projects funded by IAEA, and Ministry of science and education of Croatia. It has been installed in a new hall attached to the existing EN Tandem building. From the very beginning accelerator was able to deliver H ions from old duoplasmatron ion source to all existing beamlines. Very soon after commissioning, two new beam lines which can accept ion beams only from 1.0 MV accelerator were constructed.

Today 1.0 MV Tandetron has two ion sources. The SNICS sputtering ion source (NEC) with a single cathode has been funded by EU project, while the new duoplasmatron ion source with Na charge exchange (HVEE), funded jointly by IAEA and Ministry of science and education of Croatia, has been commissioned recently (2019). Terminal voltages used so far span from 200 kV up to 1.0 MV. Duoplasmatron ion source is used currently for 3He and 4He beams, while for all other ions (H, Li, C, O, Si, Cl, Cu, etc.) a sputtering ion source is used.

After being accelerated, ions exit the accelerator with high velocity and high energy. To control their direction, strong magnetic fields bend and focus ions into a beam – an ion beam.

Ion beam travels in vacuum conditions to one of the end stations (experimental chambers) that are attached to the accelerator.

We cannot see ions travelling in a vacuum. Taking a picture of the ion beam requires letting the beam out of the vacuum, in the air.

In the images below one can see positive Hydrogen ions (protons) accelerated to 2 MeV, which is the energy that proton gains as it is accelerated between 2 million volts of potential difference. High energy ions interact with particles that are present in the air. Energy is released during these interactions in the form of photons, which enables us to see ion movement and energy loss during the process.

Pictured ions have a range of 7.5 cm in the air. After this distance majority of the ions lose all their initial energy and are stopped. Most of the energy is lost at the end of the range, in the region of the so-called Bragg peak. The ion beam broadens as it penetrates through the air due to collision events causing ions to deviate from the primary beam direction.

Similar process occurs when the ions interact with any other medium. Using various nuclear techniques, we can study or modify the properties of the materials being exposed to ion beams. Details about these possibilities are described in the section about our experimental chambers and other equipment. Each chamber is designed for a different purpose to cover a wide range of possible applications and techniques