RBI accelerator facility and the earthquake (and the corona) 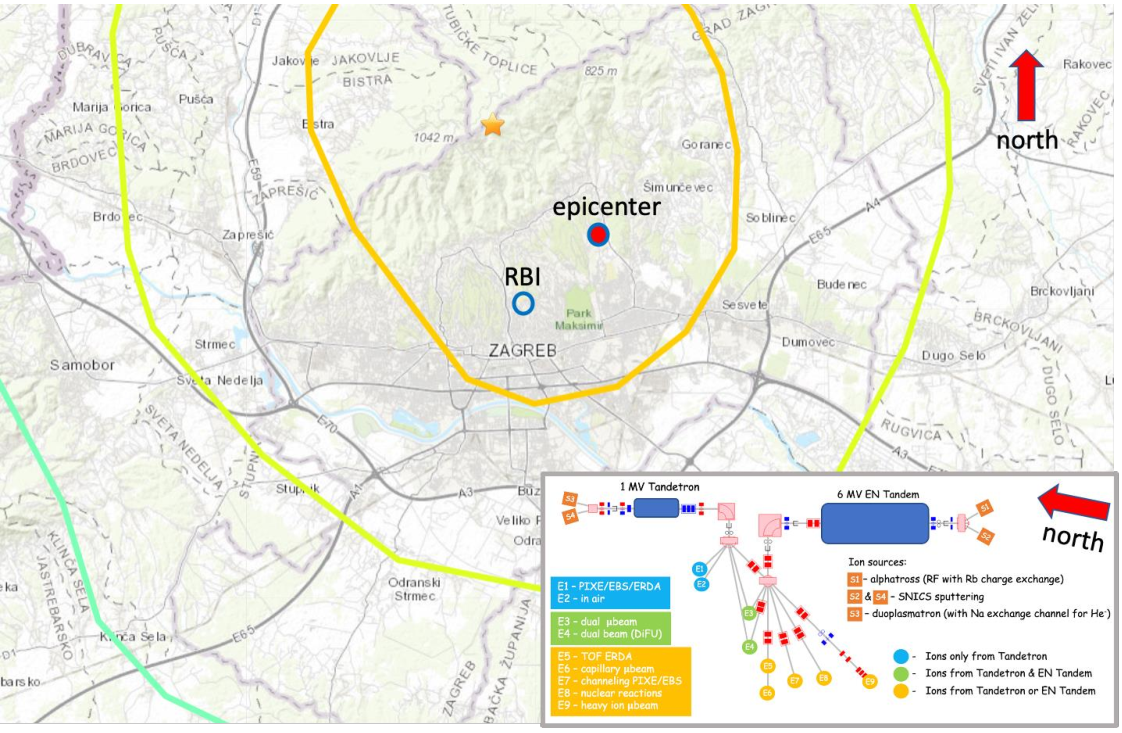 On Sunday the 22nd of March, at 6:22 in the morning, an earthquake of 5.5 magnitude hit the city of Zagreb and its surroundings. Its epicentre was 10 km underground and approximately 10 km northeast of the RBI campus and its accelerator facility. Orientation of both of the tandem accelerators is close to the north-south direction. An earthquake happened just 3 days after the RBI accelerator facility has been closed due to the corona crisis. All electronics and the vacuum system have been shut down as well.

Few hours after the earthquake, as well as in several other occasions that followed, staff of the lab checked visually for possible damages and confirmed that apart from some relatively small cracks in the walls that did not influence the statics of the building, no other facility components were damaged.

However, during the restarting procedure that has been initiated 5 weeks after the earthquake, on Monday the 27th of April, it has been realized that several vacuum leaks were opened in beamlines, probably due to shaking of the vacuum tubes in all of the three halls (EN Tandem, Tandetron and experimental hall). By the end of the week, most of the leaks have been identified and solved, while 1.0 MV Tandetron was put into operation as well. During the week that started on Monday the 4th of May, beams from the Tandetron were already successfully delivered to most of the beam lines. At the microbeam line, transmission has been even improved, which we attributed to the beneficial influence of the earthquake.

Initial operation of the EN Tandem van de Graaff indicated that we might be lucky with a big accelerator as well. Soon, we have obtained 3 MV terminal voltage (as expected for only 8 bars of insulator gas - N2/CO2 mixture), ion source was operating properly and the beams were analysed to the Faraday cup just after the 90 degree magnet. But, this was an end to the claims that the earthquake had only positive influence, since the ion beam could not be passed through the switching magnet to the experimental area.

The first hypothesis was, that the newly installed deflector to be used for pulsing the beam was not properly positioned. By shifting the analyser slits to the higher analyser angle, we could get some beam, but it was obvious that we have to realign the system, suspecting that actually the quadrupole positioned in between these two magnets was moved.

Opening of the vacuum tubes around these two magnets showed immediately that the beam direction from the analyser magnet to the switching magnet was translated by at least 2 cm towards the north. We still did not have a clue why this happened, until we noticed that the entire support of the 90-degree magnet (6 tons) has been shifted towards the north by these 2 cm !!

Surprisingly, the fact that the distance between the accelerator and analyser magnet has been increased by 2 cm, did not influence the vacuum was quite interesting. The solution of this puzzle could be explained by the way the connection between the vacuum tube and slits before the magnet has been realized. The seal surface happens to be outside of the 2-inch tube which can be (by a strong force – which earthquake obviously was) pulled out or pushed in. Some traces of this action are even noticeable at the above pictures.

Fortunately, after we realized that the whole 90-degree magnet has been displaced, we needed less than an hour to realign it back to its original position.

But, all these findings, gave us a hint to check if the accelerator tank itself has been moved as well. And it was not a big surprise to find that it actually did. Fortunately (again), the tank was only shaking and probably stabilised after the earthquake at its original position. The tank is supported by a total of 8 legs and each of those have noticeable traces of these movements. The most visible one is shown below, where tightening screw at the plates that hold the tank at the support legs made a scratch of 30 mm. Most of these support plates have been sliding during the earthquake which can be noticed by pieces of paint that have been rubbed away.  However, at some of the support legs this connection was strong enough and no traces of movements were found up there. For these legs, we have noticed cracks down in the floor.

By the 7th of May, all these troubles have been solved and both accelerators are now working, waiting to start the regular weekly schedule of experiments from Monday the 11th of May 2020.

We have observed significant movements (up to 30 mm) of the heaviest parts of the facility (EN tandem and 90-degree magnet) in the direction north-south. Although the equipment is less stable in this particular direction, and taking into account that an earthquake epicentre is in the direction of northeast, we could not find any indication of equipment movements in the east-west direction. This is in agreement with observations at the neighbouring Mirogoj cemetery where tombstones that had weak support in north-south direction have fallen down. Probably we can also claim that the smaller movements in east-west direction reduced a risk of damage to the accelerator columns that would surely be much more vulnerable to strong lateral shakes.

We believe also, that due to the corona crisis lockdown, and subsequent closure of all the vacuum pumps, damages on the vacuum system have been completely avoided. Although we are not aware on the experience in damages that strong earthquake could do to fast-rotating turbomolecular pumps, we believe that corona lockdown prevented larger damages of the earthquake to the accelerator system.

For more information about this subject send an email to jaksic@irb.hr