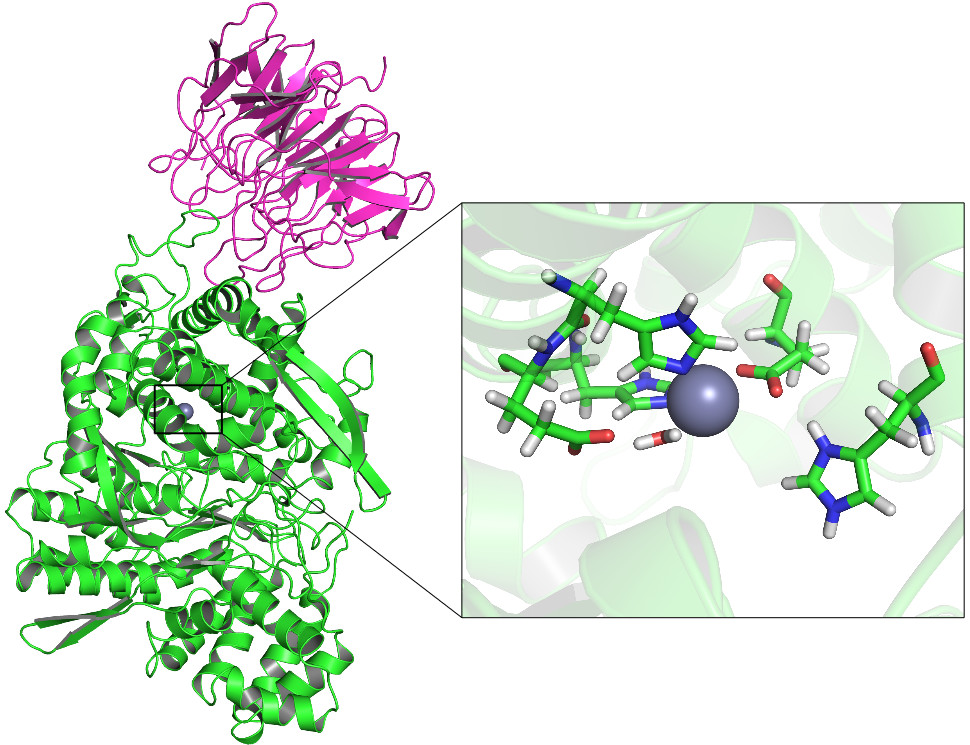 The exopeptidase dipeptidyl peptidase III (DPP III) has recently attracted attention of several research groups all over the world. It is broadly distributed in mammalian tissues and thought to contribute in the final steps of the normal intracellular protein catabolism. However, pronounced affinity for some bioactive peptides (angiotensin II and III, opioid peptides) suggests more specific functions. Also, there is an increasing amount of experimental evidence indicating involvement of DPP III in development of some cancers in human. Yet, the knowledge of its exact role in these processes is still unsatisfactory.

The aim of the proposed research is to advance the knowledge about biological relevance of this zinc dependent enzyme and its influence on human health. To this aim we plan the following activities: (1) development of new parameters for the zinc ion in proteins and optimization of the computational approaches in study of a metalloenzyme structure followed by the combined, computational and experimental study of the metal ion exchange in human DPP III (hDPP III) and identification of the potential inhibitory metal binding site, (2) research on involvement of DPP III in the Nrf2-Keap1 signalling pathway in order to shed some light on its role in the oxidative stress, (3) improving knowledge of the hDPP III natural substrates in human, and (4) searching for new, potent inhibitors of the hDPP III catalytic function. For the purpose of the dissemination of information about importance of DPP III and to improve our collaboration with
the foreign scientific institutions we plan to present our results at international conferences and to organize the symposium thematically related to DPP III, ourselves.

Although a trace element, zinc has a significant role in human health. It is known that it has an active role in hDPP III catalysed peptide hydrolysis, but nothing is known of the potential inhibitory metal binding site. Also the metal exchange mechanism in hDPP III is not known. The zinc parameter that we have used in our previous molecular dynamic (MD) simulations of DPP III orthologues enabled us to reliably model the enzyme structure and flexibility. i.e. the simulation results nicely agreed with the experimental ones. However, we noticed strong preference for octahedral zinc coordination even in the most compact structure of the enzyme-substrate complex for which the quantum mechanics - molecular mechanics (QMMM) calculations on the reaction mechanism suggested tetrahedral Zn2+ coordination as the most appropriate for the reactant. For the purpose of reliable molecular modelling of the processes in which the metal ion is in the focus of interest we shall develop new parameters for Zn2+. For this purpose we shall use QM and QMMM methods in combination with the MD simulations and the microcalorimetry.

In order to determine the role of DPP III in the carcinogenesis we shall investigate its involvement in the Keap1- Nrf2 pathway at molecular level. The combined computational (all atom molecular dynamics simulations) and experimental (kinetic, spectrometric, structural and thermodynamic) approach should advance the knowledge of the molecular basis of the hDPP III – Keap1 interactions and their implications on cell processes.

The data on high concentrations of DPP III in the superficial laminae of the spinal cord dorsal horn in rats, where this enzyme co-localizes with enkephalins and endomorphins, together with the finding that DPP III can degrade these opioid peptides in vitro, support the role of DPP III in the endogenous pain-modulatory system in mammals. Within this project we plan to investigate a series of about 10 neuropeptides, both computationally and experimentally. Identification of potential new substrates among them would be a valuable aid to elucidation of the DPP III roles in human. Finally, a series of fluorescent guanidinium carbonyl-pyrrole conjugates will be studied. The kinetic, fluorimetric and microcalorimetric studies of their binding to the wild type hDPP III and its inactive mutant E451A will be combined with MD simulations and the binding free energy calculations.

In summary, our research should advance knowledge of the molecular basis of protein-protein (DPP III – Keap1) and protein-ligand (DPP III – peptides/inhibitors) interactions and their implications on cell processes as well asbiological role of hDPP III. The study should suggest directions for development of the pharmacological  molecules with potential to control mechanisms in which hDPP III participates. Finally, the newly developedparameters for zinc ion will be beneficial not only for DPP III but also for the other zinc dependent proteins with similar metal binding site.