A Lecture on Multimedia Approaches to Computer Animation

Organized by the Center for Informatics and Computing (CIC) of the Ruder Boskovic Institute on Friday, Dec 9th  2011 in the auditorium in Wing III of RBI at 14:00, dr. Karolj Skala, head of CIC and Mr. Kristijan Mrsic, director of visual effects in HRT “Croatian kings” series will give a lecture entitled: "Visual Effects: From the beginning of the development of computer graphics at Ruđer to the complex visual effects in the movie Croatian kings".

The New Tendenciesmovement in 1960 introduced the computer into the sphere of creative pictorial-visual expression. At that time, IRB began various forms of experimentation with  and the creation of basic imaging algorithms with the help of computers. A version of a light pen was developed  and the drawing of different pictures on oscilloscope screens began. Various light pointers which were computer controlled where also developed at RBI. Thus, the scientific community at RBI in terms of having the most advanced computer capabilities tended to develop pictorial expression using a computer, which led to the development of computer graphics and visualization.  The Center for Informatics and Computing of RBI specially developed simulation programs as well as programs for scientific visualization. Intensive development has been spurred on with the appearance of personal workstations, Cluster, Grid and Cloud computing systems. Today computer graphics can access unimagined dimensions in a multidimensional complex imaging system with real-time visualization, creating virtual scenes and worlds. This technology is used by modern computer set design which has been intensively developed by the film industry.
The Croatian kings documentary series is one of the largest projects developed by  Croatian Radio and Television. In the making for almost 2 years, hundreds of people where involved, but interestingly, only four were involved in the development of visual effects and 3D computer animation for the project.  The visual effects work required an explicit multidisciplinary and innovative approach to problem solving. As visual effects supervisor Kristijan Mrsic, an associate of the Center for Informatics and computing at RBI, had at his side Boris Hergešić a veteran of 3D computer animation and digital set design.   Depending on the situation, the duo was joined by an expert in dynamical simulations,  Aleksandar Faraguna.
The story behind Croatian kings covers the period from the 8th to 12th centuries, an early part of our history and therefore relatively unknown to most people. It took a lot of research and interviews with historians such as Professor Ivica Dlesk in order for the reconstruction of historical buildings to be as close as possible to the original layout. Research and development is an essential part of the process of creation, and without this step it would not be possible to create the quality and quantity of complex images that the story ofCroatian kings required. For the purposes of the television series, a whole series of different personnel were required to create the multiplication of soldiers, ships, digital injuries, reconstruction of churches and even entire cities. A whole range of techniques and approaches were used to handle images that you will have the opportunity to see up close in this presentation. 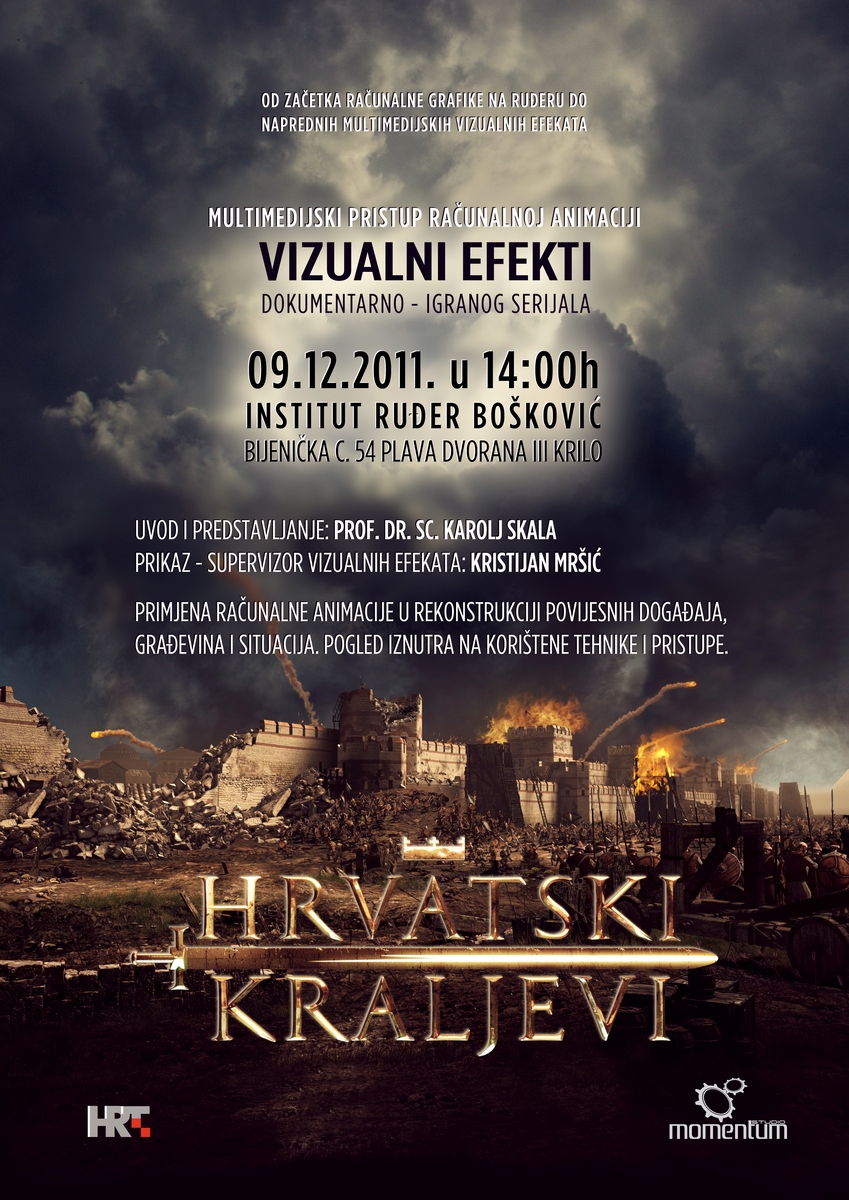