A scientist at the Ruđer Bošković Institute, Marija Abramić, Ph.D., Head of the Laboratory for Cellular Biochemistry, is the coauthor of a paper entitled Entropy-driven binding of opioid peptides induces a large domain motion in human dipeptidyl peptidase III, which represents an important contribution to the understanding of the interaction of proteins and peptides and the relationship between the flexibility and function of protein macromolecules. 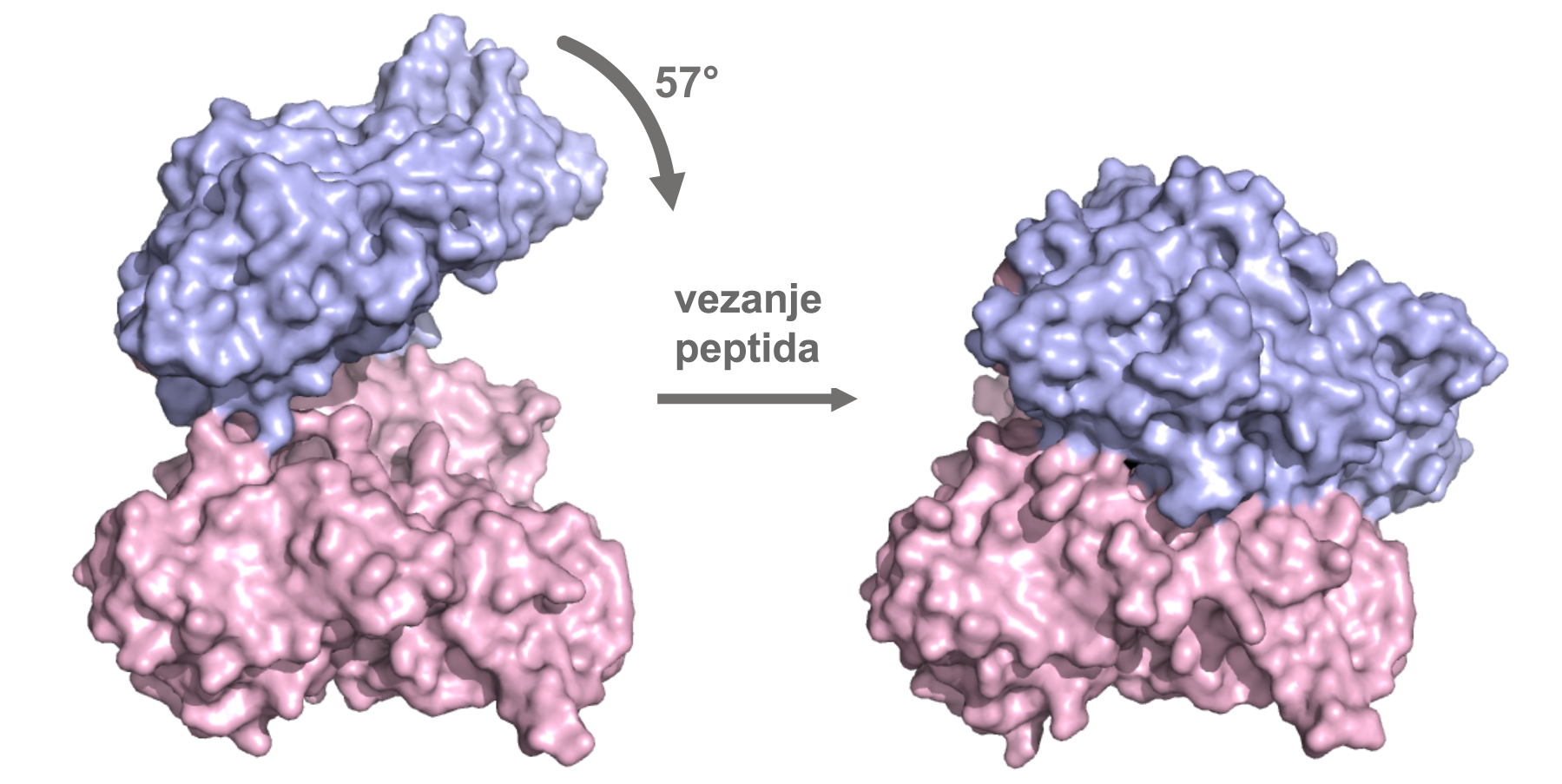 Presentation of the flexibility of human dipeptidyl-peptidase III. The left is a free protein (open form) prior to interaction with the peptide substrate and the right is a complex DPP III substrate (closed form). Binding of the peptides causes great shifts of two protein domains (indicated in blue and pink) and the complete closure of the active enzyme site.

This paper by an international team of scientists, published in the Proceedings of the National Academy of Sciences of the United States of America, presents the solution of the crystal structure of the human enzyme dipeptidyl peptidase III (DPP III) in interaction with its substrate, opioid peptide tynorphin. Clarification of the manner in which this peptidase binds it substrate reveals the exceptional flexibility of this molecule and its association with the catalytic role of this enzyme.

DPP III is present in all mammalian tissue and is found in the genomes of a large number of lower organisms and some bacteria. In addition to its role in intracellular protein degradation, the role of DPP III is indicated in a highly complex physiological process of pain sensation. This is evidenced by the presence of the enzyme in the area of the spinal cord that contains opioid peptides (enkephalins and endorphins), the hydrolysis of which is very efficiently catalyzed by DPP III.

Besides DPP III’s physiological roles, pathophysiological roles are presumed in the development of cataracts and tumor growth. The research results are also significant from the biomedical viewpoint because they open the possibility for designing specific inhibitors of these peptides due to their presumed physiological role in regulating pain in mammals.

This scientific paper is the result of the interdisciplinary collaboration by researchers from the Institute of Molecular Biosciences (Austria), the Institute of Biochemistry (Austria), the Structural Genomics Consortium of the University of Toronto (Canada) and the Ruđer Bošković Institute. The cooperation mainly occurred within the Croatian-Austrian bilateral project Structure-Function Relationship in the Metallopeptidase Family M49, based upon years of research conducted at the Ruđer Bošković Institute