Lecture Held by the Ambassador of Brazil

Yesterday at the Ruđer Bošković Institute, the Ambassador of Brazil, H.E. Luiz Fernando G. de Athayde, in the presence of the acting General Director of the RBI, Dr. Marin Roje and fifty guests, presented a lecture entitled "Science and Innovation in Brazil, a Path to Economic Growth.” The lecture discussed the rise of Brazil toward the status of a new global force, with particular emphasis on scientific and technological policy and its relationship to economic growth. 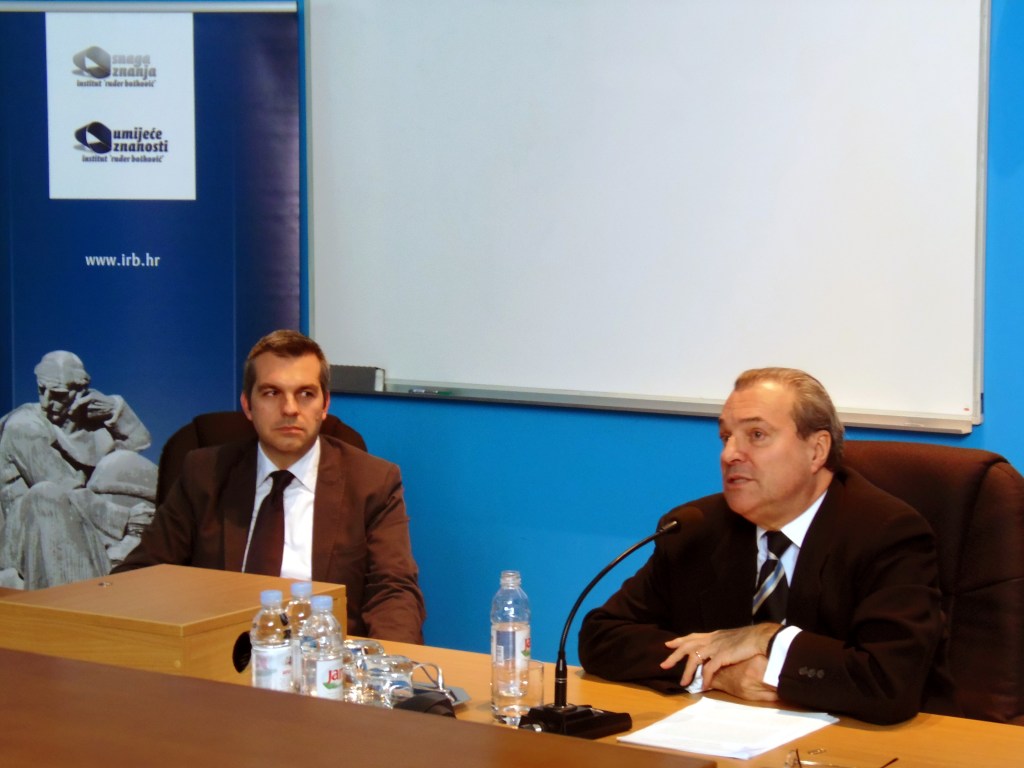 In the introductory section of the lecture, Ambassador Athayde emphasized that Brazil is not only a country of soccer and carnival but also the fifth largest country in the world in terms of area and population, with the sixth largest economy. Furthermore, the ambassador said that in the last couple of years Brazil has had record rates of export, a low unemployment rate (5.5%) and a growing middle class.  There has been a particularly significant amount of foreign direct investment (FDI) in Brazil, totaling 66.7 billion US dollars in 2011, according to which Brazil ranks third in the world.

In the area of science and technology, Brazil ranks thirteenth in the world in terms of the number of published scientific papers and is a global leader in research in tropical medicine, parasitology, agriculture, oral surgery and medicine, entomology and veterinary medicine. During the period from 2001 to 2007, the number of patents in Brazil rose by 64% and 5,500 innovations  were registered from 2007 to 2010. The number of PhDs in science has grown by an average of 12% annually during the past decade.

The Second National Conference on Science, Technology and Innovation held in 2001 signified the beginning of the transformation of the technological innovation strategy into an instrument of economic growth.  In 2004, the Law on Innovation was adopted, which regulates private/public partnerships and transfers from public research institutions to the private sector. In 2005, the Law of Goods was adopted, which provided the private sector with fiscal incentives to invest in research and innovation. Today, the Brazilian Ministry of Science and Technology relies on 16 sectorial funds that represent the basis for the Brazilian System of Innovation.

Brazil directly promotes public/private partnership, of which the Triple Helix is a key concept, according to which the government, manufacturing sector and academia should act together in order to stimulate innovations that are not isolated from the needs of industry and the demands of the market.  Many positive aspects contribute to the development of the Brazilian System of Innovation—macroeconomic stability, a reliable juridical framework, the existence of a huge and still growing domestic market, the existence of technological parks, and national mobilization involving government, industry, academia and the civil society.

Based upon  the concept of the Triple Helix, the National Program to Support Incubators and Technological Parks was developed.  This network now comprises about 42 technological parks and over 400 business incubators in operation, involving 6,500 innovative firms.

It is particularly important to mention the Brazilian Government’s Science Without Borders program, in which two billion dollars are invested annually to provide scholarships for 100,000 Brazilian students, making it possible for them to study at the top universities in the world. The goal of the program is to eliminate Brazil’s shortage of PhDs in the industrial sector.

Ambassador Athayde also spoke about Plano Brazil Maior (Plan for a Greater Brazil), which is focused on the system of innovation as the driving force for Brazil’s competitiveness and has the following goals: the increase of funding, the improvement of legislation, the adoption of tax incentives and the regulation of government procurements.

In conclusion, Ambassador Athayde particularly emphasized the role of Brazil’s Ministry of External Relations in the innovation policy of Brazil and the active role of diplomats in promoting science and development. As a specific example, the Ambassador spoke about cooperation with China, which resulted in the launching of a network of observation satellites, the Earth Resources Satellites Program, with the goal of providing coverage of the world’s land areas.