New Significant Results from the Group for Hadron Spectroscopy 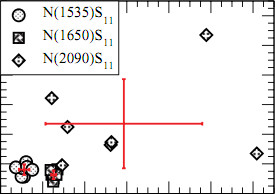 Following two significant papers in Physical Review Letters, members of the Group for Hadron Spectroscopy, Division of Experimental Physics, of the RBI, led by Dr. Alfred Švarc, published two related papers on excited nucleon states (1,2) manifested in the form of baryon resonances, in one of the world's leading journals of nuclear physics, the most recent issue of Physical Review C - Nuclear Physics.

Following several papers prepared in collaboration with international colleagues on this topic, the group members systematized the results of their years of research into two related papers that formulate the manner in which the Zagreb realization of the Carnegie-Mellon-Berkeley model can be generally applied as a tool to extract the pole positions from the worldwide collection of partial-wave amplitude data as a model, independently of their identification with scattering theory poles, which in principle represent nucleon resonance states.

The strength of this proposal, which opened the path for the publication of this study in such a prestigious journal, is that the proposed method can be applied to the introduction of poles as a model of independent quantifiers of nucleon resonant states in the largest secondary compilation of physical parameters and data: The Review of Particle Physics – Particle Data Group, in which the quantification of nucleon resonance states is currently performed in an unsatisfactory, model-dependent, manner.

Furthermore, it is important to note that the papers were prepared in collaboration with the University of Tuzla and have already served as the basis for two defended doctoral dissertations by by two young colleagues from Tuzla. The realization of this project is only the first step in achieving long-term cooperation between the RBI and University of Tuzla.