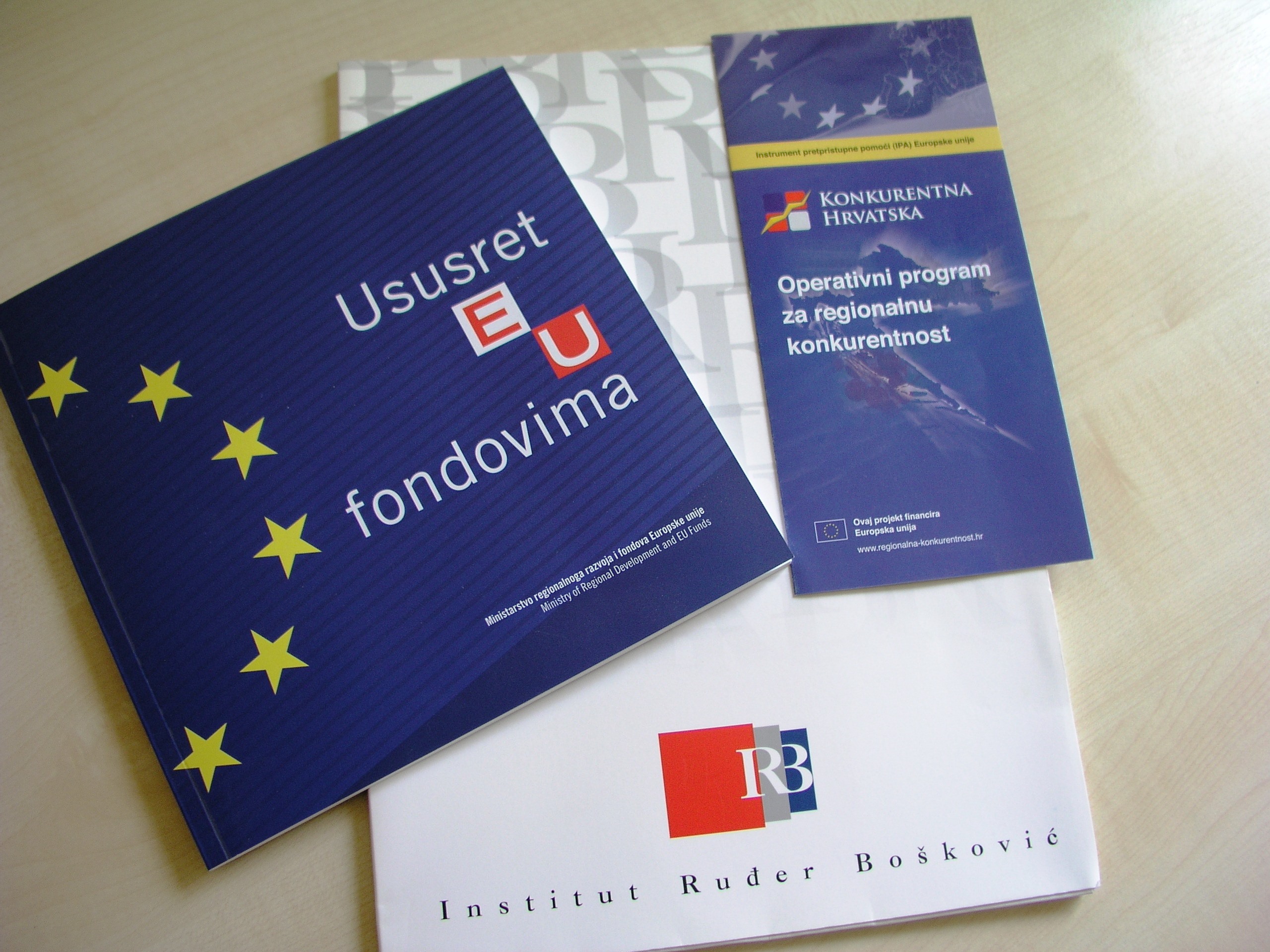 Since the beginning of FP7 programme implementation in 2007, the RBI scientists have participated in 28 projects valued at around €10 million. Considering the fact that Croatia has made a total of 248 projects, RBI occupies an enviable leading position in Croatia.

The success stories of projects at the Ruđer Bošković Institute (RBI) are in fact the stories about an excellent team of experts active within the Office for Projects and International Cooperation at the RBI. The fantastic four, namely Office manager Marijana Klasnić Kožar, Ines Cigula and Vanja Komljenović Lončar, under the guidance of David Smith, PhD, provide expert assistance and support to RBI researchers in preparing and executing projects financed by domestic and international funds. The Office for Projects has successfully realized 28 FP7, 22 IAEA, 5 INTERREG/IPA, 4 NATO, 8 HIT/BICRO , 174 bilateral projects, 17 HRZZ, 21 UKF, and is currently preparing four more projects for structural funds.

Asked as to how they would celebrate Croatia’s accession to the European Union, their answer was: “Working, as always. We’ve got too much work to do”. Even though the RBI scientists have recently had quite a cause for celebration, having obtained the European Union Seventh Framework Programme (FP7) project for the establishment of the latest innovation infrastructure for researching contemporary diseases such as cancer,  new projects are already being prepared. 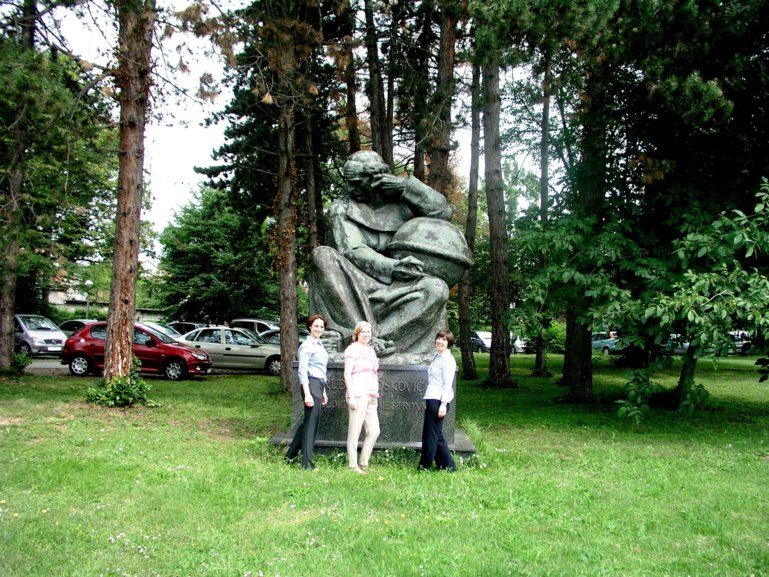 According to European Commission data for 2012, as many as 1173 research consortia from all over the European Union applied for research projects in the field of medicine, of which only 10% received funds. This speaks volumes of the scope of success of Ruđer’s scientists. Furthermore, RBI Laboratory for System Biomedicine in Planinska won a five million KN IPA project for the development of rapid detection and diagnostics by application of an original and novel biotypization method leading to reduced and selective use of antibiotics and timely treatment of tumors, and RBI has recently  become an affiliated centre of the International Centre for Genetic Engineering and Biotechnology, owing to the ICGEB project of the Division for Molecular Biology. Moreover, on the eve of EU accession, the Ruđer Bošković Institute has obtained 3.2 million KN from the relevant Ministry of Science, Education and Sports of the total amount of 8.4 million KN intended for financing applied medicine. Yet, this does not mark the end of RBI staff activities.

New projects are being prepared. Soon we expect to sign two interdisciplinary EU FP7 projects, one estimated at € 4.5 million, gathering theoretical physicists and the scientists from the Division of Electronics, and the other estimated at € 6 million in the fields of molecular biology and medicine. Apart from that, the Ruđer Bošković Institute staffs systemically work on four structural projects, of which just the core RBI Open Scientific Infrastructural Platform (   O-ZIP) project is estimated at about € 60 million.

Since the beginning of FP7 programme implementation in 2007, RBI scientists have participated in 28 projects valued at around €10 million. Considering the fact that Croatia has realized 248 projects total, the Ruđer Bošković Institute is at an enviable, leading position on the Croatian market.

Owing to precisely those European funds, the RBI has established the largest research facility in Croatia – the RBI Accelerator System. To be more precise, the Division for Experimental Physics houses the largest research infrastructure in Croatia – ion beam accelerator complex comprising of two accelerators and nine test stations. Most of the structural and FP7 projects of the Division for Experimental Physics are intended for the upgrade and development of existing equipment, which is used in basic, but largely also in applied research. By implementing the so-called Transnational Approach (TNA) to experimental devices with ion beams, alongside with financial support for guest scientists and domestic laboratories, this infrastructure has become an unavoidable European centre consolidating researcher mobility, with a prominent role in education through cooperation with Croatian universities. FP7 projects using this facility and focused on consolidating the existing capacities are the following: SPIRIT (FP7 project estimated at € 7 million), ‘Particle Detectors’, until recently the project with the highest budget in natural sciences in Croatia, funded by the European Commission with € 1.3 million, representing the first step of the Division for Experimental Physics researchers towards developing a novel research infrastructure for nuclear and particle physics in Croatia, as well as FP7 projects ENSAR and SPRITE, enabling the education of a significant number of experts in the field of nuclear physics.

Marine research in an EU way

FP7 project, RBI scientists from the Centre for Marine Research in Rovinj have become part of the BlueGenics project consortium, the value of which is estimated at € 6 million, and the objective of which is to study bioactive compounds from sea organisms that could be used in biomedical research and treatment of various conditions, such as cancers, viral diseases, malaria and inflammatory conditions. Moreover, the researchers of the mentioned Centre are, together with their colleagues from the Division for Marine and Environmental Research, involved in the EU project success story known as SMARTNANO, a four-year EU FP7 project worth € 3.5 million, directed at developing an innovative and financially acceptable technological platform which would enable detection, recognition, separation and measurement of artificially synthesised nanoparticles in complex matrices like food, cosmetics, biological systems and the environment.

One of the chief actors in the EU project success story is undoubtedly the RBI Centre for Informatics and Computing, having participated in as many as 14 projects (one in the capacity of leader) since 2003 under the guiding hand of Professor Karolj Skala. Projects such as CRO GRID, CLUSTER, etc. have contributed to establishing a complex computer system infrastructure for developing modern research, also enabling the education of a significant number of experts that have acquired know-how in areas where formal/ common university education is lacking. What is interesting is that the

Professor Skala is also the leader of the RIDE project, gathering Croatian infrastructural projects of total value estimated at around 200 million. Centre for Informatics and Computing is the smallest RBI team with only nine employees, but it has nevertheless participated in 15 projects, redirected a part of EU funds towards Croatia and used those funds for creating new technology and infrastructure, thus contributing to Croatian science becoming more global and mobile.

The RBI has so far received funds for infrastructural European projects estimated at around € 100 million, of which just the core RBI Open Scientific Infrastructural Platform (O-ZIP) project is valued at about € 60 million. The RBI possesses capital equipment worth over € 20 million, and one of the primary objectives of    O-ZIP is ensuring preconditions for the openness of the existing, as well as the future RBI capital equipment.

Apart from the    O-ZIP, the RBI has partnered with other institutions on three more structural projects, which have found their place on the indicative lists of the relevant ministries, such as the Croatian Centre for Advanced Materials and Nano Technology (in partnership with the University of Zagreb and the Institute of Physics), ZOO (Croatian Scientific and Educational Cloud) in cooperation with SRCE, as well as the Science Educational Entertainment Centre (SEEC).

Owing to means from EU projects, the RBI is able to conduct capital investment in infrastructure and equipment. Alongside with improving research quality through new structural projects, the Institute thus enables the accessibility of excellent research, equipment and know-how already present at the RBI to the wider Croatian academic community and economic subjects. This strategy will contribute to a more quality integration of the RBI into the European Research Area (ERA) as a top scientific-research centre. 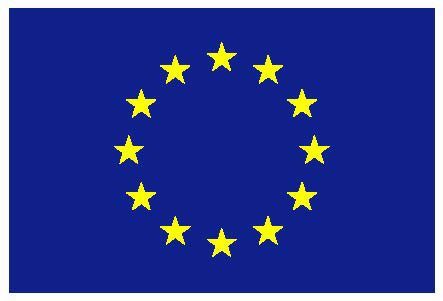 We have entered the final year of the Seventh Framework Programme and the last distribution of the € 60 billion intended for science by the EU. After joining the EU, Croatia will have at its disposal over € 1.5 billion, and it is upon us to make the best of it. Croatia’s goal is to use over 90 percent of financial support available from the European funds, as everything that is not used presents a ‘direct loss’.

The time is not on our side, the criteria are strict, and the competition is fierce. Croatian experts will have to deliver mature and highly competitive projects on time. Previous experiences confirm that the EU funded projects are approved only to the best researchers in Europe, and the Ruđer Bošković Institute …has proven, day after day, that it possesses human capital, know-how and technologies needed to obtain funds from the EU ‘treasury’. However, it is not lonely in those efforts, as Croatia has a critical mass in terms of human and capital resources required for successful competing for EU projects. We strongly believe that Croatia will be given the support that it deserves.