The RBI today presented the prestigious projects of the European Research Council (ERC) worth over 3.5 million euros at the special ceremony called ‘Science Oscars’. 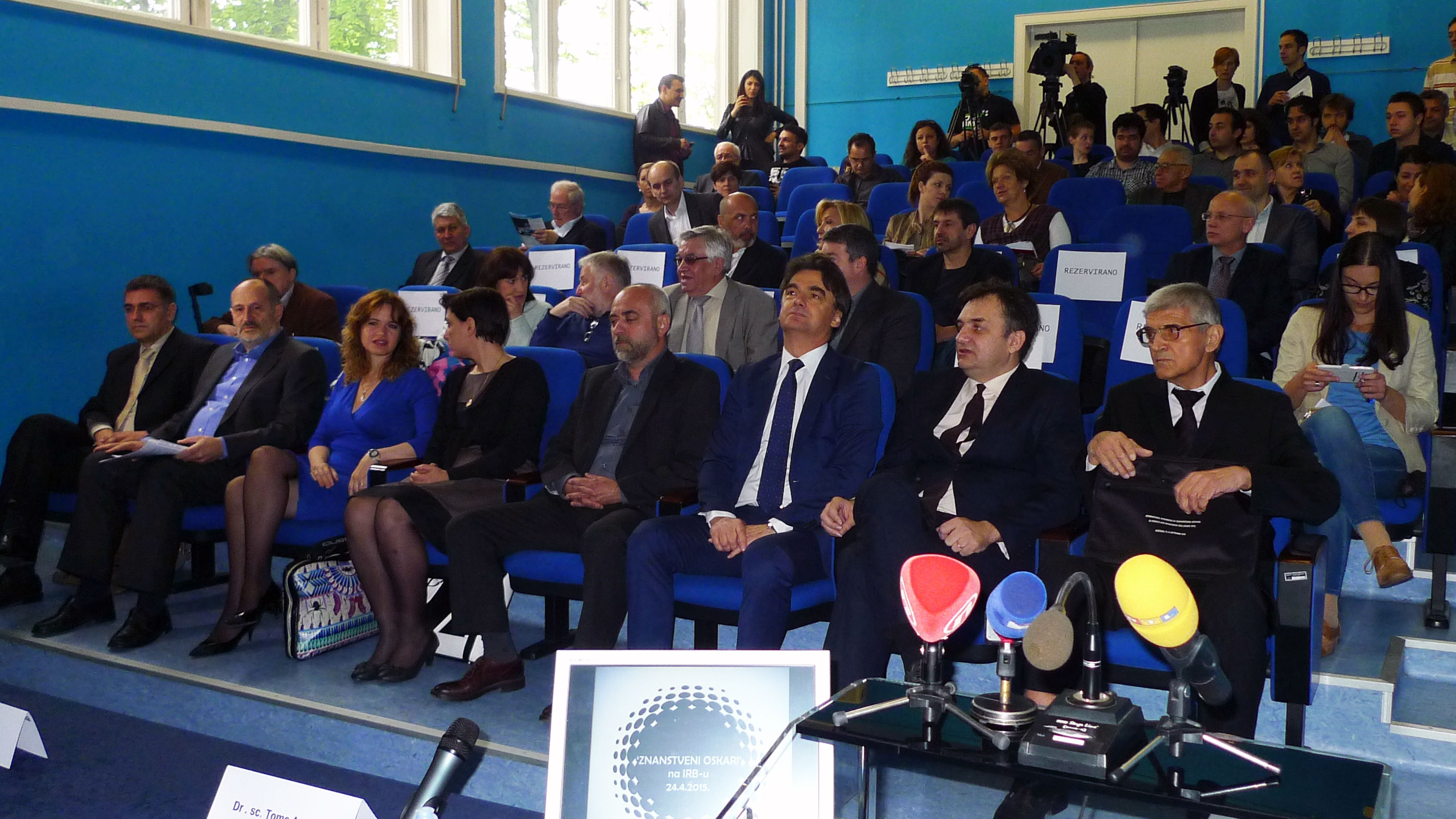 These prestigious grants were awarded to two excellent scientists Dr. Iva Tolic and Prof. Dr. Ana Sunčana Smith. The ERC funding will enable them to consolidate their research teams, recruit young researchers and equip laboratories to work on research that will contribute to the future development of new drugs and therapies.

Set up in 2007 by the European Commission, the European Research Council (ERC) is the first European funding organisation for excellent frontier research. It is considered the "Champions' League of science" as every year it selects and funds the very best individual scientists to run five-year projects in Europe.

Competitions are open to researchers of any nationality, age or scientific area hosted in a university or research centre based in the EU or in one of the countries associated to Horizon 2020. The applications are evaluated and selected after a peer-review process involving every year hundreds of renowned scientists coming from all over the world.

Scientific excellence is the only selection criterion, thus the competition for the ERC grants is fierce. The ERC selects only 8 to 15 percent of the best proposals from the total number of applications received. Therefore it is not surprising or pretentious that the RBI announced this ceremony as the 'Science Oscars’. Croatia currently holds four ERC grants, and the RBI is a proud winner of two (i.e. half).

The first ‘Science Oscar’ was brought to the RBI by Prof. Dr. Ana Smith who has been awarded a 1.5 million euro worth ERC Starting Grant. Her project ‘MembranesAct – Biological membranes in action: A unified approach to complexation, scaffolding and active transport’ was one of just 287 proposals selected for funding out of a record 3329 submissions.

The five year research project concerns membranes in living cells – structures which act at the interface of biology, material science and physics. Due to the complexity of membranes and the number of processes occurring simultaneously in their vicinity, the mechanisms driving and controlling protein transport and complexation are not well understood, though are believed to have a biophysical foundation.

Prof. Smith and her team aim to determine the biophysical principles behind these cellular processes and develop a theory that they will then test with collaboration partners. The first stage of testing will be carried out on biomimetic membranes, i.e. synthetic membranes that mimic nature, as simplified model systems. In the second test stage, living cells will be used. ''I hope our findings will be of fundamental importance for cellular biology.''  - Smith explains.  She is investing the 1.5 million euros mainly in positions for young researchers with whom she plans to form an interdisciplinary team at the RBI.

The ERC Starting Grant for Ana Smith did not come as a surprise. She is the author of a number of highly visible research articles in the most prestigious journals, has delivered over 100 invited lectures, and is the Chairwomen of the PhysCell conference series, which is now established as a leading meeting place for cell biophysicists in Europe. In 2009, she became a Rising Star of EAM, FAU-Erlangen, in 2011 she became a Kawli fellow and, immediately afterwards, a member of the Collegium of the Bavarian Academy of Sciences and Humanities. Despite these successes, Ana Smith never forgot her homeland and was trying to return to Zagreb ever since she completed her doctorate.

These efforts led to her appointment as an adjunct scientist at RBI in 2011. In 2013 she was recruited as a senior research associate, while still remaining a member of the faculty in Erlangen.
The ERC grant allowed her not only to fulfil her desire to live in Croatia, but also to start building a strong and internationally competitive research endeavour at IRB.

Thanks to Iva Tolić Croatia gained the first ERC Consolidator Grant. The European Commission designed these grants to support researchers at the stage at which they are consolidating their own independent research team or programme and to strengthen independent and excellent new individual research teams that have been recently created.

Dr. Iva Tolić was selected in the fierce competition of 2528 applications, and was chosen in the top 15 percent projects. Tolić received the ERC grant in the amount of 2,150,000 EUR for the project 'A new class of microtubules in the spindle exerting forces on kinetochores'.

Bridging microtubules have not been studied before because this requires cutting-edge microscopy and laser microsurgery techniques. ‘‘Strength of my research is in taking an interdisciplinary approach, which I will use in this project by combining laser microsurgery with genetic perturbations, quantitative measurements of the responses and comparison with theoretical models.'' – Tolić explained.

Understanding the role of bridging microtubules in force generation and chromosome movements will shed light not only on the mechanism of chromosome segregation, but also on the establishment of proper kinetochore-microtubule attachments and the force balance in the entire spindle.  This discovery could be important for the development of new drugs for cancer because most of the cancer treatments prevent cell division by acting upon microtubules.

Tolić is a distinguished young scientist whose scientific discoveries have put her in the spotlight both of the scientific community and the media. She is a winner of numerous national and international awards and honours including the Order of the Croatian Danica, a prestigious European Life Science Award and the European Biophysical Society Award. Moreover, it was only recently that one of the most prestigious scientific journals in the world – Cell, upon celebrating its 40th anniversary, welcomed Iva Tolic in ‘40 under 40’ - elite society of the 40 best young world biologists.

Tolić earned international reputation due to the research of complex cell processes. Namely, not so long ago in cooperation with her colleagues from the Max Planck Institute Tolić has discovered the first potentially immortal organism.  – a special kind of yeast, which was isolated from African beer. Another discovery by Tolić and her scientific team challenged the paradigm of chromosome capture that was introduced in the 80's.

They discovered a completely new mechanism of how microtubules, which divide the chromosomes into two equal parts, do not grow towards the kinetochores at the chromosome centre, but find kinetochores by pivoting around the spindle pole.

After spending nine remarkable years at the Max Planck Institute, Tolić has returned to the Ruđer Bošković Institute where she will establish a new research group in the Division of Molecular Biology and continue her research thanks to the ERC grant.

Besides media, today`s ceremony gathered distinguished government representatives, presented by Prof.  Branko Grčić, the Deputy Prime Minister and Minister of Regional Development and EU Funds, as well as the City of Zagreb representatives, and honourable scientific and academia representatives.

In the opening notes the RBI Director General Tome Antičić congratulated the ERC grant winners and thanked them for having chosen Croatia and the Ruđer Bošković Institute as the host of their future research. ''The European Commission has recognized the scientific excellence, commitment as well as high innovation potential of Iva Tolic and  Ana Sunčana Smith and welcomed them to an elite scientific society by awarding them with the generous ERC  funds. I am pleased that we were able to bring them back home. '' - said Antičić.

Prof.  Branko Grčić, the Deputy Prime Minister and Minister of Regional Development and EU Funds, joined the RBI Director in his congratulation to Iva Tolic and Ana Sunčana Smith. The deputy Minister specially thanked them for pursing their decision to work in Croatia at the peak of their international career.

Minister Grčić also stated that the RBI, as the largest research institution in Croatia and a market leader in granted EU and international projects, positions itself as an indispensable partner to the Government - '' Without the RBI we aren`t able to do anything, really. Without strong R&D, there is no sustainable industry or the economy.

The RBI is best in Croatia, which was once gain confirmed by the EU. Namely, the RBI capital structural project Open scientific infrastructural platforms for innovative applications in the economy and society (O-ZIP) was officially included in the operational programme of the European Commission 'Competitiveness and Cohesion' for the financial period of 2014 to 2020.

This government has always supported your work, and you can count on us in your future endeavours and success.'' - said Grčić.