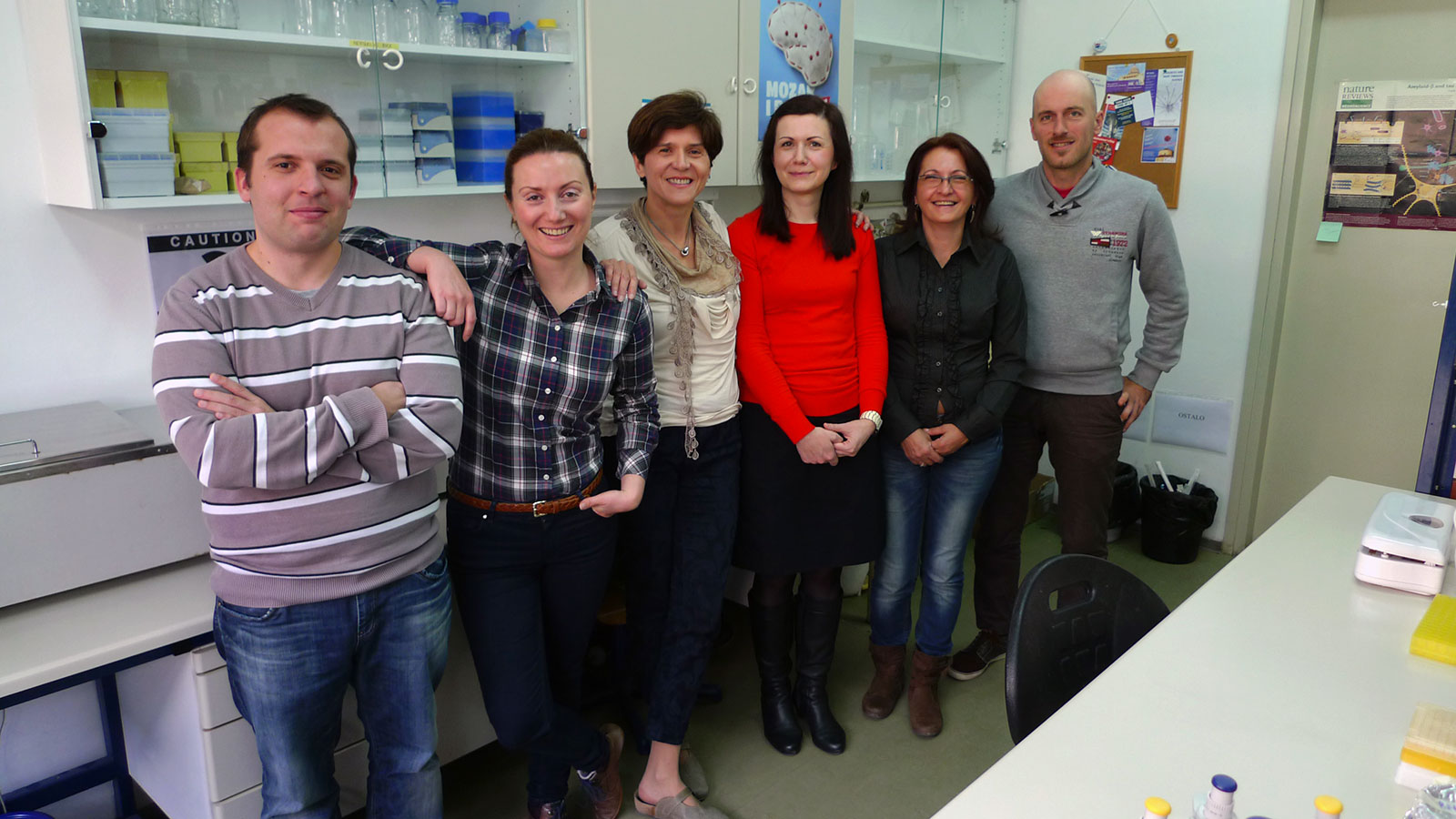 The RBI team from the Division of Molecular Medicine, led by dr. Silva Katušić Hećimović have become partners in the SCOPES project funded by the Swiss Science Foundation in the amount of 1.23 million kuna (164 thousand EUR).

Over the next two years the RBI team in collaboration with their Swiss colleagues from ETH in Zurich, together with their colleagues from the Institute for Biological Research of the University of Belgrade, will investigate the link between metabolism of APP - a key protein responsible for the development of Alzheimer's disease (AD), cholesterol homeostasis and the membrane transport.

Results of this research should contribute to a better understanding of the molecular mechanism(s) of this still incurable disease, thus contribute to the development of effective drugs and personalized therapies for the Alzheimer's patients.

Alzheimer's disease (AD) is the leading cause of dementia worldwide. Although it's been more than a hundred years since the discovery of the disease and the discovery of the main pathological lesions in the brains of patients with AD, such as senile plaques and neurofibrillary threads, there is still no adequate therapy either to treat the disease, slower its progression or prevent its occurrence.

Currently there are 26 million people s suffering from AD worldwide, and estimations warn this figure will grow to 108 million patients until 2050, unless in the meantime experts find any form of appropriate therapy. For now, the AD 'treatment' is reduced to relieving the symptoms of the disease, and not to treating its cause. Given that altered metabolism of amyloid precursor protein-β (APP), and altered levels of the peptide amyloid-β (Aβ) are the main cause of Alzheimer's disease, understanding the mechanism of the protein’s formation and decomposition as well as lessons learned from biochemical and genetic studies of APP processing will be crucial to the development of therapeutic targets to treat AD.

‘’Under this project we will investigate the molecular events and triggers that could be responsible at an early stage of Alzheimer's because as previous research has indicated, any form of new therapy for AD is most effective in the early stage of the disease. '' - said Hećimović.

Since the key proteins involved in the pathogenesis of Alzheimer's are actually transmembrane proteins, it is assumed that changes in the composition of lipids in membranes and their impact on membrane transport may affect the function of these proteins and their localization in the cell. "" ‘’Numerous studies have shown that altered cholesterol levels significantly affect the formation and/or degradation of the Abeta peptide, and that changes in membrane transport of the endosomal/lysosomal path as well as in the retromer complex path are major disorders which may lead to a AD. '' – explained Hećimović.

However, the molecular details of these observations are not yet known. It is quite interesting that rare hereditary disease of cholesterol disorder, Niemann-Pick type C (NPC), shows several similarities with Alzheimer's disease and is therefore also called the children's form of Alzheimer's. ''In this study we will use Niemann-Pick type C disease as a model, so by applying this innovative approach on the example of monogenic hereditary disease (as a result of dysfunction of the protein NPC1) we will try to elucidate the molecular events associated with the emergence of complex Alzheimer's disease. By using biochemical, molecular and cell biological methods we aim to investigate the interaction of APP metabolism, cholesterol homeostasis and (dys) functions of endosomal/lysosomal path and/or retromer complex path - two major cellular pathways involved in the pathogenesis of Alzheimer's disease.'' - explains Hećimović.

''The RBI team consists of five scientists from the Laboratory of Molecular Neuropharmacology, Group for Neurodegenerative Diseases Research of the RBI Division of Molecular Medicine, of which four associates are young researchers (doctoral and postdoctoral students). Moreover, this project, among other things, will enable these young scientists to attend necessary expert training.'' - concluded the RBI team leader dr. Silva Katušić Hećimović.