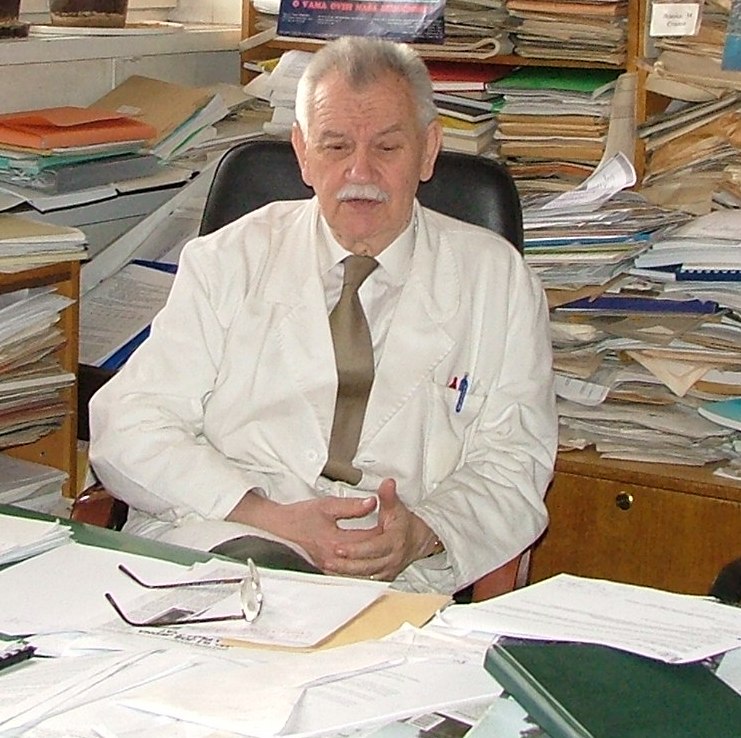 Marko Branica, internationally renowned marine chemist and former director of the Center for Marine and Environmental Research of the Ruđer Bošković Institute in Zagreb, passed away peacefully at his home in Zagreb, Croatia, on 17 November 2004 at the age of 73, after a brief period of failing health. He was very active in research and teaching at the Institute and at the University of Zagreb for almost 40 years, from the time he joined the Ruđer Bošković Institute in 1954 right up to his untimely death.

Marko Branica was born in Zagreb, Croatia, on 14 January 1931. He spent his entire career at the Ruđer Bošković Institute, which he joined in 1954, as a technician, before earning his BSc degree in chemistry (1956) at the Department of Chemistry, Faculty of Science, and University of Zagreb. He obtained his PhD from the same university in 1963, with a doctoral thesis entitled "Extraction of Inorganic Ions with Organic Solvents" under the supervision of the colloid chemist Professor Božo Težak. He advanced to the position of research associate (1963), senior research associate (1966) and senior scientist (1970, reelected in 1998). Branica was appointed adjunct associate professor (1967) and adjunct full professor (1997) at the Faculty of Science, University of Zagreb. In 1992 he was elected to the membership of the Academia Europaea, London and Academia Scientiarium et Artium Europaea, Salzburg. Marko Branica was awarded the Ruđer Bošković state award for science in 1982, the Heineken Prize for the Environment in 1992 and the National Life achievement Award for chemistry in 1996.

In his early years at the Ruđer Bošković Institute, Marko became interested in polarography and other electrochemical methods and organized the Laboratory for physicochemical separations around some early versions of electroanalytical equipment and a suite of young and enthusiastic collaborators, most of whom were only some years his juniors. In those years Branica became aware of the possibilities of applying electrochemistry to environmental analysis and speciation – indeed, he pursued these ideas throughout his scientific career and most of his more than 250 publications are focused on electrochemical approaches to aquatic research. Following his visions, in 1972 he founded a new department of the Ruđer Bošković Institute – the Center for Marine and Environmental Research. He became its first director and held this post for many years. Marko dedicated four decades of research to aquatic sciences, addressing the key issues and shaping the agenda in environmental electrochemistry. This was widely recognized by the international scientific community.

A digest of the impact of his research can be found in the citation of the Heineken Prize for the Environment, which he received in 1992 from the Royal Netherlands Academy of Arts and Sciences.
"Marko Branica has been awarded the prize in recognition of his pioneering research in the chemical analysis of various metal contaminants in the environment. He has had a decisive impact on environmental policy in the Mediterranean. As a young scientist at the Ruđer Bošković Institute, Branica helped develop methods of tracking uranium and related elements in the environment. Building on his previous research, he went on to the electrochemical analysis of various metal contaminants, such as copper, lead, cadmium and zinc. Branica’s work led to a breakthrough in the field of environmental chemistry: for the first time, low concentrations of metals in small volumes of fresh and sea water could be determined in laboratories without access to highly sophisticated and costly equipment. The laureate’s innovative methods have also made it possible to distinguish between the various inorganic and organic forms in which metals occur in the environment."

He published more than 250 papers in international scientific journals, nine patents and numerous scientific and technical reports. He lectured at many scientific conferences including the highly esteemed Gordon Research Conference (on chemical oceanography). In addition, he belonged to various scientific committees and to the editorial boards of several scientific journals. He also stimulated progress in the field of environmental management, especially in the Mediterranean. As a result of regulations drafted at the Barcelona Conference in 1972, in which all of the Mediterranean countries participated, metal contaminants in the Mediterranean have been monitored under the auspices of the United Nations Environmental Program.

Branica established very strong links between the Center for Marine and Environmental Research of the Ruđer Bošković Institute in Zagreb and the Institute of Chemistry of the Nuclear Research Center in Jülich, Germany. Cooperation started in the early 1970s with several postdoctoral students from Zagreb working with Professor Hans Wolfgang Nürnberg, another prominent electrochemist and the Jülich Chemistry Institute’s director. In the period from 1984 to 1996 (when the Chemistry Institute succumbed to organizational restructuring of the Research Center Jülich) Marko spent some 6 months every year in Jülich where he was offered the possibility to set up a "guest laboratory" and apply for German and international research funds. Most scientists from his Zagreb laboratory could do their research in the Jülich lab during research visits lasting from several weeks to several years, participating in two major projects implemented by the two laboratories: "Physical chemistry and distribution of chemicals in the aquatic environment" and "Radiocoulo-voltammetric characterization of trace metals in natural waters".

Branica’s lifelong motto was that the (Adriatic) sea was of paramount importance to Croatia and its future, and he understood that an effort must be made to provide appropriate education to coming generations of scientists. As early as in 1971, he organized a postgraduate course in Oceanography at the University of Zagreb. Marko was course director from the beginning and in 35 years of its existence, more than 200 students received their training and master degrees by taking this course. At that time, very few such courses – if any – existed in the Mediterranean region. Presently, the course is being reorganized into a doctoral curriculum at the University of Zagreb. Marko was an enthusiastic teacher – together with his staff he created lessons, gave instruction on various aspects of oceanography to students and began the process of establishing modern and top-level scientific research of the Adriatic Sea. He treated his students with high esteem.

Branica is known for bringing together scientists from different countries. Since 1970 he organized scientific meetings biennially, in a series of 14 meetings which became known as the Chemistry of the Mediterranean International Symposia. These conferences attracted attention of both young researchers and prominent scientists in a unique combination of high-level marine science and ample possibilities for discussion and social interaction between young and senior researchers, in a truly "summer school" atmosphere in the splendid settings of Rovinj and Primošten. The research papers presented at those conferences were published in special editions of international scientific journals (Thalassia Jugoslavica and Marine Chemistry), which were guestedited by Branica. These meetings had a significant influence on aquatic marine and environmental chemistry.

Marko Branica devoted much of his time to international advisory and organizational activities. He spent several months in Brazil and Peru, as an expert of the International Atomic Energy Agency (IAEA). On behalf of UNESCO, the UN Agency for Education, Science and Culture, he set up organizational plans for the Marine Research Institute in Athens, Greece (1978). Much of his energy was also devoted to activities of the International Commission for the Scientific Exploration of the Mediterranean Sea (Commission Internationale pour l’Exploration Scientifique de la Mer Mediterrannee – CIESM, with headquarters in Monaco). Over a period of 25 years, between 1970 and 1995, Marko presided in several terms over the Chemical Oceanography Committee of CIESM. When Croatia became a member of this organization in 1992, he became Croatia’s national delegate to CIESM and held this post to the end of his life. He chaired the organizing committee of the 35th CIESM Congress, held in 1998 in Dubrovnik, Croatia.

Branica had a very strong belief in human rights as well as in freedom and democracy. He was an advocate of public awareness of environmental issues and the necessity of public participation in decisionmaking processes concerning the environment. With his family, Marko enjoyed many activities, especially walking, swimming and traveling. He loved the nature and the sea. He knew how to enjoy the small things in life, also the good things life had to offer. He had a passion for gourmet food and imaginative cooking and was an authority on and advocate of Croatian wines, about which he seemed to know everything. His admiration for precious stones was shared by one of the authors of this obituary (GK) and many delightful hours were spent in mutual gemological deliberations. His firmness of purpose, wisdom, vision, uncompromising integrity and kindness were a great example to all who knew him. He has enriched the lives of many.

The atmosphere Marko projected around him was so magical that one immediately felt at ease and could talk about anything with him. He made people feel equal and included, and he always supported his friends and colleagues in a kind and gentle yet unswerving way. Marko had an unusually brilliant memory. He was well-read in history and classic literature, and was fond of music and art. A superb storyteller, Marko was famous for his paradoxes and witticisms. Even his scientific lectures were expressive and full of lyrical digressions. With his death, the Ruđer Bošković Institute has lost something of its luster.

Marko left a distinct mark on most of the things he did in science and life. Those who have had the privilege to know him and work with him have been able to expand the frontiers of marine science "by standing on the shoulders" of this extraordinary and prominent figure in science. He is and will be missed by numerous friends in various corners of the world, for years to come.