A significant enhancement of sodium ion conductivity in phosphate glasses by addition of WO3 and MoO3: the effect of mixed conventional–conditional glass-forming oxides 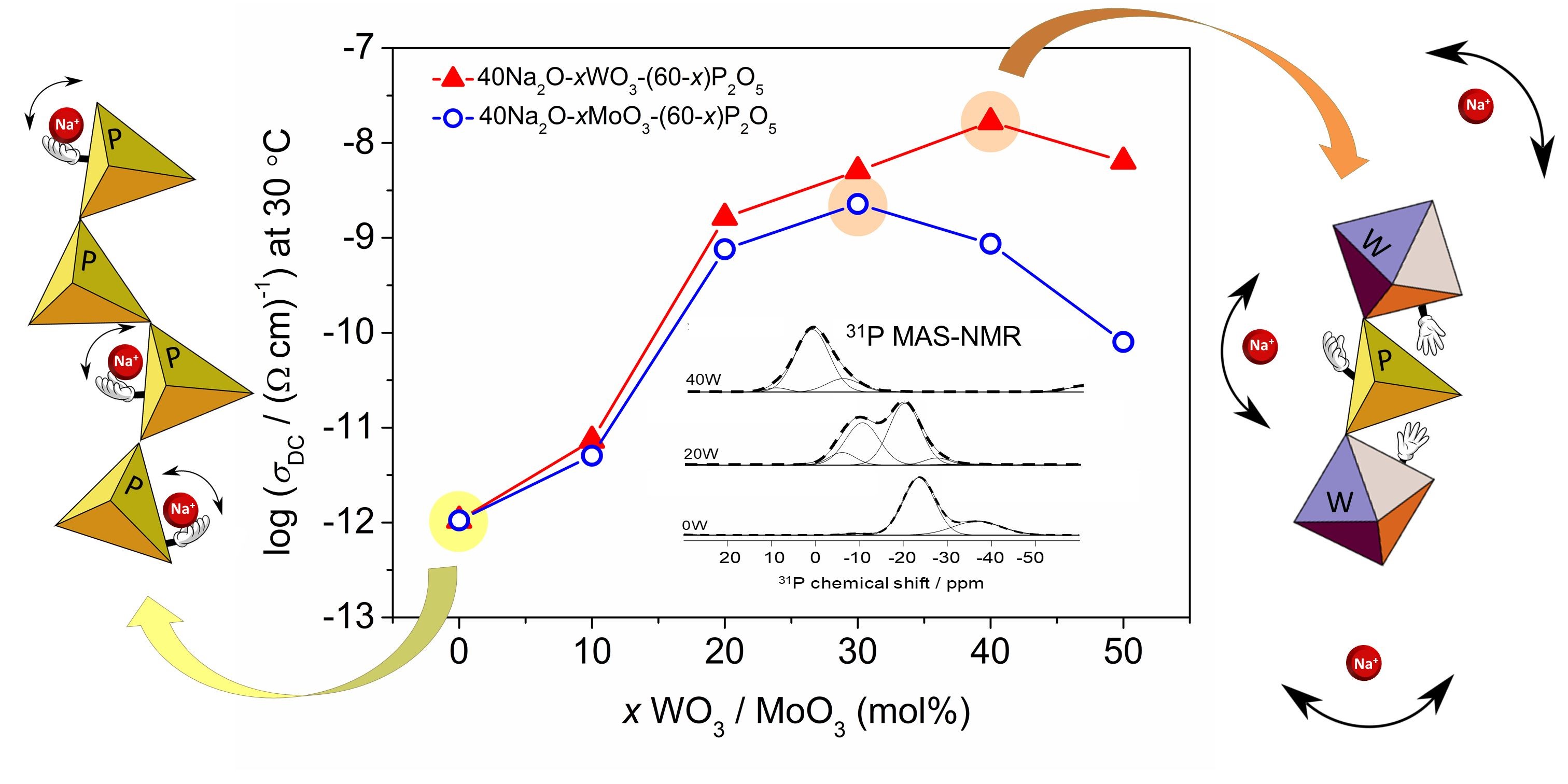 Scientists from Ruđer Bošković Institute, PhD student Sanja Renka, Dr. Luka Pavić, Prof. Andrea Moguš-Milanković and Dr. Ana Šantić, in collaboration with Dr. Grégory Tricot from the University of Lille and Prof. Petr Mošner and Prof. Ladislav Koudelka from the University of Pardubice have revealed how the addition of transition metal oxides WO3 and MoO3 significantly enhances the sodium-ion conductivity in phosphate glasses which extends the classical understanding of the mixed glass-former effect in glasses.

This study was conducted within the framework of POLAR-ION-GLASS IP-2018-01-5425 project supported by the Croatian Science Foundation and thr results of this study are published in the paper „A significant enhancement of sodium ion conductivity in phosphate glasses by addition of WO3 and MoO3: the effect of mixed conventional-conditional glass-forming oxides“ which has been selected as a 2021 HOT article in Physical Chemistry Chemical Physics (IF=3.430).

Ionically conducting oxide glasses belong to the class of materials that has been intensively studied over the last several decades due to their application as electrolyte materials in a wide range of electrochemical devices, solid-state batteries in particular. In comparison to their crystalline counterparts, glassy systems offer some major advantages which are mainly related to extreme compositional variability, and thus highly tuneable physical properties, good mechanical and chemical stability, absence of grain boundaries, isotropic properties and relative ease of preparation.

The ionic conductivity in these materials results from diffusion of mobile alkali or silver ions through the glass network and depends on their concentration and mobility, whereas the mobility itself is influenced by the attractive interactions of ions with anionic charge distribution of the structural units in the glass network. In other words, the ionic transport in oxide glasses is strongly coupled to their structural features. Such a strong dependence is at its best highlighted in the phenomenon known as the Mixed Glass Former Effect.

The literature reports that the ionic conductivity of many glass systems containing two or more glass-forming oxides such as P2O5, B2O3, GeO2 and SiO2 changes in a non-monotonic fashion, passing through a maximum, as one glass forming oxide is gradually substituted by the second one but the concentration of alkali ions is constant. The magnitude of the conductivity increase differs for different glass systems indicating that the origin of this phenomenon is related to the variations in structural arrangements of the network units.

In this study we have investigated changes in the electrical properties of sodium phosphate glasses induced by the addition of transition metal oxides WO3 and MoO3. Both of these oxides do not form glasses themselves but readily in combination with other conventional glass-forming oxides which classifies them as conditional glass-formers. The results show that the observed non-monotonic trend in conductivity with three and four orders of magnitude increase for glasses containing MoO3 and WO3, respectively is related to the facilitated transport of sodium ions in a similar manner to in the classical mixed glass-former effect.

A detailed analysis of structural features utilizing 31P MAS-NMR spectroscopy showed that this significant enhancement of ionic conductivity is related to the formation of mixed phosphate–tungstate and phosphate–molybdate units which facilitate the diffusion of Na+ ions through the glass network. These results reveal, for the first time, that the classical understanding of the mixed glass-former effect can be extended to the glass systems where the conventional glass-forming oxide is replaced by the conditional one. Moreover, the observed increase in conductivity for glasses containing WO3 is higher than any other reported enhancement in glasses exhibiting classical mixed glass-former effect.

The relevance of these results for practical application

The results of this study open new ways of improving and optimizing electrical properties of oxide glasses through/by relatively simple changes of composition and structure. While the obtained enhancement of sodium-ion conductivity by addition of transition metal oxides represents a significant step in development of glassy electrolytes, these results are also very relevant for development of materials with mixed ion-electron conductivity which are attractive for a wide range of applications in modern electrochemical devices.

Namely, the transition metal oxides such as WO3 and MoO3 can actively contribute to the charge transfer in glasses via transfer of electrons between transition metal ions of different valence states which leads to electronic (polaronic) conductivity. Although in this research the contribution of electronic conductivity is negligible due to a very low fraction of W5+ and Mo5+ ions, these results set directions for development of mixed ion-polaron glasses with tuneable contributions of ionic and polaronic conductivities. This property is highly important for application of glasses as electrode materials in solid-state batteries since both types of conductivity have important role in fast and efficient electrical transport in electrode.

A significant enhancement of sodium ion conductivity in phosphate glasses by addition of WO3 and MoO3: the effect of mixed conventional–conditional glass-forming oxides