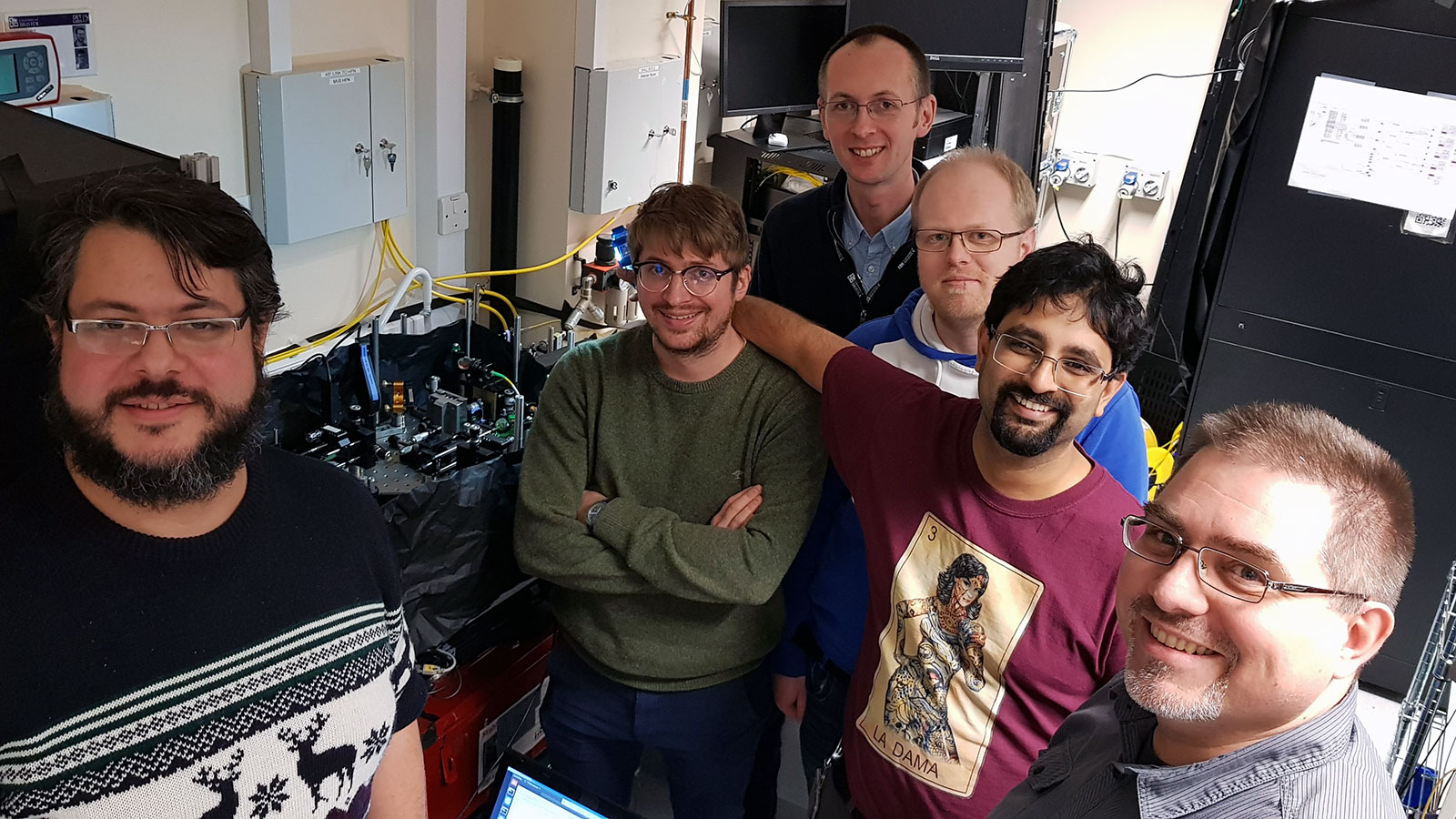 Martin Lončarić and part of the QNET team

The world is one step closer to having a totally secure internet and an answer to the growing threat of cyber-attacks, thanks to a team of international scientists who have created a unique prototype which could transform how we communicate.  Scientists from the Photonics and Quantum Optics Laboratory of the Ruđer Bošković Institute (RBI) were integral to this international effort.

"The Croatian part of the team contributed to the research by designing and manufacturing optical receivers - the user part of the communication equipment in the quantum network." - explains Dr Martin Lončarić, one of the authors and research associate in the RBI Laboratory for Photonics and Quantum Optics who participated in this research together with Dr Mario Stipčević, Head of the RBI Scientific Centre of Excellence for Advanced Materials and Sensing Devices (CEMS) and the Photonics and Quantum Optics Laboratory, as well as Željko Samec, member of CEMS and technician in the Workshop of the RBI Division of Physical Chemistry (DPC). Namely, the key instruments and devices for conducting the experiment were made by the employees of the DPC Workshop.

The invention led by the University of Bristol, revealed today in the journal Science Advances, has the potential to serve millions of users and is understood to be the largest-ever quantum network of its kind, presenting exciting opportunities in internet-led times accelerated by the COVID-19 pandemic.

By deploying a new technique, harnessing the simple laws of physics, it can make messages completely safe (form interception) while also overcoming major challenges which have previously limited advances in this little used but much-hyped technology.

Lead author Dr Siddarth Joshi, who headed the project at the university’s Quantum Engineering Technology (QET) Labs, said: “This represents a massive breakthrough and makes the quantum internet a much more realistic proposition. Until now, building a quantum network has entailed huge cost, time, and resource, as well as often compromising on its security which defeats the whole purpose”.

“Our solution is scalable, relatively cheap and, most important of all, impregnable. That means it’s an exciting game changer and paves the way for much more rapid development and widespread rollout of this technology.” 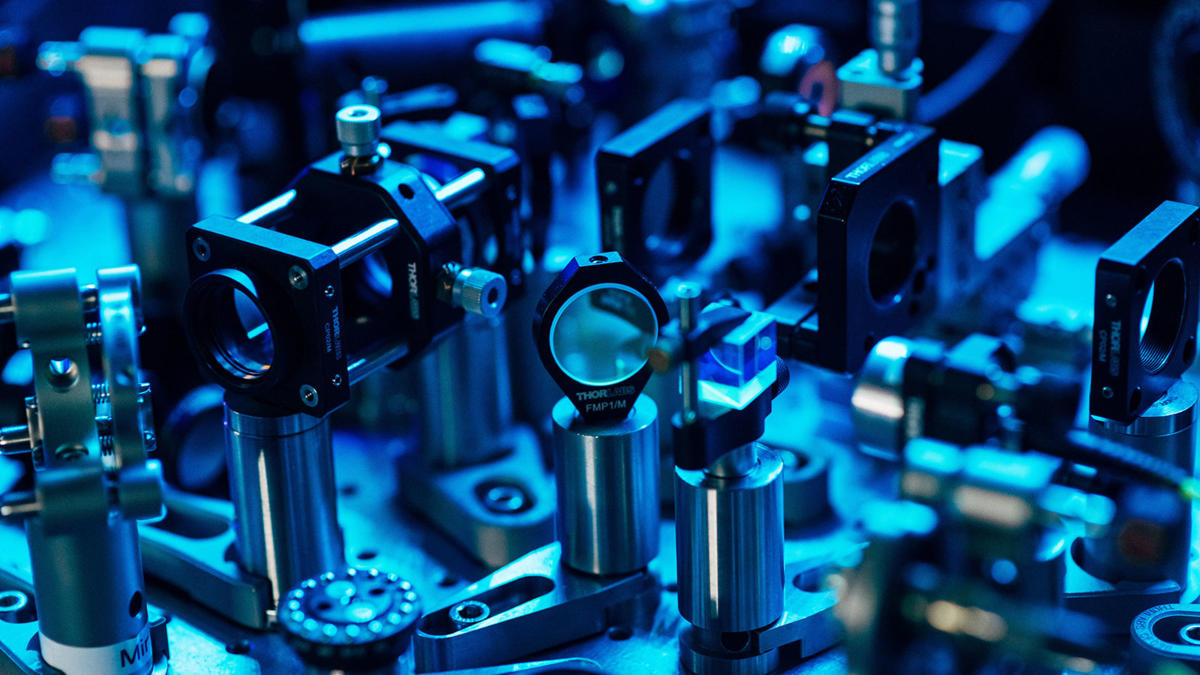 The current internet relies on complex codes to protect information, but hackers are increasingly adept at outsmarting such systems leading to cyber-attacks across the world which cause major privacy breaches and fraud running into trillions of pounds annually. With such costs projected to rise dramatically, the case for finding an alternative is even more compelling and quantum has for decades been hailed as the revolutionary replacement to standard encryption techniques.

So far physicists have developed a form of secure encryption, known as quantum key distribution, in which particles of light, called photons, are transmitted. The process allows two parties to share, without risk of interception, a secret key used to encrypt and decrypt information. But to date this technique has only been effective between two users.

“Until now efforts to expand the network have involved vast infrastructure and a system which requires the creation of another transmitter and receiver for every additional user. Sharing messages in this way, known as trusted nodes, is just not good enough because it uses so much extra hardware which could leak and would no longer be totally secure,” Dr Joshi said.

“Instead of having to replicate the whole communication systems, this latest methodology, called multiplexing, splits the light particles, emitted by a single system, so they can be received by multiple users efficiently,” Dr Joshi said.

The team created a network for eight users using just eight receiver boxes, whereas the former method would need the number of users multiplied many times – in this case, amounting to 56 boxes. As the user numbers grow, the logistics become increasingly unviable – for instance 100 users would take 9,900 such boxes.

To demonstrate its functionality across distance, the receiver boxes were connected to optical fibres via different locations across Bristol and the ability to transmit messages via quantum communication was tested using the city’s existing optical fibre network.

“Besides being completely secure, the beauty of this new technique is its streamline agility, which requires minimal hardware because it integrates with existing technology,” Dr Joshi said.

Whereas previous quantum systems have taken years to build, at a cost of millions or even billions of pounds, this network was created within months for less than £300,000 The financial advantages grow as the network expands, so while 100 users on previous quantum systems might cost in the region of £5 billion, Dr Joshi believes multiplexing technology could slash that to around £4.5 million, less than 1 per cent.

In recent years quantum cryptography has been successfully used to protect transactions between banking centres in China and secure votes at a Swiss election. Yet its wider application has been held back by the sheer scale of resources and costs involved.

“With these economies of scale, the prospect of a quantum internet for universal usage is much less far-fetched. We have proved the concept and by further refining our multiplexing methods to optimise and share resources in the network, we could be looking at serving not just hundreds or thousands, but potentially millions of users in the not too distant future,” Dr Joshi said.

“The ramifications of the COVID-19 pandemic have not only shown importance and potential of the internet, and our growing dependence on it, but also how its absolute security is paramount. Multiplexing entanglement could hold the vital key to making this security a much-needed reality.”

The research received funding from the Quantum Communications Hubs of the Engineering and Physical Science Research Council (EPSRC), Ministry of Science and Education (MSE) of Croatia, and the Austrian Research Promotion Agency (FFG). Collaborating with the University of Bristol, UK are Croatia’s Ruder Boskovic Institute (RBI) in Zagreb, Austria’s Institute for Quantum Optics and Quantum Information (IQOQI), in Vienna, China’s National University of Defence Technology (NUDT) in Changsha and UK’s University of Leeds.

DISCLAIMER - The contents of this news are the sole responsibility of RBI PR Office and can under no circumstances be regarded as reflecting the position of the EU.

Are researchers one step closer to developing the theory of impulse circuits?