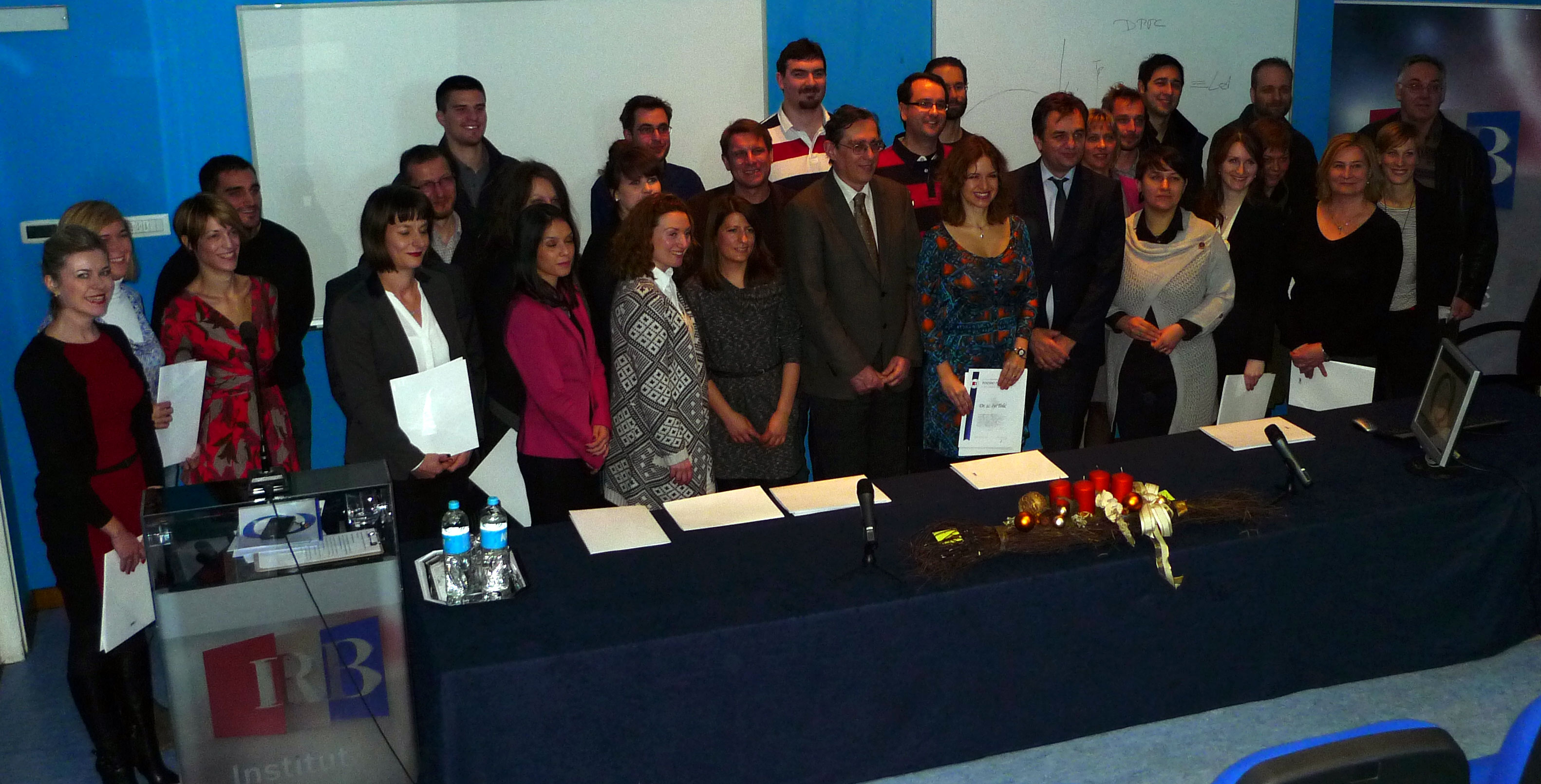 Today forty RBI scientists received Annual Awards at the Special Ceremony held at the Ruđer Bošković Institute. The awards were presented to scientists for the best scientific papers published in 2013 and 2014. Besides RBI Annual Awards, Certificates of Appreciation were awarded to Prof. Ana Sunčana Smith and Prof. Iva Tolić for their significant contribution to scientific excellence and international reputation of the Institute.

The awards were presented as part of the formal session of the RBI Scientific Council (SC), chaired by the Miroslav Plohl, the RBI SC president.

At the closing ceremony, the RBI Director General Tome Antičić sincerely thanked and congratulated all the awardees. Moreover, he took this opportunity to recall of the other successes of the RBI scientists which marked the year 2015, such as 6 million euros worth HORIZON 2020 projects. ''This means that with the capacity of six percent of the total number of scientists in Croatia, which Ruđer Bošković Institute employs, our Institute pulled almost 60 percent of the total funds raised by all scientific institutions in Croatia.'' - stated Antičić.

In addition to this in 2015, the RBI scientists were also granted  a total of thirty projects by the Croatian Science Foundation (Hrzz) worth more than 3 million euros, while they pulled another million from the Structural Funds. Moreover, these ESF projects will enable RBI to recruit and educate about thirty young researchers.

If one adds other EU projects to this calculation, then one gets a sum of nearly 20 million euros that Ruđer Bošković Institute pulled from the European funds since the EU started implementing funding programs, i.e. since 2007.

The RBI Director General particular referred to two prestigious projects of the European Research Council (ERC) worth over 3.5 million euros, awarded to two remarkable scientists Iva Tolic and Ana S. Smith. Thanks to these ERC grants the two scientists founded their research groups at RBI, hired young researchers and equipped laboratories to work on research that will contribute to the future development of new drugs and therapies.

However, there is more to this story. Namely, over the next 2 or 3 years the Institute is expecting almost 60 million euros due to structural project 'Open scientific infrastructure platform for innovative applications in the economy and society' (O-zip).

The main goal of O-ZIP is upgrading and unzipping of the RBI intellectual property, capital equipment and know how, while increasing the RBI impact in the ERA and boosting cooperation between scientific, academic and business sector. O-ZIP will provide development platform for start-up labs, SMEs and innovation incubators. This project will be a game changer for Croatian science, innovation and technology.

Besides, scientific excellence, expertise, infrastructure, and a reference in the number of the EU projects, one of the key reasons why RBI got some extremely competitive projects, said Antičić, lies in the fact that RBI took special effort to implement a series of measures aimed at strengthening excellence, in order to create conditions equal to some of the best of western scientific institutions.

‘’Among many other actions, the RBI management implemented new organization structure, new improved rules and regulations on scientific promotion which now take account of international projects, patents and cooperation with the business sector, regulations on the management of premises and equipment, as well as detailed and extensive evaluation and restructuring of laboratories in order to encourage the best among us.

And today we have indeed awarded the best among us in 2013 and 2014, as based on the decision of the Scientific Council. Once again please accept my sincere thanks and deep appreciation for you contribution!’’ – concluded Antičić.

RBI presents Annual Awards to the excellent scientists for the best papers as part of a strategy for the direct promotion of excellence, creativity and innovation, which should have a long-term impact on creating an effective and supportive environment that will stimulate competitiveness.