The RBI scientists of the Division of Physical Chemistry Krunoslav Užarević and Marina Juribašić Kulcsar published the paper in Chemistry - A European Journal (IF 5.696) in collaboration with their colleagues from the Zagreb Faculty of Science (PMF) and the Chemical Institute in Ljubljana (KI). The editors classified their paper as a 'hot paper' and published it on the cover of this reputable journal. 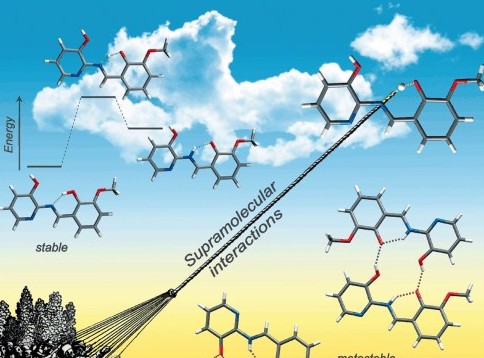 The paper 'Supramolecular Stabilization of Metastable Tautomers in Solution and the Solid State'  made under the leadership of the two RBI scientists, in collaboration with their colleagues Nikola Bregovic (PMF), Vladimir Stilinović (PMF), prof. Vladislav Tomišić (PMF), prof. Marina Cindrić (PMF), Primož Šket (KI), prof. Janez Plavec (KI) and Mirta Rubčić (PMF) deals with the tautomerism in the solid state, the field which has been widely investigated in the development of new materials and new-generation drugs.

This work presents a successful application of a recently reported supramolecular strategy for stabilization of metastable tautomers in cocrystals to monocomponent, non-heterocyclic, tautomeric solids. Quantum-chemical computations and solution studies show that the investigated Schiff base molecule, derived from 3-methoxysalicylaldehyde and 2-amino-3-hydroxypyridine (ap), is far more stable as the enol tautomer.

In the solid state, however, in all three obtained polymorphic forms it exists solely as the keto tautomer, in each case stabilized by an unexpected hydrogen-bonding pattern. Computations have shown that hydrogen bonding of the investigated Schiff base with suitable molecules shifts the tautomeric equilibrium to the less stable keto form.

The extremes to which supramolecular stabilization can lead are demonstrated by the two polymorphs of molecular complexes of the Schiff base with ap. The molecules of both constituents of molecular complexes are present as metastable tautomers (keto anion and protonated pyridine, respectively), which stabilize each other through a very strong hydrogen bond. All the obtained solid forms proved stable in various solid-state and solvent-mediated methods used to establish their relative thermodynamic stabilities and possible interconversion conditions.

Hot Papers are chosen by the Editors due to their importance in a rapidly evolving field of high current interest.

Chemistry - A European Journal has established itself as a truly international journal with top quality contributions (2013 ISI Impact Factor 5.696). It is the international forum for the publication of outstanding Communications and Full Papers from all areas of chemistry and related fields.