On Wednesday, October 27th Her excellency, Beverley Mercer gave the first lecture in the Embassy Series sponsored by the Ruđer Bošković Institute. The lecture was given in the auditorium of the Croatian Chamber of Economy to an audience of scientific, business and diplomatic leaders and highlighted Australian science and the possibilities of cooperation with the Republic of Croatia. 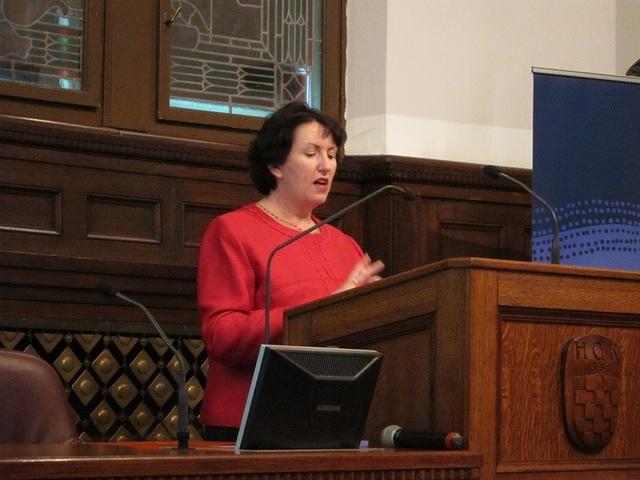 In her address Ambassador Mercer highlighted the fact that Croatia and Australia while being physically distant countries, had many similarities such as a long coastline, a variety of marine environments, a dependence on development of tourism and agriculture, an aging population as well as significant contributions to world science not commonly appreciated by the general public.

Ambassador Mercer emphasized the successful cooperation between the Ruđer Bošković Institute and the Australian Research Centre for Excellence for Free Radical Chemistry and Biotechnology, cooperation between the Children's Hospital in Zagreb and the University of Sydney in the treatment of stuttering in early childhood, as well as cooperation between scientists in the two countries on the potential use of anti-microbial peptides and novel antibiotic development.

Ambassador Mercer further spoke about the fact that Australia, while having a relatively small population, had been home to eleven Nobel laureates, and contributes 3% of the total number of scientific publications in the world.

Australia invests 15 billion dolars annually in scientific research which represents more than 2% of its BDP and in 2009 initiated an innovation program for the 21st century entitled Powering Ideas. This program defines seven national innovatioon priorities and the program will be followed with an increase in science spending to 3.1 billiono dollars in the next four years.

International scientific collaboration is a particular priority of the Australian government, and relations with European Union countries is among the most important in this respect. Through the European Cooperation in Science and Technology (COST) program, of which Croatia is also a member, Australia participates in numerous collaboratioons with other European nations.

Ambassador Mercer also presented Australia's largest scientific project, the Square Kilometer Array (SKA) which is being developed in cooperationo with New Zealand. The SKA is a large radio telescope which will be used to study the origins of the universe and is composed of a central cluster of several thousand antenna as well as several thousand more antenna placed within an area of three to five thousand kilometers.

The aim of the Embassy Series sponsored by the Ruđer Bošković Institute is to give accredited ambassadors in the Republic of Croatia a platform where they can speak on the science and technology programs in their respective countries with particular emphasis on scientific institutions and science based industries. The Embassy Series will greatly contribute to the exchange of ideas and experiences and foster greater cooperation between Croatia and those countries who see science and education as the cornerstones for development of modern technologies which will ultimately act as initiators of economic developemnt.