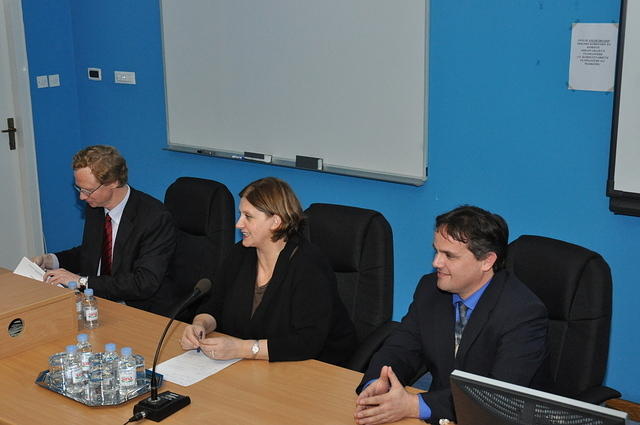 The second lecture in the Embassy Series entitled an Overview of the Austrian Research System was given yesterday by H.E. Jan Kickert, Austrian ambassador to the Republic of Croatia and Dr. Miroslav Polzer, chairman of the Austrian office for cooperation in science and technology in Ljubljana. The lecture gave an overview of the science and technology policies of Austria and various Austrian programs in this context.

Ambassador Kickert and Dr. Polzer emphasized that the promotion and utilization of new knowledge is of vital importance to the Republic of Austria, and that research and development in a knowledge based society is the major generative force in achieving competitiveness, economic growth and full employment. They pointed out that the Republic of Austria plans to increase its funding of research and development from the current 2.76% of GDP (totaling 7,8 billion euros) to 3.75% of GDP by the year 2020 with the aim of strengthening and positioning Austria as an "innovation leader".

In achieving these goals they pointed out as methods the promotion of excellence in research, strengthening ties between universities and industry, strengthening European and international scientific collaborations, mobility and networking, financing of national research programs that are complementary to those of the European Union, and protection of the innovation system with special emphasis on young investigators.

The lecture served as a platform to present the formation of the Institute of Science and Technology IST-Austria, a new national campus devoted to fundamental research and undergraduate education. The IST campus was initiated in 2002, is located on the outskirts of Vienna and covers 180.000 square metres. It is planned that by 2016 the campus will be an internationally recognized multidisciplinary research centre with between 40 and 50 research groups.

Particular emphasis was drawn to the successes of bilateral cooperation between the Republic of Austria and the Republic of Croatia and the planned hosting of the fourth Austro-Croatian research day in the spring of 2011. The successful collaboration between RBI and the Joanneum Research centre in Graz was also noted in the context of forming a research cluster in the Alpe-Adriatic-Pannonia region, as well as individual collaborations in the areas of nanotechnology, environmental protection and biomedicine.

The Embassy Series sponsored by the RBI was initiated with the aim of exchanging ideas and fostering collaborations between the Republic of Croatia and those countries who believe that science and education and the development of high technologies is the driving force for betterment of modern societies.