We cordially invite you to attend a lecture by the Ambassador of the People's Republic of China, H. E. Shen Zhifei, entitled "Scientific Innovation Is the Only Way to Realize Sustainable Development", to be held on Wednesday, November 23, 2011, at 4 p.m., in the Auditorium of Wing III of the Ruđer Bošković Institute, Bijenička 54. 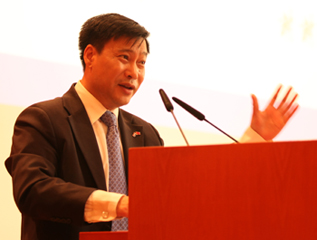 China is on its way to overtaking the United States in scientific output by 2013, according to a major study conducted by the Royal Society, the UK's national science academy.  Whereas the United States published ten times more scientific papers than China in 2006, by the year 2008 this difference was reduced by eight-fold. The country that produced inventions such as the compass, gunpowder and printing is preparing for an important return to the global scientific stage.

How was China able to become second only to the United States as the world's largest producer of knowledge in such a short time? What kind of scientific system does China have? What affected the significant increase in scientific productivity? What are China's innovative policy and strategy? How is China collaborating with the countries of the EU and what kind of cooperation does it have with the Republic of Croatia?

The ambassador will present his lecture within the framework of the Embassy Series Sponsored by theRBI, which was initiated for the purpose of exchanging ideas and improving Croatian cooperation with countries for which science and education are the foundations for the development of high technologies, as driving forces for the economic prosperity of modern societies..