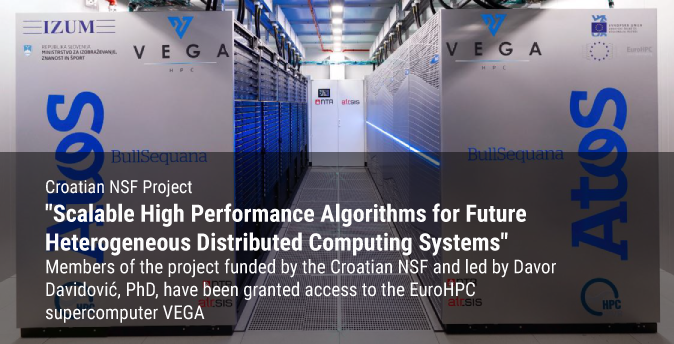 10 January 2022 - Members of the project "Scalable High Performance Algorithms for Future Heterogeneous Distributed Computing Systems", funded by the Croatian NSF and led by Davor Davidović, PhD (Ruđer Bošković Institute / Centre for informatics and computing), have been granted access to the EuroHPC supercomputer VEGA, located at the Institute of Information Sciences - IZUM in Maribor, Slovenia. Access to the supercomputer was granted through the EuroHPC JU Benchmark and Development Calls.

The supercomputer, VEGA, consists of 960 compute nodes with a total of 122,000 compute cores and 240 Nvidia GPUs connected via a fast InfiniBand link, and can perform 6.9 peta (10^15) compute operations per second. The research group was granted access for a period of one year, with the possibility of an extension for a further year. The granted resources include 384,000 core hours and access to 60 compute nodes with a total of 120 AMD Epyc processors (7680 cores) and 240 Nvidia A100 graphics processors for advanced scientific computing.

The granted resources will be used for the development of new algorithms and methods for solving eigenvalue problems and matrix factorisations (QR factorization) on GPUs, which form the basis for many advanced scientific computation codes and libraries. The main goal of the research is to develop new tools that are able to solve very large matrix problems using the computing power of both distributed CPUs and GPUs.