P-Limit and LEE at the 11th International Phycological Congress in Szczecin, Poland.

Nataša Kužat will present the talk:

The northern Adriatic is characterized by a multitude of steep and quickly changing gradients (e.g. nutrients), both temporal and spatial. The current systems and the major freshwater input (River Po) in particular generate strong gradients in nutrient concentrations with an expressed N/P imbalance and sustained phosphate limitation. This results in a highly structured planktonic ecosystem that allows for a high level of sympatric congeneric species diversity. We analyzed several such sympatric congeneric species with respect to their metabolic reaction towards phosphate limitation. Here we report data on species specific growth rates under different nutrient regimes, phosphate uptake rates, alkaline phosphatase activity, localization and activation patterns and characteristics of alkaline phosphatase activity. Our results demonstrate a highi nterspecific variation in metabolic responses to phosphate limitation in sympatric congeneric species. The ecological significance and function appears hence to be defined on species level and appears far from homogeneous within genera.

EXPLORING THE STRUCTURE OF A PLANKTONIC ECOSYSTEM

The northern Adriatic is a very convenient ecosystem to observe phytoplankton under a variety of different conditions. Steep gradients of nutrient concentration/availability in this shallow basin allow the observation of the very same species under changing nutrient regimes on small temporal and spatial scales. After studying the in situ behavior of marine phytoplankton along the aforementioned gradients, we set out and isolated key species for in vitro experiments, where we analyzed their reactions to contrasting nutrient regimes. An imbalanced N/P ration in the basin and a resulting overall phosphate limitation appear to be a major driver and determining factor of the ecosystem. The reaction of key species to phosphate limitation and the resulting efficiency in niche formation and competition for ecological niches explain most of the in situ observations regarding abundance and spatio-temporal distribution of phytoplankton species. This study shows that in vitro characterization of phytoplankton species metabolic capabilities allows the prediction of their relative performance in in situ competition for resources.

SKELETONEMA GREVILLEI, A REGULAR AND BLOOM FORMING DIATOM IN THE COASTAL WATERS OF THE ADRIATIC SEA

Skeletonema grevillei Sarno et Zingone was described in 2005. from the original type material. Cells were delicate, 4–7.5 μm in diameter, and formed short colonies. The fultoportulae processes in the terminal valves were open tubes having narrow tips with truncated or spiny margins. In the intercalary valves, they formed knuckle-like generally 1:1 junctions. A scallop-work of silica bridges joined the bases of the processes. Type locality for this species is Hong Kong bay, and several other authors report this species in Japan, Australia and Muscat Oman. Skeletonema grevillei Sarno and Zingone was observed for the first time in the Adriatic Sea in 2014 during the autumn bloom when it reached high abundances (5.4 x 106 cells / L). The bloom started in september with the peak in november/december and lasted until january/february. The highest abundances were found in the surface layer from 0-10 m depth. We observed colonies from 3-26 cells in both cultures and natural samples. The valve face was slightly convex, and the pervalvar axis is generally longer than or as long as the cell diameter. The cell diameter was from 5-19 μm. The IFPPs are rather long (8.5 ± 1.6 μm n=13), each joining one IFPP of the adjacent cells (1:1 junction), with a thickening at the joint. We here report in situ observations forS. grevilleiwith additional information on their morphological and genetic characteristics as well as ecology.

LEE at the DNAquaNet Kickoff meeting in Essen (Germany) 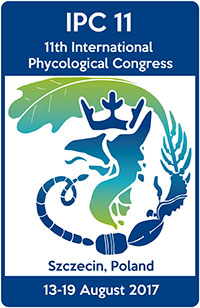