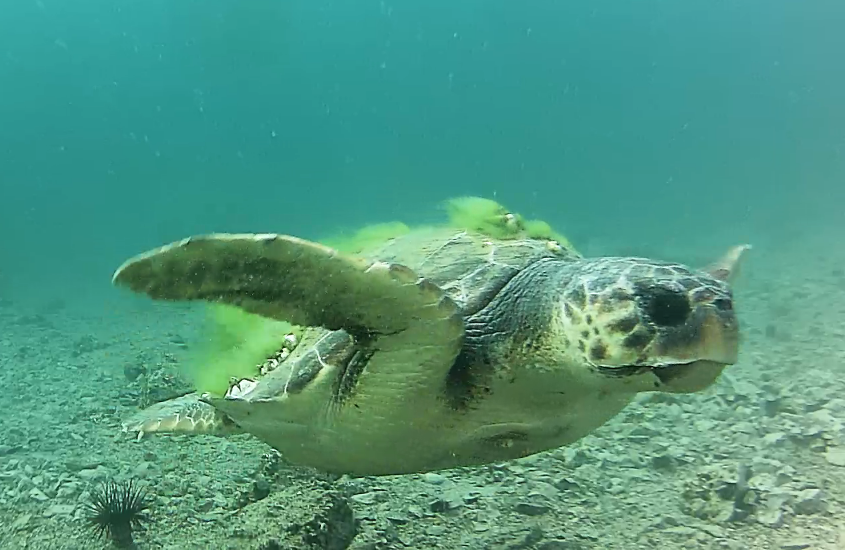 Scientists of the Ruđer Bošković Institute (RBI) Dr Nina Marn and Dr Tin Klanjšček, together with assistant professor Marko Jusup of the Japanese Tokyo Institute of Technology and Prof Dr SALM Kooijman of the Dutch Vrije Universiteit Amsterdam, presented the first mechanistic model for quantifying the effects of ingested plastics on individuals and populations of sea turtles. Results of their research are published in a high ranking scientific journal ‘Ecology Letters’.

Annually, around ten million tonnes of waste finds its way into the world's seas and oceans. Mostly this is plastic waste, which not only stays in the environment for a long time, but also continuously exerts negative effects on it. Aside from financial losses, plastics in the open and coastal seas also jeopardize the health of marine plants and animals, affecting directly and indirectly human health and economy.

Marine wildlife most frequently interacts with plastics by ingesting smaller pieces and becoming entangled with larger pieces. Almost 700 marine species have been documented to interact with plastics.

Among the most affected species are sea turtles, and all seven known species of sea turtles have been shown to be seriously negatively impacted by the presence of plastics in marine ecosystems.

Plastics ingestion is often not lethal for sea turtles, but it does reduce their ability to feed, and can cause negative toxic effects. Scientists have been warning for over a decade about the negative sublethal effects of ingested plastics, noting that these effects are 'particularly difficult to quantify'.

The success of the RBI team and their collaborators is in achieving exactly this, what others have struggled to accomplish. Namely, they have developed a new approach to assess and quantify the effects of plastics ingestion on the ontogeny and growth of individuals, and consequently populations.

''Plastics in marine ecosystems is a burning international problem and is the research focus of leading scientific groups across the globe. Even though we already know a lot about the impacts of plastics on marine ecosystems, gathering reliable data on direct effects of (macro- and micro-) plastics on animal health is still a challenge for the scientific community. Over the past few years there have been frequent discussions about vast amounts of plastics ending up in the oceans, and I have observed more and more plastics also in the Adriatic Sea. One of the main motivations of my PhD-research was therefore to explore and link the marine plastics to its effects on the marine wildlife, particularly on the already endangered sea turtles,'' explains Dr Nina Marn, who is a postdoctoral researcher in the RBI Laboratory for informatics and environmental modelling, and is together with Dr Jusup the leading authors of the publication. 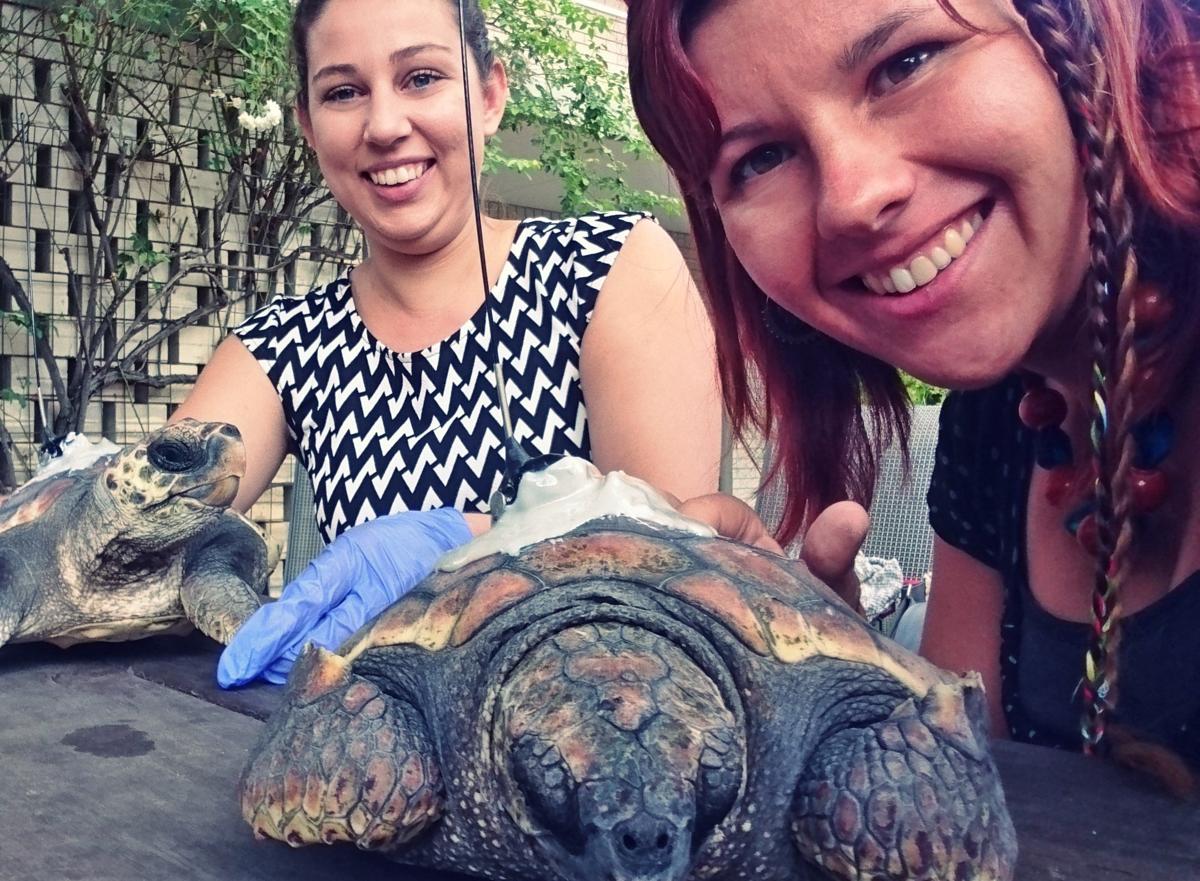 Understanding the link between the amount of ingested plastics and the reduction in feeding of marine wildlife is crucial for understanding and mitigating the negative effects of plastics on marine organisms.

''In this research, we focused on a well-known and globally distributed protected species of sea turtles – the loggerhead. Our aim was to quantify the effects of ingested plastics on individual animals, and subsequently on a whole population. We achieved that by developing a mechanistic model that links the amount of ingested plastics to the reduced energy intake by an individual, which links to physiological effects on that individual, and then consequently affects the whole population.

The reason why differentiating between the two breaking-points is important, is that the individuals can look healthy and even reproduce, but the reproduction in not sufficient to offset the loss of individuals (due to mortality etc.) in that population.

We found that the negative effects of (average) plastics ingestion are currently not critical for the survival of loggerhead turtles. However, more extreme cases of ingestion reported in the scientific literature do cause the population ecological breaking-point to be reached. This is why it is crucial to decisively act now before it is too late,'' says Dr Marko Jusup.

The model for quantifying the effects of plastics ingestion on marine wildlife, developed by our scientists, is a powerful tool for assessing the current state of marine ecosystems and planning further protection measures.

An added value of this model is its wide applicability -- not only to other sea turtles, but to any of the over 2000 animal species characterized in the online database called ‘Add-my-Pet’. The database is a brain-child of Prof Dr SALM Kooijman, and is maintained and updated by a scientific collaborative effort in which Dr Nina Marn participates.

''The effects of plastics ingestion that we are focusing on are not the only sublethal effects of ingested plastics; for example, there is also a toxicological aspect of (micro) plastics which is something we do not characterize at this point. However, our model is a crucial step which brings us closer to a more complete understanding of the effects of plastics on marine organisms. A general approach such as this, combined with an extensive database, enables straight-forward applications of our model to other organisms such as sea birds and sea mammals,'' concludes Dr Tin Klanjšček, a corresponding author and a Head of the RBI Laboratory for informatics and environmental modelling. 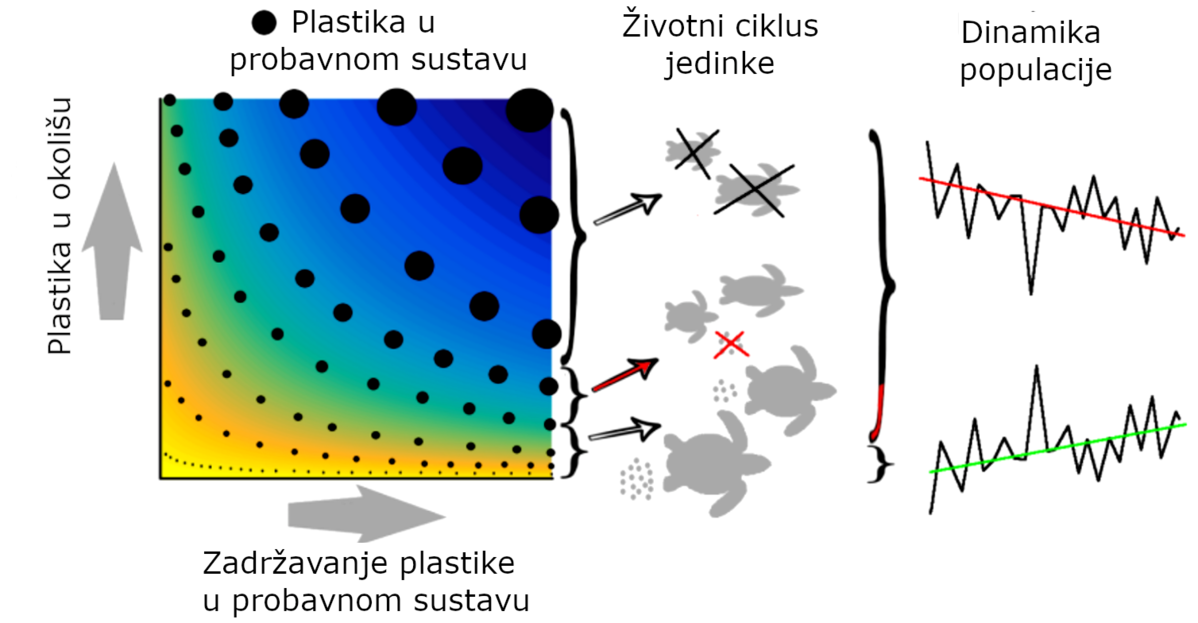 Figure: Mechanistic framework for quantifying the effects of ingested plastics on marine organisms (presented for sea turtles): 1. Amount of plastics in digestive contents is a result of two factors (a) amount of plastics in the environment, and (b) residence time of ingested plastics – the more plastics in the environment, and the longer it stays in an organism, the more plastics are present in the digestive contents of an individual turtle at any given time. 2. Ontogeny of an individual will depend on the amount of plastics in the digestive contents, because more plastics results in less energy available for physiological processes of maturation, growth, and reproduction. In one extreme, turtles will die from ingesting too much plastics, and in the other extreme when only a small amount of plastics is present, the effects may not even be directly observable. However, a range of intermediate cases exist in which individuals survive but do not have enough energy to reproduce (having reached their individual ecological breaking-point), or do reproduce but reproduce less. 3. Life cycle of individuals, and especially the reproduction, will directly affect the population dynamics.

A population will grow only if enough individuals reproduce enough to offset mortality losses within a population. In all other cases, even when individuals are reproducing but less, a population will shrink (what we call the population ecological breaking point). Considering that population-level changes can usually be observed only after several years or even decades, model such as this one – that enables us to predict trends based on currently available data – are extremely important and useful for timely and efficient wildlife management.

Anoxia in the Rogoznica Lake