The latest study was ranked among the top five percent publications in the field, thus earning a VIP status, and a journal cover! 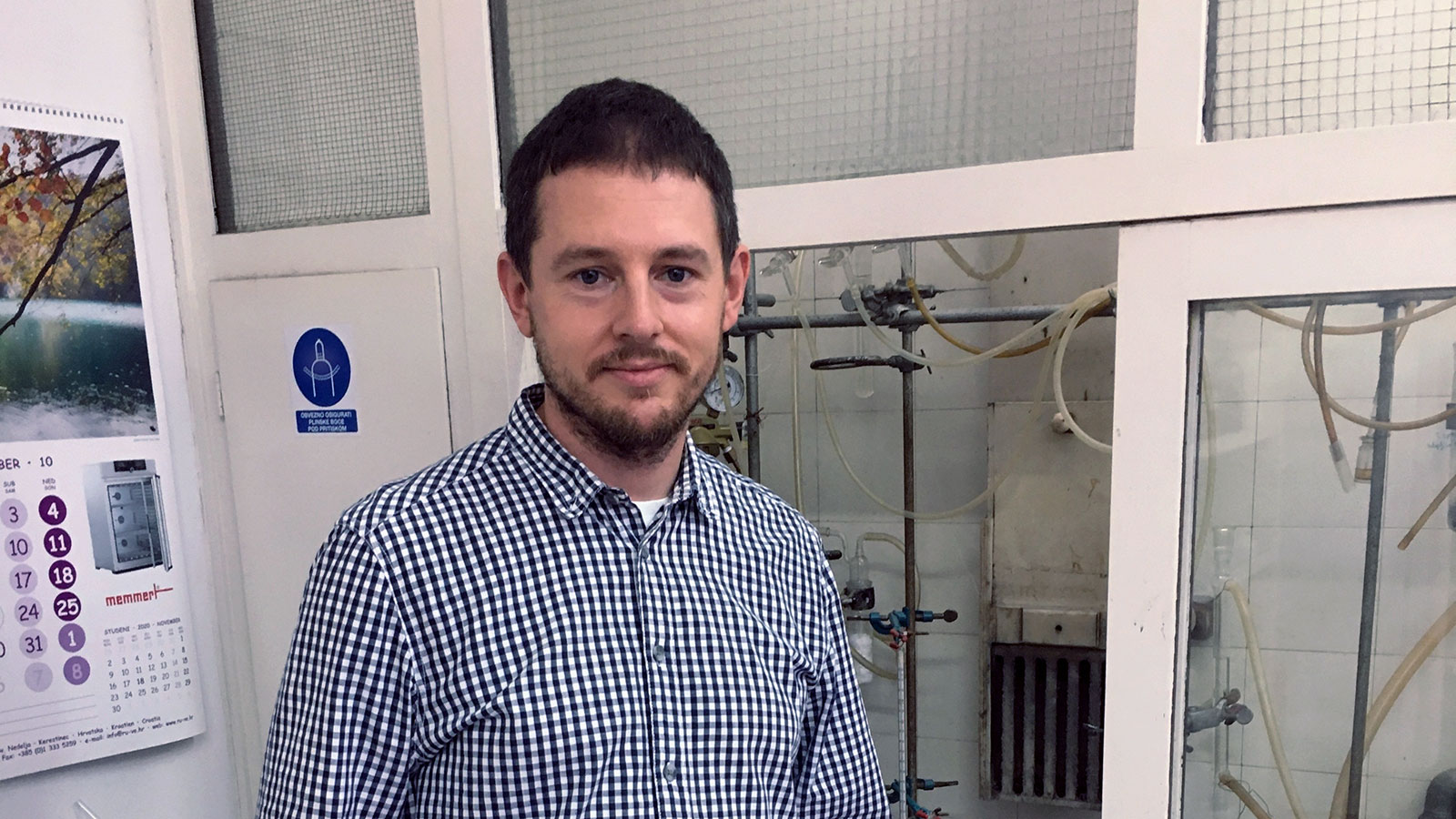 Despite significant methodological and technological advancements in chemical recycling of synthetic polymers, an effective mechanochemical PET degradation has not yet been described in the scientific literature, until now! Vjekoslav Štrukil from the Ruđer Bošković Institute (RBI), Zagreb, Croatia, found that the challenging breakdown of waste PET under ambient conditions of temperature and pressure can be achieved by mechanochemical ball milling or vapor-assisted aging.

These results were published in the prestigious journal ChemSusChem and thanks to the remarkable reviews, the paper was ranked among the top five percent publications in the field, thus earning a Very Important Paper (VIP) status. Furthermore, the editorial board featured this study on its cover.

Plastic pollution has become one of the most complex environmental issues, especially in the context of increasing production and demand for plastic materials. While innovations in polymer chemistry have radically changed our lives in the mid-20th century, the outstanding properties of plastics such as durability, chemical stability, strength and many other pose a serious problem when such materials are to be recycled.

According to some estimates, by the year 2050 there will be more plastic waste than fish in oceans by total weight, with the annual production of plastic materials reaching more than 1.1 billion tonnes.

Global production of plastics in 2015 was estimated to approximately 380 million tonnes, and the cumulative amount of waste generated from 1950s until 2015 was around 6.3 billion tonnes.

Only 9 % of the waste was recycled and a staggering 60 % of all plastics ever made ended up in the environment. Rationalizing the use of plastic products and increasing the consumer awareness to sort and recycle waste is important in terms of pollution reduction. However, finding technical solutions and methodologies to more efficiently process plastic waste and transform it into valuable chemicals still poses a great challenge to researchers around the world.

Polyethylene terephthalate (PET) is a synthetic polyester widely used in the production of soft-drink bottles and textile fibres. PET is a thermoplastic made of repeating units of terephthalic acid and ethylene glycol, linked together via an ester bond. Hence the popular name polyester, which is mostly used in the textile industry.

The ester linkage can be cleaved by hydrolysis to transform PET waste back into its monomer constituents. Current chemical methods of PET recycling require the use of organic solvents at high temperatures and pressures to achieve depolymerization into monomer derivatives in practical yields.

Exploring the possibilities of using ball milling in the process of PET depolymerization, Dr. Vjekoslav Štrukil from the RBI Laboratory for Physical-Organic Chemistry successfully decomposed PET into monomer terephthalic acid at ambient temperature and pressure, with terephthalic acid being also the starting material for the production of this plastic.

Mechanochemistry has recently become one of the most promising fields of chemical science due to its extremely high efficiency, simplicity, speed, and the ability to significantly reduce the use of toxic organic solvents or completely avoid their use in chemical reactions.

‘’Although the International Union of Pure and Applied Chemistry (IUPAC) ranked mechanochemistry, as well as the degradation of polymers into monomers, among the top ten innovations in chemistry that will change the world, an effective mechanochemical PET degradation has not yet been described in the scientific literature’’, says Dr Štrukil.

In the latest study Dr Štrukil describes a highly efficient alkaline hydrolysis of waste PET in the solid state at ambient temperature and pressure, achieved by mechanochemical ball milling with PET conversion and monomer isolated yields up to 99%.

Excellent yields were also achieved by the so-called vapor-assisted aging of manually mixed or pre-milled solid mixtures of PET and sodium hydroxide in a humid environment or in the presence of alcohol vapours. Aging in alcohol vapours represents an even milder route to PET depolymerization with 99% conversion at room temperature.

"Some of the experiments started just before the lockdown in March, followed by an earthquake. Of course, all this has slowed down and almost completely shut down the research. This meant those results were completely lost and we had to start our research all over again after the lockdown. However, that surreal situation has brought some new ideas, so when I returned to work in May, I focused my research on the aging of PET plastics at ambient temperature and pressure in vapours of different liquid phases such as acetonitrile, methanol or ethanol ", explains Dr Štrukil.

Published results show that mechanochemical milling and vapor-assisted aging, as two complementary solid-state techniques, have the potential for alkaline degradation of waste PET plastics and PET textile on larger scales as well. The described methodology could serve as a platform for the development of new and efficient environmentally-friendly processes for production of terephthalic acid from waste PET abundant in the environment, instead of non-renewable sources such as fossil fuels. 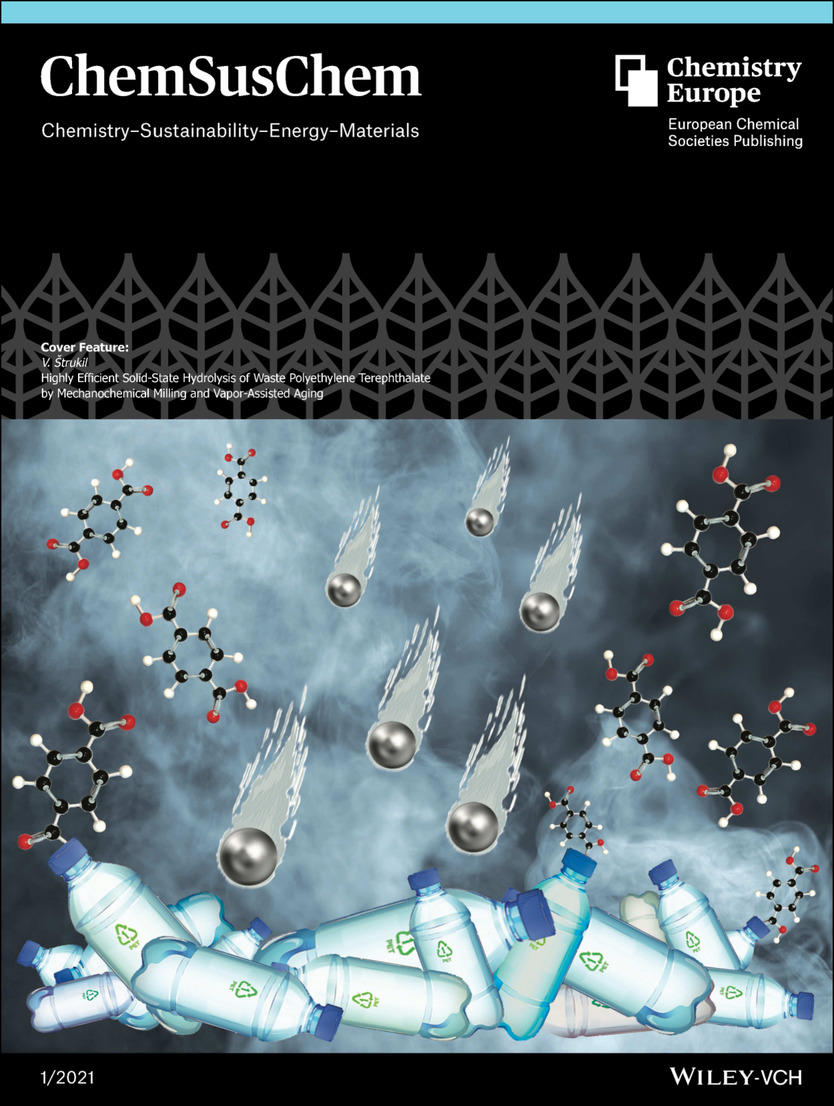