The RBI Capital Project Worth 72m EUR Goes On

Following the Government`s approval of the MSE proposal for the additional allocation for the RBI capital, structural project, this largest research institute in the Republic of Croatia is getting a new glow! O-ZIP starts this year!

The Government of the Republic of Croatia has adopted the proposal issued by the Ministry of Science and Education (MSE) on increasing the allocation for the project 'Open Scientific Infrastructural Platforms for Innovative Applications in the Economy and Society' (O-ZIP), the capital structural project of the Ruđer Bošković Institute (RBI). The financing of the 72 million euro worth project is foreseen within the European Commission's Operational Program 'Competitiveness and Cohesion' for the financial period 2014-2020 (OPCC) 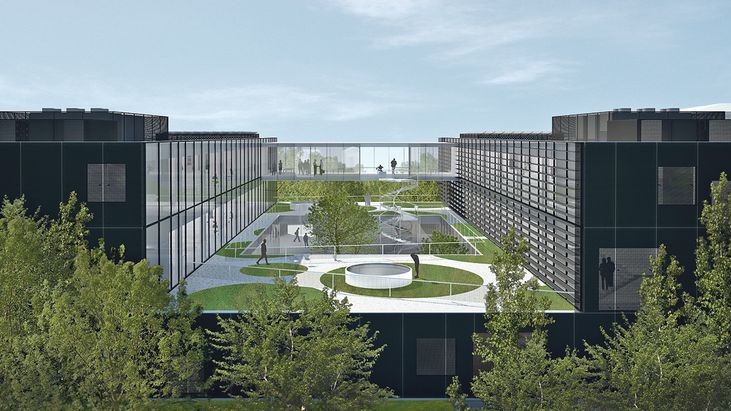 The O-ZIP project is the fourth national project of strategic importance and represents the largest investment in research infrastructure in the Republic of Croatia in the last thirty years.

''During the formation of the OPCC financial allocations, the O-ZIP project was assigned an operational budget of 60.7 MEUR. This allocation was based on an indicative projection of costs based on the state of the construction and scientific equipment markets in 2012 and did not take into account the transposition of the revised Energy Performance of Buildings Directive into Croatian national legislation, which occurred July 2013.

While the scientific equipment market has remained relatively stable and some of the foreseen equipment costs are even reduced in 2018/2019 by comparison with 2012, the same cannot be said for construction costs. Indeed, the fact that the market costs associated with construction works in Croatia have soared since 2012, combined with the fact that there are significant costs associated with the unforeseen requirement for nearly zero-energy buildings, has resulted in a scenario under which the O-ZIP project is no longer possible to realize, in its entirety, within the 60.7 MEUR allocation,'' said Dr David M. Smith, the RBI Director.

Thanks to OZIP, we will acquire sophisticated research equipment aligned with the existing expertise of Ruđer's scientists and the needs of the Croatian economy.

Serious work on the O-ZIP project began in 2012. The project concept was developed as part of the RBI’s long-term strategy in the context of the then imminent accession of Croatia to the European Union.

The O-ZIP pre-feasibility study was completed in 2013 and shortly afterwards, the project was selected by the Ministry of Science, Education and Sport to have its documentation financed under the second science and technology project (STP2), supported by the World Bank. In 2014 the project enters the ongoing OPCC, while the preparation of the RBI Feasibility Study begins in 2016. That means eight years have passed since the first project plan.

The OZIP project represents the first major investment in the RBI infrastructure since its founding. The funds will be used for the renovation of the existing facilities and construction of the new ones featuring bio-medical sciences, marine and environmental research, advanced material and technology research, and information-communication sciences and technologies, as well as congress centre.

Besides the necessary upgrade of the RBI infrastructure, the O-ZIP project will also enable the supply of state-of-the-art sophisticated research equipment compliant with the expertise of scientists and the needs of the economy of the Republic of Croatia.

"Thanks to OZIP, we will acquire sophisticated research equipment aligned with the existing expertise of Ruđer's scientists and the needs of the Croatian economy," explained Dr Smith, recalling that even this outdated and vintage infrastructure did not stop the RBI scientists from achieving excellent results and positioning the Institute as the strongest research institutions in Croatia in withdrawing funds from EU funds.

Neither has the current pandemic. Moreover, despite the current situation hardened even more by the recent earthquake that hit Zagreb in March, the RBI scientists have continued to work diligently and contributing to the fight against the coronavirus epidemic through several initiatives.

In support of this statement, Director Smith points out, the recent success of the RBI scientists from the  Laboratory for Advanced Genomics, led by Dr Oliver Vugrek, who have managed to sequence the SARS-CoV-2 virus genome isolated from patients in Croatia. This was a joint success of the RBI team in cooperation with their colleagues from the Department of Biotechnology, University of Rijeka, the Rijeka School of Medicine and the Institute of Public Health.

''This joint success confirms that Croatia has both the technical and human resources that place it along other countries contributing to the understanding of the SARS-CoV-2 virus,'' states Dr Smith. Moreover, the RBI scientists will continue to fight the novel coronavirus and disease COVID-19 within the just completed call for research projects on infectious diseases caused by coronaviruses issued by the Croatian Science Foundation (HrZZ).

The RBI scientists have applied eight projects within the two categories of the HrZZ call i.e. 'Immune response and development of novel diagnostic approaches to COVID-19' and 'Development of new vaccines, treatments as well as drugs and agents for the COVID-19 inhibition' while they are project partners for additional twenty applications.

"Although COVID-19 is currently in focus, it is necessary to constantly, and not only in times of great crises and threats, raise public awareness of the key role of scientists worldwide. They work hard every day in all fields as to be able to timely respond to present and future challenges to the well-being of humanity.

It is in this context that today`s  conclusion by the Croatian Government should be viewed. This is the recognition not only of the importance of investing in science and scientific research infrastructure, but also of the strong research capacity of the RBI, '' concluded Dr David M. Smith, the RBI Director.

The RBI launched O-ZIP project for the 21st century