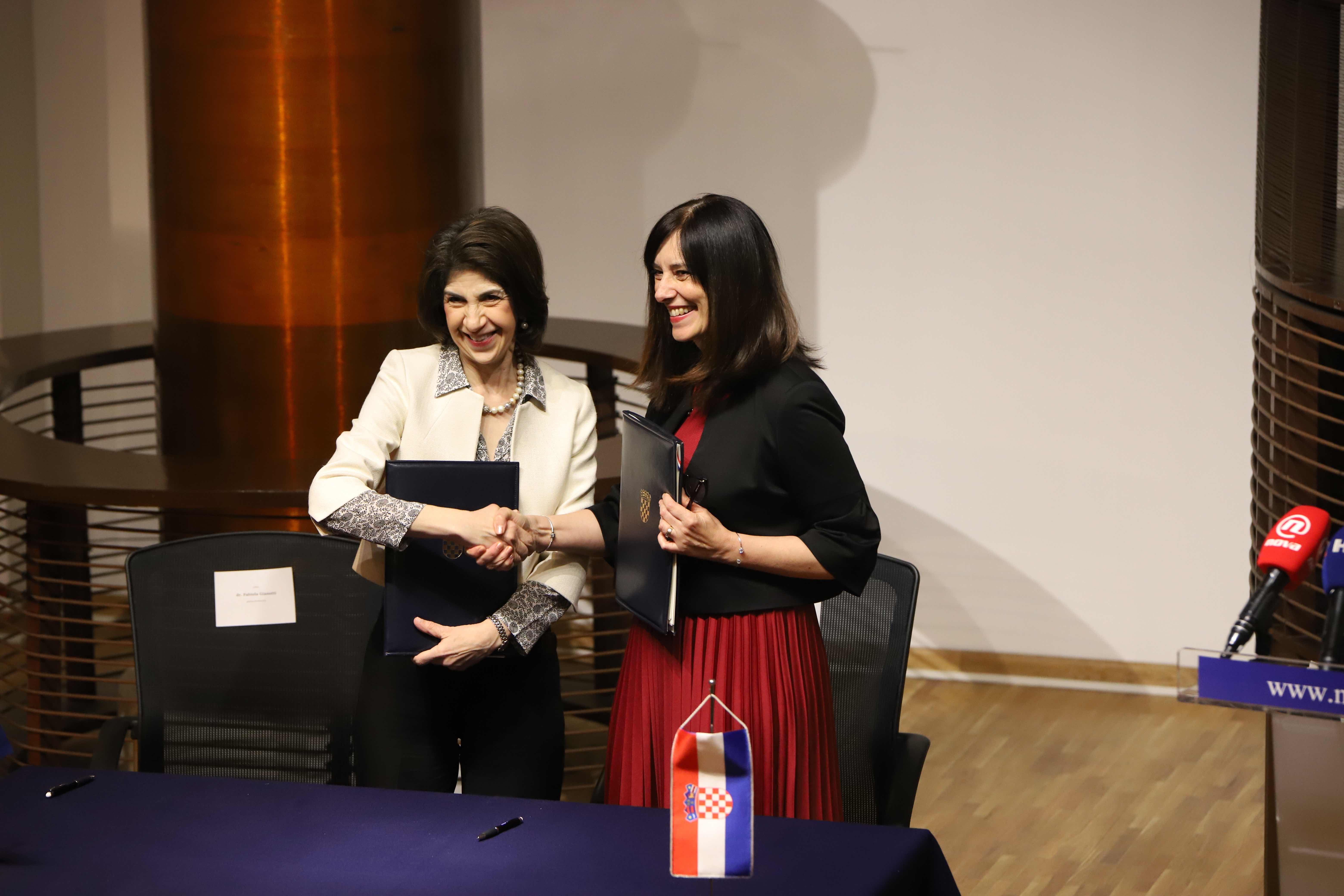 Today, the Director-General of CERN, Fabiola Gianotti, and the Minister of Science and Education of the Republic of Croatia, Blaženka Divjak, signed an Agreement admitting Croatia as an Associate Member of CERN.

Zagreb. Today, the Director-General of CERN1, Fabiola Gianotti, and the Minister of Science and Education of the Republic of Croatia, Blaženka Divjak, in the presence of Croatian Prime Minister Andrej Plenković, signed an Agreement admitting Croatia as an Associate Member of CERN. The status will come into effect on the date the Director-General receives Croatia’s notification that it has completed its internal approval procedures in respect of the Agreement.

“It is a great pleasure to welcome Croatia into the CERN family as an Associate Member. Croatian scientists have made important contributions to a large variety of experiments at CERN for almost four decades and as an Associate Member, new opportunities open up for Croatia in scientific collaboration, technological development, education and training,” said Fabiola Gianotti.

“Croatian participation in CERN as an Associate Member is also a way to retain young and capable people in the country because they can participate in important competitive international projects, working and studying in the Croatian educational and scientific institutions that collaborate with CERN,” said Blaženka Divjak.

Croatian scientists have been engaged in scientific work at CERN for close to 40 years. Already in the late 1970s, researchers from Croatian institutes worked on the SPS heavy-ion programme. In 1994, research groups from Split officially joined the CMS collaboration and one year later a research group from Zagreb joined the ALICE collaboration, working with Croatian industry partners to contribute to the construction of the experiments’ detectors. Scientists from Croatia have also been involved in other CERN experiments such as CAST, NA61, ISOLDE, nTOF and OPERA.

CERN and Croatia signed a Cooperation Agreement in 2001, setting priorities for scientific and technical cooperation. This resulted in an increased number of scientists and students from Croatia participating in CERN’s programmes, including the CERN Summer Student Programme. In May 2014, Croatia applied for Associate Membership.

As an Associate Member, Croatia will be entitled to participate in the CERN Council, Finance Committee and Scientific Policy Committee. Nationals of Croatia will be eligible for staff positions and Croatia’s industry will be able to bid for CERN contracts, opening up opportunities for industrial collaboration in advanced technologies.