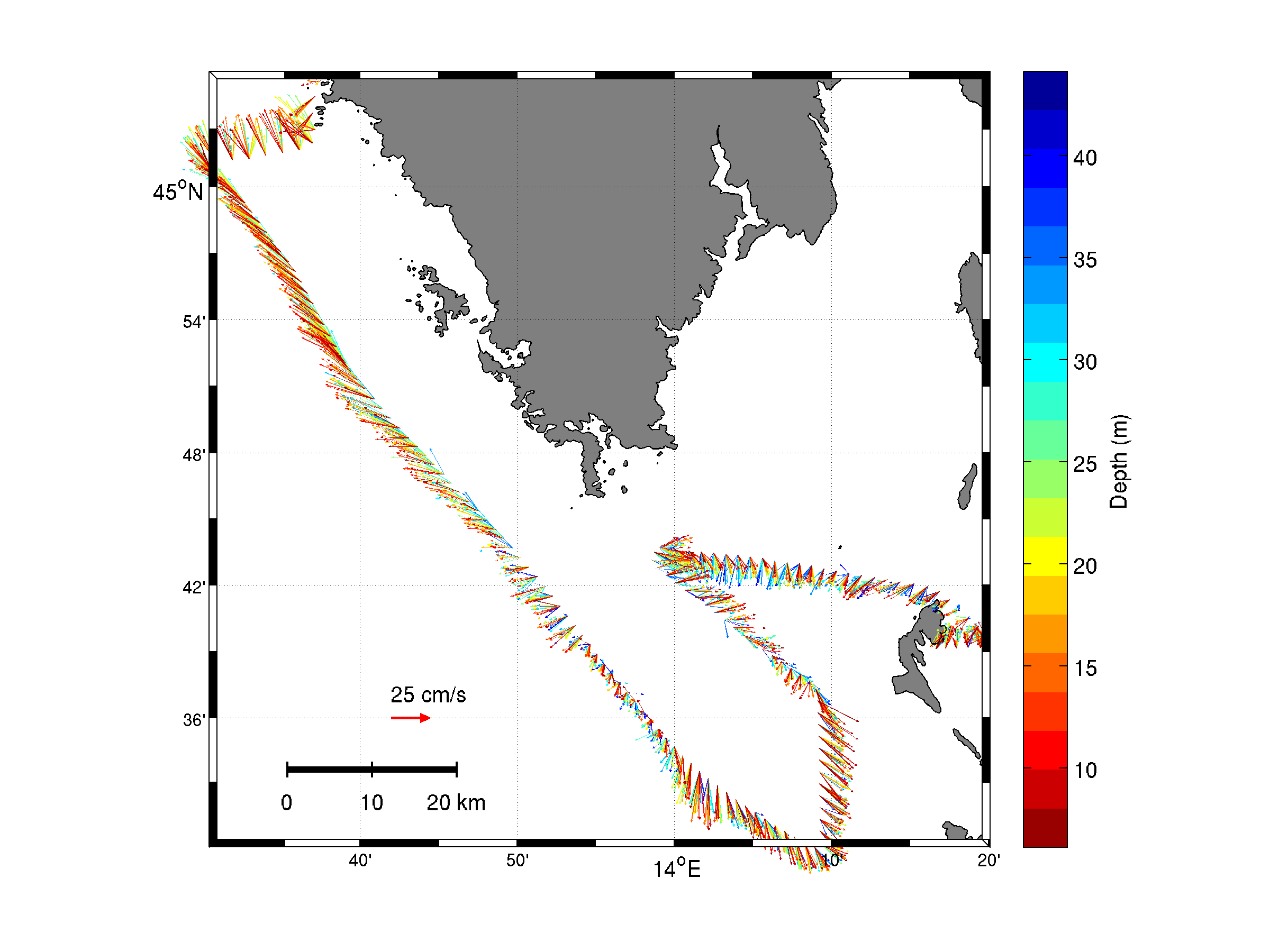 Using advanced numerical techniques and data assimilation (ROMS 4D-Var) at the same time with modern observations in a dynamically consistent way we aim to improve knowledge of the Adriatic Sea dynamics. During the project we will explore open questions in the field of physical oceanography of the Adriatic Sea, such as:

This type of the measurements could arguably prove hypothesis on the importance of  the East Adriatic DW contribution to the overall northern Adriatic DW budget. While measuring synchronously at the all important entrances of the Kvarner Bay, related to the DW dynamics, we can as well determine time-evolving dynamics of this socio-economically important region.  ROMS 4D-Var system is a powerful tool capable to provide insight into a optimal observation setup, predictability and limits of the linearized adjoint techniques for a shelf sea as the Adriatic.

It is important to say that results from the project could serve as basis for many other research fields as ocean biology (DW bringing O2 at the bottom), chemistry or geology, or even applied like oil spills, integrated environmental planning, where correct dynamics are of a crucial importance. The project team members come from the four different institutions: Ruđer Bošković Institute, Faculty of Sciences, Meteorological and Hydrological Service, and Hydrographic Institute bringing unique competences for the proposed project to succeed. Last but not least, it is important to emphasize that after the project completion, all the insitu collected and model data will be made available to the scientific and applied research community. 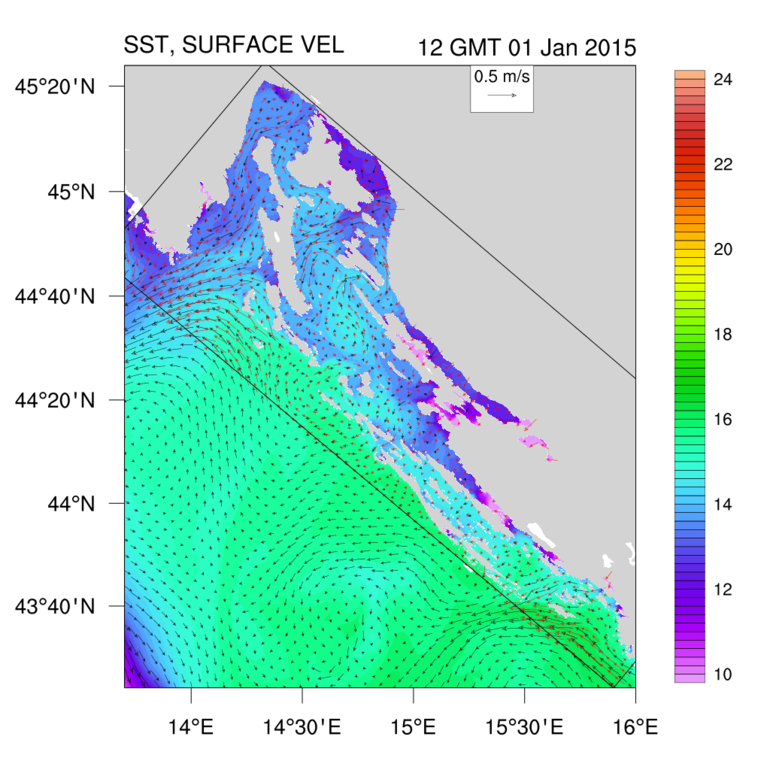 This is especially true where boundary conditions are part of the data assimilation control vector and can be altered via data assimilation itself. In these systems nested, child solution can be decoupled from its outer, parent, solution and special care must be taken to avoid complications (Janeković and Powell, 2012). During the minimization process one has the ability to adjust the model initial state, atmospheric forcing and boundary conditions in order to move the solution closer to observations, taking into account the time-evolving model and observation errors in a dynamically consistent way. The 4D-Var system provides powerful tool for resolving and analysing dynamics of the open ocean and coastal seas providing an insight and enabling explanation of many physical intricacies.

The Adriatic Sea, as the northernmost region of the Mediterranean Sea, is characterized with fast dynamical processes in physical, chemical, biological, and geological realm. Its shallow northern part (with depths up to 40 m), strong Po river inflow (mean annual flow ~ 1500 m3/s), one of the strongest tides in the whole Mediterranean Sea (Janeković et al., 2003; Janeković and Kuzmić, 2005), and spatially complex and strong Bora wind induced circulation (Kuzmić et al., 1988; Orlić et al., 1994; Kuzmić et al., 2006) makes it an ideal test bed for the activities proposed in this project. Fast changes and extreme events found in the region could also provide an early indication of climate changes, hence making dynamical representation of physical processes in the study area crucial in both short and long term.

Middle and southern Adriatic Sea regions, on the other hand, are important for many additional physical processes ranging from the dense water formation (one of the densest in the Mediterranean), and its path and accumulation (Vilibić et al., 2004; Vilibić et al., 2013; Mihanović et al., 2013), to processes related to the steep shelf inducing internal waves. In the Adriatic the steep shelf is descending toward its deepest region – the south Adriatic Pit (with depth up to 1200 m), having on its south-eastern border the Otranto Strait through which it communicates with the Ionian Sea. 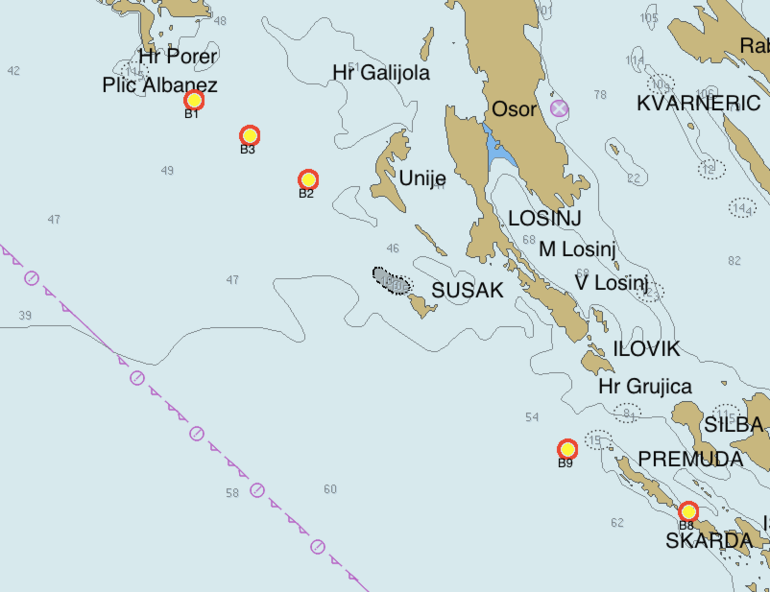 Current physical oceanographic knowledge of the Adriatic Sea is primarily based on either observations made at the sea surface via remote sensing techniques (e.g. satellite sea surface temperature), or in a water column via sporadic conductivity/temperature/depth (CTD) and/or Acoustic Doppler Current Profiler (ADCP) measurements or on theoretical work with or without numerical modelling support. The two approaches are usually applied separately. The only method that can combine the best of both worlds (the empirical and theoretical), in a dynamically consistent way, is the data assimilation. Advanced methods like 4D-Var can resolve and help understand many currently open issues, and gain new knowledge in research topics in global or local (e.g. Adriatic) frame.

Just to name a few:

In the proposed project we plan to use ROMS (Regional Ocean Modeling System, Shchepetkin and McWilliams, 2005) with 4D-Var data assimilation along with field observations, already existing or specifically made during the proposed project. Numerical ROMS model will be forced with realistic atmospheric momentum, heat and fresh water fluxes obtained from atmospheric numerical model. The project team has experience and uses operationally the ARW-WRF- Advanced Research Weather Forecasting System, as well as the outputs from the Aladin/ARPAGE model run operationally by the Croatian Meteorological and Hydrological Service. In addition, the fresh water rivers fluxes based on the observed river transports will be setup at a high resolution numerical model grid. Such calculations are CPU expensive; their execution is partly possible on our existing HPC cluster and fully feasible with the computational upgrade proposed in this project. 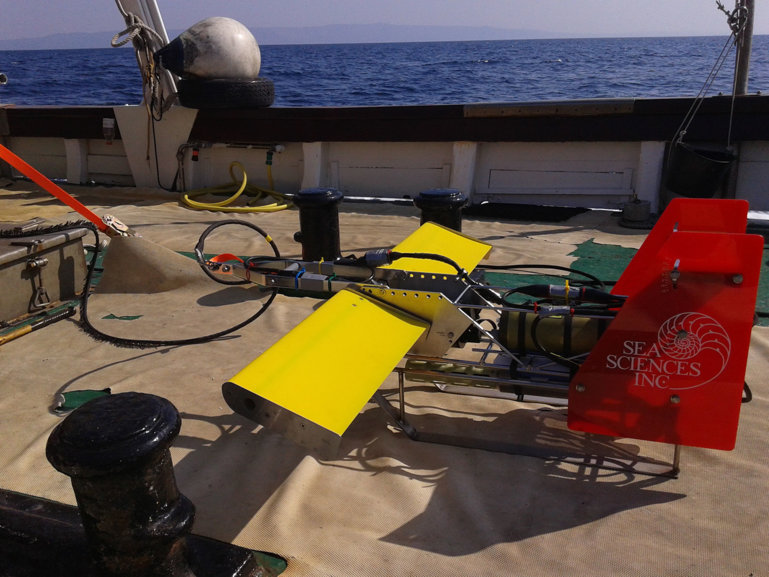 A use will also be made of the national Isabella cluster. Beside in numerical modelling, the project team has extensive experience in conducting field measurements with CTDs, ADCPs having at its disposal a spool of 10 ADCPs (Teledyne – RDI), 10 Sea Bird CTDs (4 x SBE16+, 1 x SBE49+, 5 x SBE26+), and a towed undulating computer-controlled CTD profiler. A locally operated receiving station provides acquisition and near real time data from NOAA polar orbiting satellites. Complementing the acquisition is a software system for advanced analysis and derivation of SST.

Expected project results, providing the answers to the posed fundamental questions, should also serve as the basis and source of information and data for many other scientific projects, requiring the knowledge of the Adriatic Sea dynamics and circulation. Multidisciplinary fields involving physical, biological (i.e. DW as a source of O2 at the bottom), chemical and/or geological aspects, as well as more application oriented works involving transport and fate of the oil spills, maritime safety and search and rescue missions, or even integrated environmental planning, could all benefit from our results. In the future, this project could be extended to evolve into a real-time operational model of the Adriatic Sea, helping to meet the requirements of the Croatian legislation as well as the EU marine frame directives.

Employing the expertise and advanced knowledge in both fields – field work and modelling, combined through a 4D-Var system, the assembled team can obtain improved picture of the relevant physical processes at high resolution, in both space and time. The project team members come from the four different institutions: Ruđer Bošković Institute, Faculty of Science, Croatian Meteorological and Hydrological Service, and Hydrographic Institute bringing unique competences for the proposed project to succeed.

Last but not least, it is important to emphasize that after the project completion, all the insitu collected and model data will be made available to the scientific and applied research community.

Results from the 1st year

Results from the 2nd year