ASYMPTOTIC SYMMETRIES OF ELECTROMAGNETISM AND GRAVITY AT SPATIAL INFINITY. 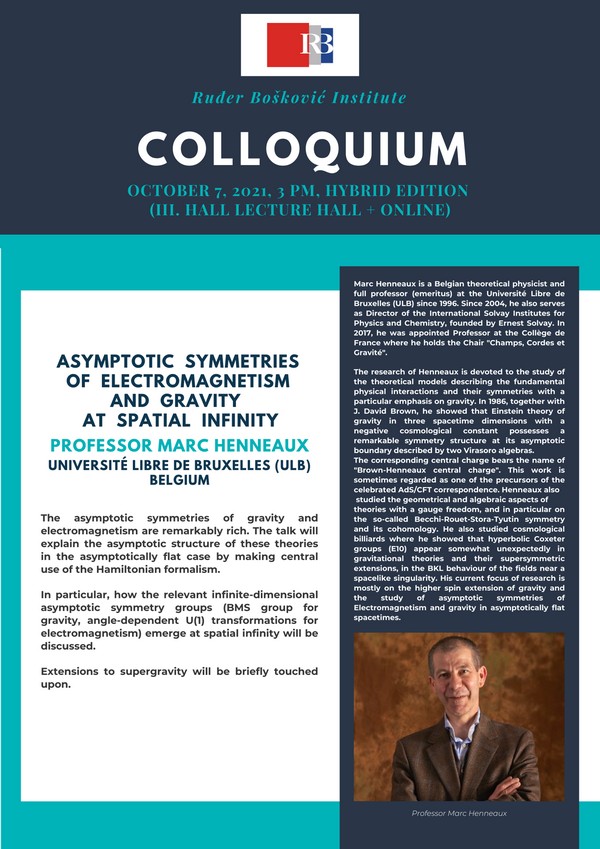 The asymptotic symmetries of gravity and electromagnetism are remarkably rich.

The talk will explain the asymptotic structure of these theories in the asymptotically flat case by making centraluse of the Hamiltonian formalism. In particular, how the relevant infinite-dimensional asymptotic symmetry groups (BMS group for gravity, angle-dependent U(1) transformations for electromagnetism) emerge at spatial infinity will be discussed.

Extensions to supergravity will be briefly touched upon.

Marc Henneaux is a Belgian theoretical physicist and full professor (emeritus) at the Université Libre de Bruxelles (ULB) since 1996. Since 2004, he also serves as Director of the International Solvay Institutes for Physics and Chemistry, founded by Ernest Solvay. In 2017, he was appointed Professor at the Collège de France where he holds the Chair "Champs, Cordes et Gravité".

The research of Henneaux is devoted to the study of the theoretical models describing the fundamental physical interactions and their symmetries with a particular emphasis on gravity. In 1986, together with J. David Brown, he showed that Einstein theory of gravity in three spacetime dimensions with a negative cosmological constant possesses a remarkable symmetry structure at its asymptotic boundary described by two Virasoro algebras.

The corresponding central charge bears the name of "Brown-Henneaux central charge". This work is sometimes regarded as one of the precursors of the celebrated AdS/CFT correspondence. Henneaux also studied the geometrical and algebraic aspects of theories with a gauge freedom, and in particular on the so-called Becchi-Rouet-Stora-Tyutin symmetry and its cohomology.

He also studied cosmological billiards where he showed that hyperbolic Coxeter groups (E10) appear somewhat unexpectedly in gravitational theories and their supersymmetric extensions, in the BKL behaviour of the fields near a spacelike singularity. His current focus of research is mostly on the higher spin extension of gravity and the study of asymptotic symmetries of Electromagnetism and gravity in asymptotically flat spacetimes.